#83 - My Grandfather was a Spook, but not spooky 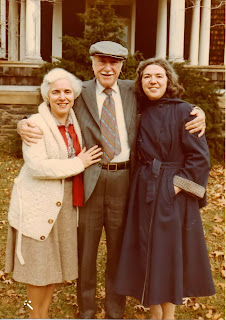 My maternal grandfather Charles Tilton is in this blog: he is several posts. He and my grandmother lived in Jenkintown, Pennsylvania until World War 2 came along.
When the US entered WW2, my mother was in 7th grade. And although Charles (finally) had a job he liked, by 1942 he signed up for the US Army Air Corps (called the AAF, the predecessor to the US Air Force). When Charles was deployed, his wife and family moved to Adams County, PA, close to relatives and within a few years my mother & her sister went off to college.
But their brother was much younger brother so was home with his parents the entire time. This uncle kindly updated me of my grandfather's work most of which was after my mother was in college, or married with a family.
My uncle's information expanded my knowledge of Charles'  his military and postwar career as a military officer and a civil servant. Though Charles set out to be a landscape designer, but somehow became a Spook. That is, he worked in intelligence.  And I was told he worked for the Pentagon. You never know...
Most of this post is from my "guest blogger," my uncle. It covers a period of his life I had only sketchy information in previous posts. The post covers from when Charles entered military service early in World War 2 till he officially retired. (Thank you, Uncle Bill!)
~ Charles B Tilton’s Jobs from World War 2 On~
Charles not only came out of the war "unscathed," he also made an important contribution to the war effort.
He was an intelligence officer in the 390th Bomb Group (H), at Framlingham, United Kingdom.
He briefed the B-17 missions to the crews, interrogated them after the missions, and interpreted their bombing photos to assess the damage done.
CB Tilton's Bombing Missions over Germany 1945 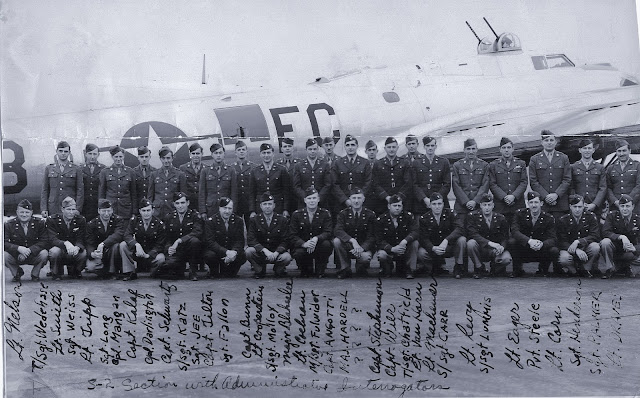 Charles had cut a manila folder into two strips and hand-wrote the key points of the nature and value of the target, the route to it, the expected German defenses, possible alternate target, and other pertinent information. 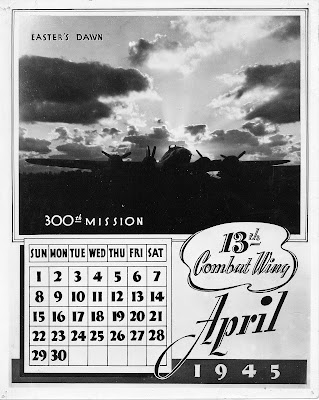 [His son] donated his briefing notes for the notorious Schweinfurt mission to the Air Force Museum in Dayton, Ohio, USA.
~ After the War~ At the end of the war he started a landscaping business in Flora Dale, PA.
After he had landscaped the properties of all the wealthy potential customers in this area, mostly doctors plus the president of Masland Carpets, he had to fold up the business.
~ Back to Active Duty~
1948 comes to mind. During the reactivation period Charles  went back into Active Reserves for the [Berlin] Airlift.
As a USAF Reserve officer, he applied to go back on active duty. The Berlin Airlift started just then, fortuitously, and he was activated and assigned as chief of intelligence for the airlift.
Berlin, Germany was deep inside the Soviet Zone, but the city itself had French, English, and US Sectors, besides the Soviet Sector.
NATO [North Atlantic Treaty Organization] was created during the Airlift (in 1949), so it may have become a NATO operation, but it was not a rebuilding of Europe project.  It was a skirmish in the Cold War.
Charles' role was Chief of Intelligence for the Berlin Airlift, which was a joint English/US operation to save Berlin from starving and freezing to death when the Soviets blocked off all the land routes.
However, he downplayed the importance of that significant-sounding job because the Airlift was basically a cargo-hauling operation. However, the crews did have to fly over Soviet-owned territory.
At the end of the Airlift Charles was chief of wing intelligence for Rhein/Main AFB, near Frankfurt (where his wife Elizabeth and son joined him).
At the end of that tour, he was assigned to select and study strategic targets in the Soviet Union for four years, in D.C.
He returned from the Air Force assignment in Frankfurt in January of 1952.
~ Back in the USA ~
Back in the USA from 1952 to 1956 he was in the CIA "targets" section in Washington, D.C.
~Then Back to Europe Again ~
Then Charles was assigned to Naples, Italy, and it was a NATO job.
There he represented the US Air Force in a "joint" role, rubbing shoulders with officers from other NATO participants.
All 12 NATO nations (NATO was a response to the former USSR's efforts to basically take over Europe) sent officers to the various headquarters.
The NATO located in Naples is for the whole Southern region, including the Middle East to the extent that NATO gets involved there.
The original HQ of NATO was in France, but DeGaulle pulled out, and the Supreme Headquarters Allied Powers in Europe.
SHAPE  (Supreme Headquarter Allied Powers in Europe) moved to Brussels, Belgium, where it is today.
Eisenhower was the first SHAPE commander, I believe.  I know that's what he was when he retired and then ran for president.
Charles was at Naples, Italy between 1956 to 1960, but it was also a military job.
Although in fact, the military really had little to do with rebuilding Europe.  That was mostly State Department and their implementation of Marshall Plan, I think. [George S Marshall was the US Secretary of State at the time].
In 1956 Charles was working as an intelligence officer in the Armed Forces South NATO headquarters near Naples, Italy, working with NATO officers from Greece, Turkey, Italy, Portugal, etc., in all aspects of headquarters intelligence work.
~ And Back to the USA ~
After which, in 1960, he was assigned as Deputy Commander.
Then, in his final year, he was Commander of the Air Force Intelligence Training School, which at that time was at Sheppard AFB in Wichita Falls, Texas (the school later moved to Colorado).
But, as a Reserve officer Charles could not legally remain on active duty past age 60 and was forced to retire.
As he was older, that is, he was 39 when he joined, he could have gotten 20 years needed for retirement had he not been in the Inactive Reserve for three years after the war.
However, and fortunately, the law provided for a partial retirement pension for cases such as his.
~But Then ~
After a year or less of driving around and enjoying life Charles decided to go back to what he knew best, and applied for a Civil Service opening in the Defense Intelligence Agency (DIA).
He worked at Arlington Hall Station for part of his time there, and in the basement of the Pentagon for part of it (I think the Pentagon was first).
I believe he was in that job for about ten years, and the only thing I know about it is that he was in charge of the "Cuban Biographies" office during the Vietnam War (when Cuba was not in the spotlight).
Charles had two brilliant Army lieutenants working for him there.  One time he was tasked to brief the Secretary of the Army on the whereabouts of Che Guevara.  He worked hard to prepare a first-class briefing (which I'm sure he did).
Afterward I asked him what his answer to the question was.  "We don't know," summed it up!
----------------
Proof of him Spooking: Intelligence Analyst (VA death certificate); no rank given (Adams County PA Veterans list) 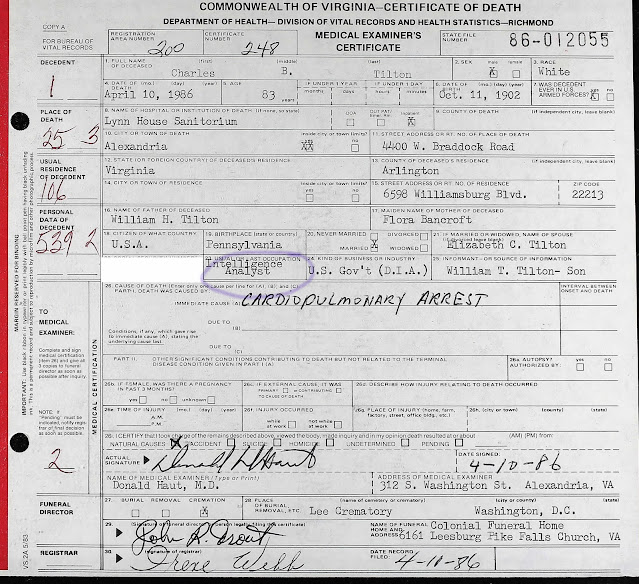 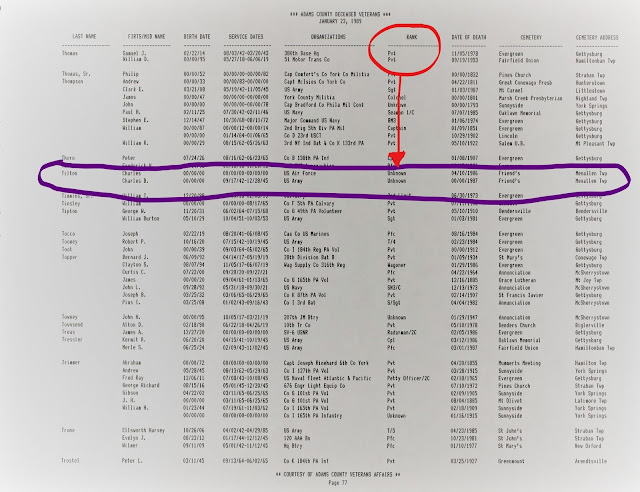 1 Thanks to "Uncle Bill" for the writing.

Posted by PastRemains at 30 October