“...people forget the words you speak to them, but remember how you have made them feel...” - Frank A. Patterson Jr. 1

“Kindness is a language which the deaf can hear and the blind can see.”  attributed to Mark Twain

Or just a family which was full "kindness, goodness, and love"?

My great grandfather Chester Tyson and his wife Bertha Hawxhurst filled a house full of children (house is pictured at the top of this blog). They had to have household help to keep things running in the house. Bertha usually had more than one person helping her and when my grandmother was old enough, she was drafted to help out as well.

Daisy Orner was a "regular" who worked for many years at the Tyson homestead or "Hill House" as some people referred to it. Near the end of my grandmother's life, she moved back to her home (which was owned then by her daughter). Apparently Daisy heard Elizabeth, child of Chester and Bertha, was in town and wrote her a letter. I don't know what prompted it.
Daisy must have been very old at the time as my grandmother was likely in her late 80s. She describes the household as one "filled with kindness, goodness, and love" ( and who would know better than someone who was there everyday?)
In my estimation, that would make the Tyson-Hawxhurst family unforgettable.

Dear Elizabeth
I am the one that walked the path through the apple orchard to the beautiful Bertha and Chester Tyson Estate and there [sic] adorable family to help care for them.
A family of children that was always full of kindness, goodness, and love.
Never did I hear an unkind word - that leaves precious memories.
The first day I came to work was taken in to the library to do some cleaning were [where] I first seen


two small girls playing—Margaret and Elizabeth.
I remember the long dining room table where I made roast beef gravy and mashed potatoes for you to eat. The old oven by the kitchen door ..I made home made bread. The day the family of us would all husk sweet corn, cut it off and fill four trays to dry for to store for winter time
I am sending ? of your wedding
Daisy Orner

#75 - Trouble Making : Battle of Gettysburg and the Underground Railway in Adams County, PA

Two Stories of Trouble Making
Genealogy is boring. Walking through a field of broken headstones, or looking through old books, or at stained, black & white photos of old people is boring. Unless you knew the people, or know the stories. Personal history can be everything that a movie or play is: funny, tragic, mundane, sweet, horrific and etc.
In 1987 my mother's sister Mardy (Margaret Tilton) recorded her mother's (double) cousin's reminisces in 1987.  Corrine was the best candidate to interview at the time as she was 10 years older than cousin (Elizabeth, Mardy's mother). Also, Corrine's father (Edwin C Tyson) was nearly 10 years older than Elizabeth's father. Not only that, he (Corrine's father) had been keeper of the family genealogy.
I came across a transcription of the 1987 interview.
I excerpted two short stories told by Corrine (Tyson Lambert), so you'll read just a gist of the story, and neither is in perfect, fluid sentences.
The first story is of her newly-wed grandmother (Maria Edith Griest, w of Charles John Tyson) and her great uncles.
The second is of her Maria's parents Cyrus Griest and Mary Ann Cook (Griest) who were Quaker participants in the local Underground Railroad in Adams County, PA (see map below to see how close their area was to Gettysburg).
*******
Story #1 When Trouble Came To Gettysburg
Little Brothers Run Off to “Rescue” Their Big Sister from the Battle of Gettysburg
As told by Corrine Tyson Lambert: [Charles J Tyson’s granddaughter]:
“Grandpa (Charles Tyson) had a hand for money… He was always doing something else. He had started with a photographic studio in Gettysburg, he was there until year after the battle.
And they stayed, Grandpa and Grandma, stayed living and working in Gettysburg until 1869.
Then the photographic business [called Tyson Brothers] went to his apprentice William Tipton.
Around that time, he had moved from Gettysburg up to the [Quaker] Valley. And he bought…he worked for his Father-in-law [Cyrus Griest].”
Corrine: “You see when she (Maria Griest his wife) was married (1863) her two little brothers [Griest brothers] Amos [age 15] and next boy both used to play with her--well, they were worried, because she was married, and she was in Gettysburg.
And now part of the war was between them and her [they lived north of Gettysburg].
One day they heard somebody say, “I wish we knew whether Maria was safe,” because she had just been married [and living in Gettysburg].
And so these two little boys got up early and started on foot, without telling anybody.
They went missing.
They got halfway [to Gettysburg] and there was a barn there (for years I saw this barn).
It was the one where they had gone, and they slept in the hay mow, and in the morning the farmer found them and sent them home.”
S: “They were headed for the battle of Gettysburg?”
Corrine: “They were headed for the Battle of Gettysburg. They were going to find Grandma, their sister, those two little boys. One of them was Uncle Amos. He was the youngest. And the next, must have been Uncle Cyrus.”
[Their journey would have been well over 10 miles]

Story #2 Quakers Running an Underground Railway Station in north of Gettysburg
As told by descendant Corrine:
“Cyrus [Griest], whose wife was Mary Ann Cook...
My grandma [Maria Griest] was their oldest daughter.
Before Grandma was married, when she was 18--that was when the slaves hid in the caves up on Yellow Hill.
Yesterday we went up there, and drove in back of that house and up in there.
And I could see where the path is still there that they took to go up there…I knew just about where it was and I could see where the path went up.
The slaves would hide in the caves and come down at night.”
S: “And you can remember your grandparents talking about that?”
Corrine: “I remember my Grandmother [Maria Griest Tyson] told me all about that. And she taught in the schoolhouse which is the second floor of the springhouse and that is still there.” 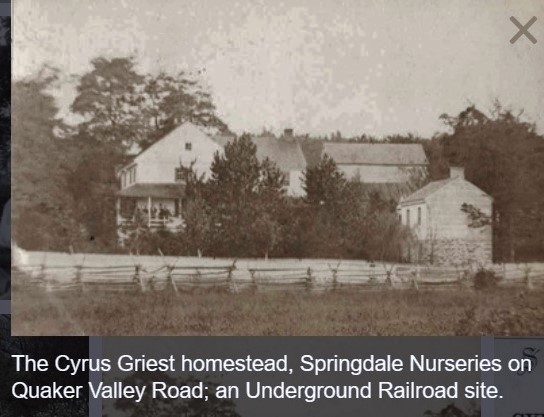 For more information see this: http://www.menallenfriends.org/

Posted by PastRemains at 16 August No comments:

When my father spoke of his grandfather, his mother's father, he _always_ said he was a small man "with bandy legs" (I don't know why the legs were mentioned). My dad was born in 1929 and by the time his grandparents were in his conscious life, they still had a brood of children at home in a cramped apartment in New York City or one of its boroughs.

I never saw a good photo of John JL Barnwell for this was the era when the the poor, and lower classes had precious few photos, and those they had were well-handled and often didn't survive for long.
The photo I finally saw of him over 10 years ago was after his work accident which rendered him essentially crippled for life. He had to sit home while his wife was the superintendent and cleaner of the building.
When I saw this photo below he looked (to me) that he was of average height.

But then I found this photo, jumped on My Heritage, uploaded it, colorized it and then enhanced it with their nifty tool.
In this photo, I know the man he's with is 5 feet, 4 inches, which puts them about the same height. And, thanks to camera capturing his feet, I now know what my father meant by "bandy legs."
Posted by PastRemains at 09 August No comments: