Now and then I get lucky. This post is a result of finding a "story" written about the Hauxhurst family by a Hauxhurst before the 20th century.

The Hawxhurst family has been on Long Island for centuries, and intermarried with some of the same Quaker families.This post will contain a genealogical piece of the Hawxhurst [also spelled Hauxhurst and Hawkshurst] family and written by an ancestor was was local to the Westbury, Long Island, my great-great grandfather, William Ephraim Hawxhurst's story.
WE Hawxhurst was the husband of Marianna Hicks (separate post on her), and compiled this summary in February of 1888 (well over a century ago).

He writes that the information comes from an extract in his "possession that appears to have been taken from the town records," with his own additions.

What appears in brackets are my additions. The names in bold indicates one of my direct ancestors. I have placed a Roman numeral next to each generation.
Hawxhurst Genealogy
"A short account of my father's family taken from an extract in my possession that appears to have been taken from the town records with additions made by myself Wm. E. Hauxhurst in Feb. 1888.

Their children were: William, Mary, and Sampson.
[II] Sampson Hauxhurst and Hannah Townsend
[Sampson & Hannah] …lived for several years at Cedar Swamp, where he had a large property derived from his grandfather Ruddick, his father and his father-in-law.

Re: Sampson & Hannah (Townsend)’s Children & etc:
Somewhere between 1710 and 20 he [Sampson Hauxhurst] removed to Matinecock (now called Buckram).
Now, 1888 known as Locust Valley), where he also had inherited property.
Here for several years the records show him actively engaged in buying and selling land. Probably to bring his estate into a compact form when he died.
His children were:
[III] William [Hauxhurst] and Benjamin engaged in mercantile pursuits in New York. The latter being successful. The former [William] was at first prosperous but some of the numerous misfortunes to which mercantile operations are subject, lost his property.

-Sampson and Joseph remained on their father's estate where their farm was bought  by James Cock.

[V] William, the son of Joseph Hauxhurst
William (my grandfather), the son of Joseph, then removed to Kill River Hollow.
He afterward removed to Oyster Bay in what has been known as Poverty Hollow.
Re: William Hauxhurst's Wife & Family
William, my grandfather, married Violette [Violetta] [Allen/Alling] They had children.
[VI]Ephraim Hauxhurst's marriages:
Ephraim Hauxhurst’s occupation, William writes:
My father was a schoolteacher in his younger days. He taught first at Huntington where he married his first wife, Julia Leffert.

He also taught in Oyster Bay and at Glen Cove [Long Island] where he married his second wife, Mary Ann McKenny. She lived some two years.

He then taught school in Westbury [Long Island, NY] and purchased the farm where I now live and married after a few years my mother, Charity Titus, daughter of Timothy of Wheatly. They had children.
William E Hauxhurst continues with his own family:

William E. [himself] and Marianna [Hicks] have children:

The Hauxhurst Genealogical Story of  1888 ends here.
More on William E Hauxhurst and the Tyson family in other posts. Below a photo of the author (or "guest blogger") of this post, William E Hauxhurst.
From the book:
American Ancestry- Giving The Name and Descent, in the Male Line, Americans whose Ancestors Settled In the United States Previous To The Declaration of Independence, A.D. 1776, VOL. X. Albany, N. Y. : Joel Munsell’s Sons, Publishers. 1895.

Posted by PastRemains at 25 August No comments:

#27- Ephraim Cock Hawxhurst and Charity Titus and Their Family

Ephraim C Hawxhurst was the son of William Hauxhurst and Viotetta Allen (or Alling), and a longtime member of Westbury Monthly Meetings.

His father, William Hauxhurst  was born 1761 and died 1831 while his mother was Violetta Alling [Allen] was born in 1765 and died 1819. It looks like they had seven children who survived to adulthood, Ephraim C being the third eldest.

Ephraim was given a middle name Cock which reflected yet another Long Island family he was descended from. The Cock (Cox, Cocks, Coke) family was had settled in Matinecock, Oyster Bay in the 1600s.
This sample page from a book (publ. 1914) shows a testimony of some early Quaker families listed on the right-hand page. The book is “The History and genealogy of the Cock, Cocks, Cox family, descended from James and Sarah Cock, of Killingworth upon Matinecock, in the township of Oyster Bay, Long Island, N.Y”

Titus Family
Charity Titus was of the of the Long Island Titus family--another long-time Quaker family of Long Island.
The Titus family is arrived first to New England and then settled in Long Island about 1650. Her parents were likely distant cousins as they both bore the Titus surname and Quakers within a region frequently married distant cousins (or, sometimes, first cousins).

Their children and grandchildren
1-Elizabeth was born February 7, 1835. Elizabeth married Oliver Van Cott.
-Her brother,the son (William), noted that this sister’s husbandwas of Dutchess County NY.  And, that he (Oliver) was a descendant of one of their grandmothers, Jemina Titus.  Jemima was his grandfather Timothy's sister, and she married John Van Cott. They were distantly related. (Got that?)
William noted that Elizabeth and Oliver Van Cott had two children at the time he was writing (in mid or late 1880s): Sons were: William E. Van Cott, and George T. Van Cott.

3 William Ephraim, (subject of Post # 34) was born May 19, 1838. William E Hauxhurst married Marianna Hicks (subject of Post #31).  William made a nice summary of genealogical notes, including the ones mentioned here.
William and Marianna had six children. Their youngest child was my great grandmother, Bertha Charity.

Marianna Hicks of Long Island
Marianna Hicks is my last direct ancestor named Hicks. She was the daughter of Isaac Hicks and Mary F Willis: the children of Isaac Hicks and Mary Fry Willis were:
1 Gilbert (1838-1922),
2 Edward (1840-1920) and
3 William C (1845-1846-died as an infant), and the subject of this post:
4 Marianna, my great-great grandmother

Marianna Hicks, my great-great grandmother, was born September 27 1842 in  Nassau Co, New York and died August 13, 1915 in Nassau, County, New York. She is the last of the Hicks family  in my direct ancestry.

Childhood Toy for Marianna
Marianna's  father Isaac  Hicks made  her a doll's bed to play with as a child. It is adorned with  handmade canopy and sheets.  Here are my photos of it:

William Ephraim Hawxhurst was born on May 19, 1838 in Old Westbury, Long Island, New York and he died February 5, 1908 in prob. Hempstead, New York.
William  Hawxhurst  was the son of:

NOTE: The name Hawxhurst nearly as often spelled Hauxhurst, and in documents sometimes it appears as Hawkshurst.
CHILDREN:
The first child Mary was born in 1862 and the last child Bertha was born in 1881-so there was a 19 year age span between the first and last born child.

Relatives & Friends: Orthodox & Hicksite Friends Westbury
Apparently the Hawxhursts were tight with the local Orthodox Friends. In the picture below, the woman who is second from left is "Aunt Margaret Hauxhurst" - Margaret is William Hawxhurst's sister.
Bertha labeled several photos of the school she attended for instruction, and this one happened to have several Orthodox Friends.
Left to Right: Henrietta Titus, Margaret Hawkshurst (sis to WE Hawkshurst), Mary Post, Sarah Titus, Sarah Bunyan.
(Recall that W.E. Hawkshurst's mother's maiden name is Titus).

Posted by PastRemains at 08 August No comments:

Which Willis? Which Mary?
I looked through naming patterns (first names) and then at the Quakers on Long Island who intermarried. I began to despair when rather running into a genealogical brick wall, I was dealing with a profusion of possibilities.

Mary Fry Willis’ Middle Name To the Rescue
I took advantage of Mary Willis’ middle name “Fry” beginning with the assumption that it was a surname in her family--and Quaker.
I then was lucky enough to find a letter written by a family member who had grown up in the area, and was acquainted with all the families on LI; a letter written about 1910.
The writer said Mary Fry Willis was given the name “Mary Fry”  in honor of one of her great grandmothers.
So now I knew she had a direct ancestor with that name thus narrowing my choices. She was also descended from a Mary Fry, and the Fry family was a Quaker family, likely from Long Island.
I was hopeful that I'd narrowed the possibilities to Quaker females on Long Island in the pre-Revolutionary War period who named Mary Fry.
Indeed, I found only 1 Mary Fry (or Frey) from the colonial era:
So, Mary Fry Willis was named for her great-great grandmother, Mary Fry who was born in December 1712 in Westbury, NY and died May 28, 1800. 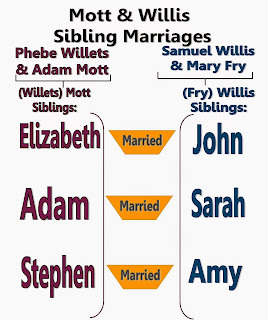 Marriage & Family:
Mary Fry Willis was 19 when she married the Isaac Hicks (subject of Post #29). They wed March 24, 1836 on probably in Jericho Meeting, Long Island, NY.

Isaac Hicks was 21 years old when she married him. They lived on Long Island the rest of their lives while Isaac commenced his nursery business (see more in Post #29).

Residence and Death:
I would imagine that Mary Fry would have been quite busy as Isaac was tending to building up the Hicks Nursery. They lived in Old Westbury on Long Island, NY.

Photos and Miscellaneous Comments
Of the photos I have, they were taken when she was rather old. Her granddaughter, Bertha C Hawxhurst had saved most of the ones I have.

Bertha, who grew up on Long Island and knew her grandmother, wrote on the back of this one a comment:
“Grandmother Hicks-very precise, neat --and stern!”
Of Mary Fry Willis' siblings listed above, I bolded her sister Rachel Willis to draw attention to the fact that Rachel wed Isaac Hicks' brother, Samuel Hicks.

Below is a garden photo of Hicks & Willis relations.
I own a (separate) labeled photo of Rachel Willis Hicks, so I'm certain she's the middle-aged woman (wearing glasses) looking at the camera.
Seated near her is likely (but I'm not sure) Rachel’s husband (and Isaac’s brother), Samuel Hicks. The young lady on the left might be Rachel and Samuel’s unmarried daughter Anna.
Seated on far right is Isaac Hicks and Mary Fry Willis (Hicks).


The photo below is of the Isaac and Mary Fry Willis (Hicks) when they were quite elderly. It was probably shortly before she died.

Posted by PastRemains at 01 August No comments: