When 8 years old Peter Sanford Bancroft came to Western Pennsylvania with his parents, who settled on a farm near Meadville, PA. His father was the Rev. Earl Bancroft, a retired minister and local preacher of the Methodist church. His mother was a daughter of Grove Pinney.

PS Bancroft worked on the farm, attended county schools and then Allegheny College, from which he graduated in 1855 magna cum laude.
Career 1 - Professor of Greek & Latin
For the next few years he was Professor of Greek and Latin at Madison College (now part of Waynesburg U).
Shifting: Part 2 - Civil War and an Officer
In September, 1861, he joined the army of the Union and was made Second Lieutenant in Company E, One Hundred Eleventh Regiment, PA Infantry.
On September 17, 1862, in the battle of Antietam, his right arm was shattered by a bullet. While in hospital suffering from this wound he was promoted to the rank of Captain.
March 16, 1863, he resigned and was discharged on surgeon's certificate of disability. In Apr. 1863 the U.S. War Department created the "Invalid Corps" made of worthy disabled officers and men who had been in the army.
It was variously called Invalid Corps or Veteran Reserve Corps, and Bancroft signed on and he was appointed First Lieutenant in the Veteran Reserve Corps. In December he was appointed Captain and later assigned to the Third Regiment of that corps.
This appointment was confirmed by the issue of a Captain's commission with 'the advice and consent of the Senate' and signed by President Abraham Lincoln. His grandson Charles Tilton had possession of the commissioning signed by Lincoln until he sold it to antiques dealer in the 1900's.

Bancroft continued in the service with the Invalid/Veteran Reserve Corps until February 1866, nearly a year after the close of the war.

Widower and Move to Town-Part 4 - Witherspoon Institute
In 1877 PS Bancroft and his family moved to Butler. In the wake of his personal economic struggles and the nationwide postwar recession, he decided to go into education.  He took the Witherspoon Academy, a school begun as a Presbyterian school and subsequently bought by Lutherans, and turned into a non-sectarian private school.  His reorganization grew as the newly re-formed Witherspoon Institute, and he was for a number of years Principal (manager and administrator).
Part 5 - Newspaper Editor
While running the Witherspoon Institute, he was also a staunch supporter of the cause for which he fought. He'd become a member of the (fairly new) Republican Party. Eventually former war veterans who were fellow Republicans felt they needed a publication.
In March, 1889, he entered newspaper work in the office of The Butler Eagle, and October of 189 [?}, he became associate editor of the Butler County Record.
He worked as the Associate Editor until May 6, 1916, ten days prior to his death, when he was taken ill.

PS Bancroft was living with his daughter Flora, her husband William Tilton, and his grandson, Charles Bancroft Tilton in Butler at the time of his death.

From
The Butler Citizen, Thursday, November 26, 1908 - Under "Butler School History"
On Dec. 11 1819, a literary and religious institution was established by the Allegheny Presbytery and called Witherspoon Institute. Rev. Loyal Young was the first principal and David Hall assistant. School opened May 13, 1830, in the basement of the Presbyterian church, and the following year the first Institute building was erected on Main Street [in Butler, Pennsylvania]. In 1865 the Butler Academy and the Witherspoon Institute were united. It cos continued until 1877 when the property was sold to the First English Lutheran church for $6000. In 1879 Witherspoon Institute was turned into a non-sectarian school with  Prof. P S Bancroft at the head of it and J C Tintsinan [sp?] associated with him. The school flourished under the leadership of these two able instructors, and in 1882 boasted of 172 pupils. Prof Bancroft continued until 1887 when he closed it and took up other work.

NEWSPAPER WORK, BUTLER, PA
The Butler Eagle was established in February, 1870, as a Republican journal.  A company, the greater number of the members of which were veterans of the War of the Rebellion, was organized with the object of giving to the county a newspaper which would expound the ideas of the soldier or military element of the Republican party, and inculcate lessons of patriotism from their point of view….under the management of Robinson & Carson, (While) they did not surrender a single Republican idea, they made politics, even in bitter campaigns, agreeable; for they surrounded attacks on the opposition with credits for the good parts of the enemy, and thus, giving justice where due, won respect.
The Eagle is credited in Rowell's Newspaper Directory with a weekly circulation of 1,800. It is well printed and edited, while its news columns tell of the thorough effort made by the publishers to gather the news items.
From March, 1888, to October, 1889, Professor Bancroft held a position in the local department of this paper.
On removing the office to Butler, the name was changed to the Butler County Record, and the first number, under this new name, was issued June 6, 1888.
On October 1, 1889, Prof. P. S. BANCROFT, formerly of the Witherspoon Institute, and later in the local department of The Eagle, was engaged as associate editor—a position he still holds.
Messrs. Herr and Bancroft are earnest workers in the newspaper field and aim to make their columns as interesting and newsy as they were in the lively days when the great Petrolia oil field yielded up its surprises, jokes and tragedies daily.
It is now a neatly printed journal of thirty-six columns, politically independent and carefully edited. The certified circulation is 1,700.
Source: History of Butler County Pennsylvania, R. C. Brown Co., Publishers, 1895


SOURCES:
1 Ancestry.com
2 Fold 3
3 Photos Collection of ACharity Higgins (NYS)
4 Education: Ancestry.com
5 Internet Archive
6 Most information about adulthood was sourced from the genealogical and historical information held in Butler County Library, Butler, PA. Thanks to the volunteers and librarian in the Butler  (Butler, Butler, PA) Library for being so helpful.
Posted by PastRemains at 26 January 1 comment:

#2 - Charles J Tyson Gets Busy with Gettysburg & Other Work

Charles and Isaac Tyson established the photography studio in Gettysburg, and hired a young assistant, a William Tipton (who became a close friend of Charles) Charles and Maria Griest of Menallen Township  married in April 1863, shortly before the battle of Gettysburg (first few days of July). They moved and just setting up house as a newly-marrieds when they were forced to flee Gettysburg for the countryside (they fled to Littlestown). They returned to find their house had been occupied.
Charles & Isaac and Tipton got on the road to take photos in the after the battle.
If you see their photos of the battlefield, note they do not include photos of the causalities of war.
War is not part of the Quaker tradition, and it was thought that photos of the battlefield would glorify what is repugnant to the Quakers.  Still, the Tysons (& Tipton) took many photographs of the battlefield and its environs.
They also took many, many photos of soldiers: both Union and Confederates sat for a photo. Many photos which they sold were later imprinted with another photographer's name (common practice). For more information on this, it is well told in the book: Gettysburg: A Journey in Time by William A. Frassanito. Here is a Tyson Bros photo of the Camp Letterman Hospital Tent from the National Archives. 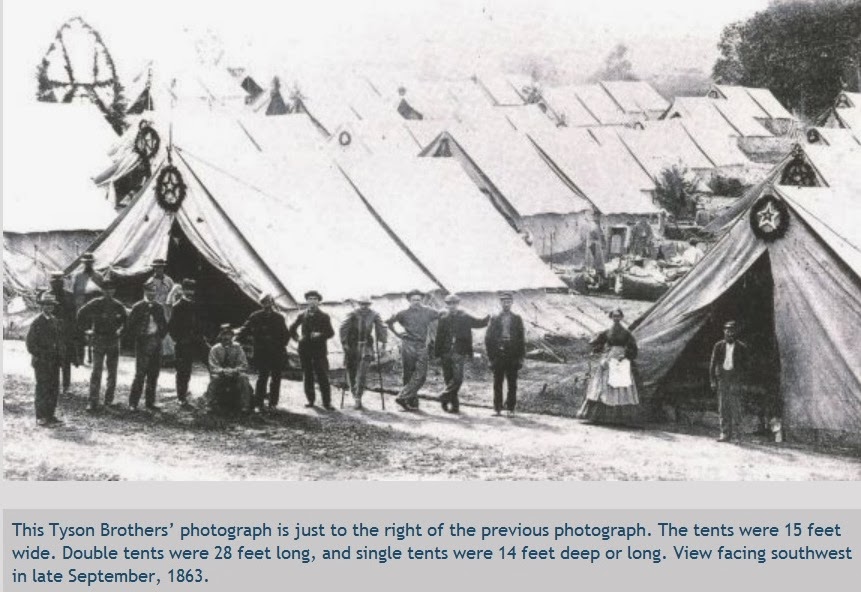 On November 19, they made their way to the ceremony in which President Lincoln delivered his Gettysburg Address at the dedication of the Soldiers National Cemetery, a photographing the crowded road in front of the platform. The tree (a honey locust) was called the Witness Tree, to both the battle and the famous speech, was about 150 feet from the speakers platform. (The Metropolitan Museum of Art in New York now holds this photo).
Charles was energetic.
The local newspaper noted that he “possessed a progressive spirit which he carried into all his undertakings. He was not satisfied with any kind of doing but his effort was to excel. It was not in the spirit to have things better than others, but to have them done as well as they could be done.” and,  “His influence was always for better conditions.
He took an active interest in everything involving the advantage and benefit of the community. Indeed, Menallen Township and Bendersville have in many ways felt his influence for better things.”
Eventually the brothers parted--Isaac also married a cousin of Maria (Charles' wife, Rachel Griest), and they moved to Philadelphia where he continued in photography. Charles kept his interest in the photography studio until 1865 when he sold it.
He continued buying and selling a share in the studio to William Tipton (Tipton named his first born son Charles Tyson). Charles eventually finished with it once and for all when he sold it to Tipton in 1880.

In 1864, he had purchased 1/3 interest in Springdale Nurseries, Cyrus Griest & Sons (his father-in-law).
In 1865 he moved out of Gettysburg, to Flora Dale, near Menallen Meeting and in 1867 bought the entire interest in Springdale Nurseries.
In 1869 he bought the farm of 167 acres. He bought and renovated a house which was named “Mapleton” in Flora Dale, PA. 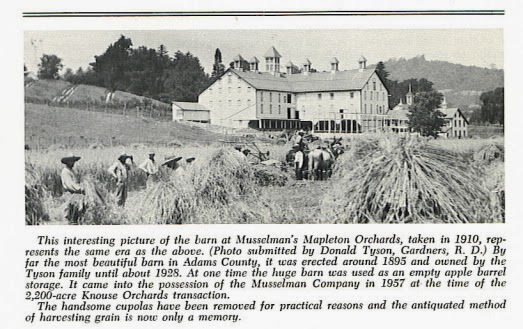 Then, in 1881 he became a charter member of Susquehanna Fertilizer Co of Baltimore, and eventually became President of the plant. The fertilizer plant had its financial ups and downs but generated more income than the nursery business.
He had big dreams and big plans: He was an ardent supporter and funder of the building of the Gettysburg & Harrisburg Railroad.
He built an enormous barn and started a 1000-acre orchard.  He had the first bathtub with running water in Adams Count.

His father, Edwin Comly Tyson, lost his wife and Charles' mother, he came to live with Charles and Maria.

Charles was generous with his children. To son Chester (my great grandfather) he gave a “house to fill with Tysons" (which they did), and to their daughter Mary Tyson Peters, another house, and their son Edwin (Ned), he gave Mapleton.
He and Maria built and moved to a house in a place called Guernsey (they called the house Loma Vista).
[The next two posts will have two other men-and a bit of what went on in their lives around the Civil War.]

Posted by PastRemains at 24 January 2 comments:

Charles Tyson Meets Maria Griest
My great-great grandfather, Charles J Tyson and his brother Isaac Tyson, young, energetic Quaker (Friends) moved from their home in Philadelphia to set up a new business: a photography studio in Gettysburg, PA in 1859.
As the Gettysburg Compiler announces (as well as several of their own ads):
What they could not know then is that the War between the States would commence and Gettysburg would become a famous battle.  And many of their photographs would become prized possessions of collectors and museums. (That's a separate story, all together). They were still settling in and at the same time needed a shop assistant.
Charles quickly became drawn to the country side of the county and became friends with other Friends, notably a Cyrus Griest and his family of Menallen Meeting, some several miles north of Gettysburg. Of course, it helped that not only were the Griests outgoing and friendly, but that Cyrus had a beautiful and intelligent daughter, Maria. *Quakers used First Day for Sunday, and Seventh Day for Saturday.
[Transcript of a transcript of a letter from Charles J Tyson to his sister Ruth Anna Tyson (b. 1840-d.1914). “Original copy in possession of Edith C. Peters”]