#80--How Old? The Hawxhursts of Shropshire or of Hawkhurst!?

The fun of having English ancestors is that English surnames can  give you a good lead on the origin of a particular branch of the family. Names like "Cook"  are not particularly helpful, but place names can be. My maternal lineage is the one I can trace back the furthest with reliability.

My mother's mother's maiden name was "Hawxhurst, and they came from Long Island." Hawxhurst is not a particularly common name in North America. I knew that the Hawxhursts had come from England.

I started with the assumption that the “Hawxhurst” surname came from the original place a Hawxhurst ancestor lived. English surnames often grew from their location. I found out that surname use in England grew between 1400s-1600s as populations grew and social customs changed.

I searched online for a location in England which sounded similar to Hauxhurst. And I found one! There is a village in Kent, in south east England by the name of “Hawkhurst”--a likely candidate to me.

How Old is the Village of Hawkhurst?

I’m hazarding a guess that at some point some of my Hauxhurst ancestors were living in “Congehurst” or Hawkhurst, England in the 800s AD. I wondered how old the village was and the village website said it was a Saxon manor which the Danes burned in 893 AD.  That is a long time ago. Ask yourself, when did England actually become England? Wikipedia claims it was 927 AD.

>>Hawkhurst is a village in the borough of Tunbridge Wells, Kent. The oldest known settlement was the Saxon manor of Congehurst, which was burnt by the Danes in 893 AD. There is still a lane of this name to the east of the village.

The name Hawkhurst is derived from Old English heafoc hyrst, meaning a wooded hill frequented by hawks – 'Hawk Wood'.  And hurst (hyrst) in a place name refers to a wood or wooded area.

The 11th-century Domesday Monachorum refers to the village as Hawkashyrst, belonging to Battle Abbey.

In 1254, the name was recorded as Hauekehurst; in 1278, it is often shown as Haukhurst… By 1610, it had changed to Hawkherst, which then evolved into the current spelling. <<

Back to the Hawxhurst Family:

Next I checked on locations: the village Hawkhurst is in SE England in Kent, but my Hawxhurst family came from Shropshire [alternatively Salop (abbreviated, in print only, Shrops)].

Shropshire is its own county, located in West Midlands near Wales. As mentioned earlier the village called "Hawkhurst" is in Kent, which is not near Shropshire.

I’ll hazard a guess (and in genealogy everything is temporary until DNA proves it’s not) and say that my ancestor, William Hawxhurst, (my earliest known ancestor in Shropshire) had moved to Shropshire from Hawkhurst in Kent (but if not him, then one of his predecessors).

Having thus moved, he would have provided the Shropshire locals a reason to call him “William of Hawkhurst,” which would eventually be shortened to a surname: “William Hawkshurst” (or spelled "Hawxhurst)".

Spelling Doesn’t Count: Genealogists tend to spend more time focusing on the phonetic variations than on the exact spelling of surnames through time.

The name Hawxhurst has been spelled: "Hawkshurst" (mostly in 19th cent and earlier docs) "Hawxhurst" and "Hauxhurst," almost interchangeably. In earlier days, there likely were more variations.

Generation 1 Presumably, William Hawxhurst (of Shropshire) or his family had come from Hawkhurst in Kent. William had at least one son named Christopher Hawxhurst.

A record states: “Christopher Hawxsworth [yet another spelling] married October 15, 1550, Elizabeth. They had William, baptized October 15, 1551.”
And Christopher had another son (Rev) Sampson, my direct ancestor.
Christopher Hawxhurst was the Vicar or “Curate” of St. Chad, Shrewsbury, Shropshire having been appointed to position on the accession of Queen Elizabeth. He succeeded John Marshall (who was ejected on the accession of Queen Elizabeth in 1558 for refusing burial in his church to Mr. Burton of Longnor).
With Elizabeth's ascent to the throne, it was an eventful time.
It suggests that Christopher and/or his father or wife was politically connected to the new Queen for a brief history of Elizabeth's changes see more at end of post.*

St. Chads was a 'Curacy' though it has been styled a Vicarage. The Church of St Chad is a parish church in the area of Stowe in the north of the city of Lichfield, Staffordshire, in England. The current building dates back to the 12th century. 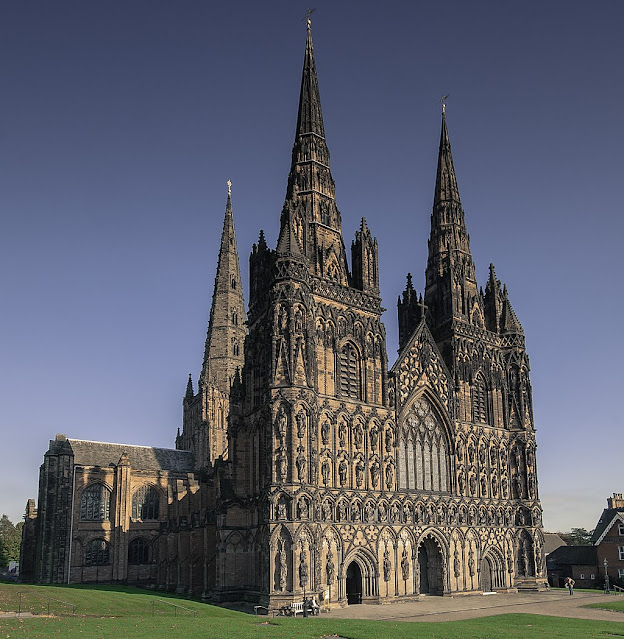 Family:
Samson had at least three children with his wife Alice.
His son Christopher Hawxhurst was born about 1615 in Nuneaton, Warwickshire, England.
Samson died in 1627 in Nuneaton, Warwickshire, England, at the age of 56.
Gen 4 His son Christopher Hawxhurst
Christopher in Nuneaton, Warwick, England. Baptized on 11 Jan 1615 at Dunchurch, Warwickshire, England
(*Warwickshire County Record Office; Warwick, England; Warwickshire Anglican Registers; Roll: Engl/2/1024; Document Reference: DRO 73;Registers. Warwick, England: Warwickshire County Record Office.)
He died aft. 1683 in Matinecock, Long Island, NY.
He immigrated with Robert Coles, and his sister, Mary who had married Coles, arriving in New England before 1643 (Salem and Ipswich).
He soon moved to Rhode Island, and was elected deputy to the Rhode Island General Court. In Rhode Island he married Mary Reddock. They remained in RI for ten years, then moved with Richard Townsend and Joseph Carpenter to Oyster Bay, Long Island, NY.
Once there he bought 70 acres at Matinecock in 1665.
Gen 5 - Children of Christopher and Mary:
~William B c. 1657: Ch: Sarah and William.
~Mary B c. 1660: M 17 Nov  1684, George Townsend
~Jane B c. 1663; M Jarvis Mudge, Ch: Jarvis, Elizabeth, Mary, Jane, and Charity.
~Sarah B c. 1667; M William Crooker, Ch: Robert, William, Samson, Sarah, Benjamin, and Abigail.
~ Samson Hawxhurst (Gen 6)
Samson was B in Oyster Bay, Long Island, NY c. 1670. He died in Oyster Bay, NY on 25 January, 1733.
Samson married Hannah Townsend  on 18 January 1698 (Born abt 1680; D. abt 1757).
Hannah was given 180 acres at Cedar Swamp by her father as a wedding present.
Samson's will dated 23 October 1732, and probated at New York 21 November 1732
Samson and Hannah had Joseph Hawxhurst.
The successive Hauxhurst generations, all born in Oyster Bay, Buckram or Locust Grove:
Gen 7 Joseph Hauxhurst (M Sarah Mott)
Gen 8 William Hauxhurst (M Violetta Allen)
Gen 9 Ephraim C Hauxhurst (M Charity Titus)
Gen 10 William E Hauxhurst (M Marianna Hicks)
Gen 11 Bertha C Hauxhurst (M Chester J Tyson)- my great grandmother
* For more on religious events at the time which may have some bearing on Christopher Hawxhurst having been installed as a curate of St. Chad's.
"When Queen Elizabeth I came to the throne in 1558 her people were divided by religion. Her sister, Mary, had made Roman Catholicism the official religion of the country, but many of the people were Protestant, and there was a growing number of Puritans.
To bring together these different groups and ease religious tensions, Elizabeth came up with what became known as the Religious Settlement.
In 1559 she passed two laws:
1-The Act of Supremacy: making Elizabeth the Supreme Governor of the Church, taking power away from the Catholic Pope in Rome.
(Henry VIII had done the same in his reign, but called himself the Head of the Church, so her title as Governor implied she would be less dictatorial, more tolerant.)
2 -The Act of Uniformity
This made Protestantism England’s official faith and also set out rules of religious practice
and worship in a revised prayer book. Between 1559 and 1563 introduced the acts which made up the Church Settlement.
This returned England to the Protestant faith stating that public worship, religious books such as the Bible and prayers were to be conducted in English rather than Latin. The new Book of Common Prayer was introduced, adapted from earlier Books used under the Protestant Edward VI.
But Elizabeth was careful not to erase all traces of Catholic worship and retained, for example,
the traditions of candlesticks, crucifixes and clerical robes.
By pursuing a policy of moderation she was attempting to maintain the status quo and, although Puritans were particularly upset by the continuance of some Catholic traditions, an uneasy compromise was reached and maintained throughout her reign. "
This information was accessed on Oct 3, 2020 from BBC: https://www.bbc.co.uk/bitesize/guides/zg68tyc/revision/1
Some Sources:

Village of Hawkhurst in Kent: https://en.wikipedia.org/wiki/Hawkhurst

Global, Find A Grave Index for Burials at Sea and other Select Burial Locations, 1300s-Current (Ancestry.com)

Posted by PastRemains at 02 October