How Charles Tyson Made His Parents Proud

Edwin Comly Tyson and Susannah Griffith, Charles' parents, would have been proud of Charles. As a young man he struck out, and learned a trade, settled in a new town, found a gal, had a family and became fairly prosperous.
The point of family history is not to state the facts, but to fill in the "who's, why's and how's" answering questions such as, Why did he do this? Who helped him? How did he make his decision, or find his way? But unless we have recorded information, we can only guess or deduce some of those, and much of it we will never know.
I was lucky enough to find a letter from his son (my gr grandfather's brother) Edwin “Ned” Tyson (b. 1864). Ned was a genealogist and meticulous in his attention to detail. Apparently Ned wrote a letter in response to a letter from Albert Cook Meyers, a distant relative of his. Meyers had a question regarding Ned's father. Ned outlines for Meyers when, how and why his father came from Philadelphia to Gettysburg, PA.
The story was set in motion when my great-great grandfather Charles Julian Tyson decided to move: He headed out of Philadelphia in the 1859.
Below is my transcription of Ned Tyson's letter to Albert Cook Meyers. Just a note: the photo is of Ned Tyson, Charles' eldest son, because Ned preserved so much family history. Though an uncle, he deserves some kind of honor in this space)
Albert Cook Meyers
Moylan, Pennsylvania
January 29, 1940

Dear Albert:
Thy very interesting communication of the 26th finds me temporarily in bed as being the best place in the doctor's belief for me to complete recuperation from the effects of the Farm Show and I have had the Dictaphone moved down to facilitate my taking care of various business correspondence. The clipping for the 1860 Census taken by Aaron Sheely is interesting.
In 1859 Father [Charles J Tyson] left his home in Philadelphia where living conditions were none too rosy to strike out for himself. As he was born in 1838 he was then just under 21 years of age. Just why he started in this direction [towards Gettysburg] I don't completely recall, but he finally landed in York [PA] and called on a photographer at that place asking for a job.
The photographer had plenty of help, but suggested that there should be a good opening for a photographer at Gettysburg and recommended that Father proceed there and look over the situation which he did.
Upon investigation he decided that Gettysburg should be a good starting point, a situation which was concurred in by Judge Wills and several other prominent Gettysburg people whom he consulted.
He found that Judge Wills had a building adjoining and in fact attached to his residence which, with certain alterations, would be suitable for a photographic gallery and upon consultation with carpenters it was determined that the necessary changes could be made for $200.00, and Judge Wills agreed to stake him for the room rent for a year and the carpenter for the carpenter work when Father divulged to them that he just had $10.00 to his name.
It was arranged that the carpenter make alterations at once which they estimated would take about two weeks.

And in the meantime Father returned to York and arranged to work for his board with the photographer previously consulted for the purpose of learning the business, he having no previous workable knowledge of it.

I think it was the following First-day [Sunday] after he had returned to Gettysburg and started a business that he learned of a settlement of Friends [Quakers] up this way [Menallen and Warrington Meetings], and hired a team and drove out to Meeting and was invited home to dinner by Cyrus Griest which proved to be a momentous trip and the start of a friendship which resulted in his marrying Cyrus Griest’s daughter in April 1863.

His business flourished and the report thee sends indicates that by June 1860 he had secured the assistance of his brother, Isaac Tyson, establishing the firm of Tyson Bros. and continuing for several years until Uncle Isaac returned to Philadelphia to open a gallery for himself in that city which he continued the balance of his life, he having in the meantime married a first cousin of Mother’s [Maria E Griest], Rachel Griest.

Father and Mother [Charles J Tyson & Maria Griest] lived on what was then the lower end of Chambersburg Street at the time of the battle [Gettysburg] between the homes of William Boyer who was then a grocery man with a store, which later became Eckerts store, and Annie Hannaway and only a few doors east of John Burner’s home.

They were warned to leave their home on the first of July and left before noon getting as far as Littlestown (south east) where they remained till the morning of the 4th [Jul 4 1863].
-- Ned Tyson 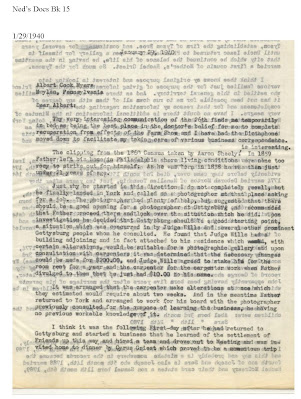 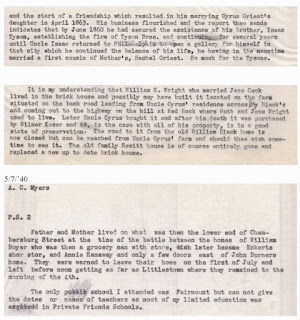 Posted by PastRemains at 14 October