#88- Winter Letters from an Esther Hicks to Margaret Tilton re Isaac Hicks of Long Island, NY

I love winter letters. They are the best. Especially when you have genealogy involved. 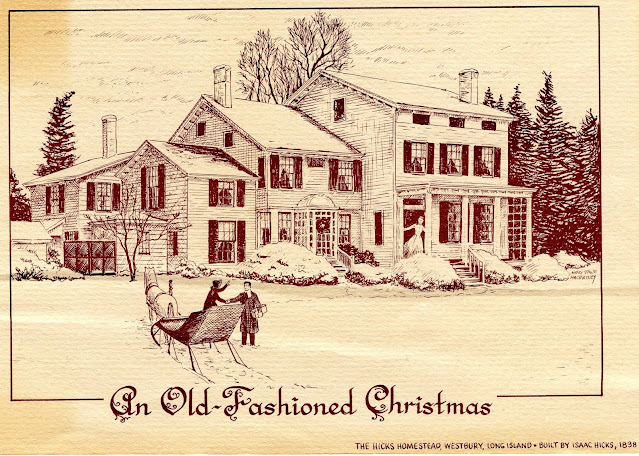 Thanks so much for your letter I am still in Westbury but expect to return to Foulkeways in about ten days.

Did any of your family ever see the book “Isaac Hicks, Quaker Merchant”? He married Sarah Doughty, and their son John D married Sarah Rushmore, our common ancestor (on the Phipps property).

Isaac prospered in NY but retired in 1805 “with enough of the world’s goods” and built the house on Old Westbury Rd. which we knew as a Cocks home thru a daughter’s marriage.

It was sold for very little during the Depression and all Isaac’s 10,000 business records unopened for 130 years or more were brought to “the aunts’ parlor” [Grace & Marietta].

A history professor seeking a subject for a Harvard dissertation learned about them, was permitted access and researched a good publication. We all got to know him-Robert Davison-of nearby Hofstra University.

Isaac, who must be identified as Isaac I (he died in 1820 I think) had worldwide shipping interests. The first vessel flying an American flag to enter the Black Sea was his ship “Thames.” Another vessel was the “Sally.”

Papers for it were signed by George Washington and that document was found by Aunt Marietta in the treasure trove of papers. Well, she kept it and included in the “red books’ as we call them. Don’t tell anyone! – she shouldn’t have done it.

I wish I had known that your mother [Elizabeth Tyson] visited Old Westbury Gardens with a group.
Perhaps  I could have arranged to join her for at least a short time.

Glad she was pleasantly received.  We are impressed with the friendly outreach of the place. - do not think of the Phipps family just as “rich folks.” Many volunteers contribute in all sorts ways.

I expect you have recovered from holiday activities. We had a fine time, ten people for several days with my daughter hosting a Dec 26 lunch, ourselves and Edwin’s descendants in town then.

The IH [Isaac Hicks] book is out of print—might be interesting to seek in book sale or otherwise.

Please tell me where and how Margaret [Tyson/Bouchelle] is.

Thanks you so much for your letter and the books containing all the Meeting records you assembled. What an undertaking carefully completed!
The Phipps family did live briefly in the house John Doughty Hicks built in 1825. They soon moved it south of the turnpike near the house I now have to empty.
It burned in 1910 so that is the end of that. There have been eight Hicks homes in direct descent, ending with Fred who know runs the Hicks Nursery business (started in 1853) and others as well, all of which I can remember and four others (only two gone) and all within about a mile.
Our main highway is the Jericho Turnpike (Route 25). The area now the incorporated village of Old Westbury is on the north side of it. The rich sporting people bought it all up from the Quaker farmers starting about 1900. Now no business is allowed even tho’ the nursery still has twenty acres. Fred could sell only what might be grown on it, but he concentrates on a smaller garden center to the south.

You asked what became of the 1837 house built by our ancestor Isaac Hicks II who changed from dairy farming to the nursery business in 1853.
I was born there, but my parents built one the south side in 1905. We came to call it the aunts’ house (for Grace and Marietta). It descended to my brother Edwin but neither he nor his son wanted to live there. It was bought by the Society for the Preservation of Long Island Antiquities. They renovated it and put it up for sale under their revolving fund, with restrictions. The first owner could rarely be there. That is the girlhood home of your great-great grandmother Marianna [Hicks M. Hauxhurst].

When the big house built by the first Isaac Hicks in 1805 had to be sold at the bottom of the Depression years, all the business records Isaac brought from NY City came to the aunts’ [previously mentioned Grace and Marietta] house for safe-keeping. There were 10,000 letters, a dozen letter books, ledgers and journals.

They all went later to the New York Historical Society, Port of N.Y Authority collection. I actually went there because I thought someone from my generation should see them. A few of the ledgers were brought out for me.

Isaac the merchant’s money was passed on: a record exists that his grandson John D Hicks (a posthumous child b. 1829) decided he would do better investing the money -$10,000-left to him by his grandmother Sarah Doughty Hicks than what he tried to make farming with his brothers.

Our ancestor, the second Isaac [Hicks] must have inherited the same and he also received the 20 acres where he built in 1837 and carried on a dairy farm before expanding into the nursery. He later bought the property on the south side of the turnpike and I believe it extended all the way to the railroad.
Will write more in Westbury.

Dear Mardy,
I am enclosing various papers, copies of originals, with your own books. High praise for all your work on them and thanks for letting me see them.
Occurring south of Westbury is the largest natural prairie east of the Mississippi—twenty miles long and about sixteen wide. Hence the early names Plainedge and Woodedge. In the early days if was used as a common summer pasture and cattle and sheep (with earmarks) were returned to their owners in the fall. No trees grew there.
The aviation industry grew up there (also Lindbergh’s take-off and return) to be succeeded by shopping malls and suburban growth.
I can even remember, though, that it was open land in my childhood. We drove to Hempstead on rutted wagon tracks as the straightest direct way there.

Here is an enclosure of Westbury’s early history written by Harold Hawxhurst, brother of your grandmother Bertha [Hawxhurst who married Chester Tyson].
As I understand it, the house all the family lived in was moved a little north and turned the opposite direction perhaps just before 1900.

The four pages with pictures of many old homes was prepared from records I supplied (as well as the first article, which I wrote).
I had waited until now to send it to you—the map had been prepared for Aunt Marietta [Hicks] by Cousin Harold.
Turn  [it] so Jericho Turnpike goes east and west. I’m sorry this is such a poor print. Anyway, you will see where Marianna Hicks (Hauxhurst) grew up, daughter of Isaac Hicks II.

The “Old Fashioned Christmas” [see above] is a copy of a greeting sent out by our nursery [Hicks Nursery, 100 Jericho Tpke, Westbury, NY]  some years ago. It shows the house where Marianna, Gilbert and Edward Hicks, much smaller then.
I remember, from age 7, when the second story of the middle front section was raised to allow a big front bedroom and indoor plumbing at the back.
The next [?] extension was only one story when built in 1837, roof raised next about 1866, back wing 1874 (big kitchen) Up to 1906, nursery office was in the back parlor. My gr gr grandfather Isaac Hicks II had converted a dairy farm to the beginning of the nursery in 1858.
I was born there—my parents were married in 1900 and built the house across the road, which I’m now supposed to empty, in 1995.

Your story of the supposedly destroyed piano is this –  Emma Jarvis came to teach in Westbury about 1860. (She boarded with the Hicks family) and married son Edward Hicks in 1866 and brought her melodeon [forerunner of the pump organ] from her Cooperstown, NY home.
I believe it was “Preacher Rachel” [b. Seaman, married Abraham Hicks, son of Stephen & Mary] Hicks who when calling, was about to lay her bonnet on it, said, “Isaac, I advise thee to chop it for kindling.”
It remained there till the time the house was bought by the Long Island Preservation Society.
We always called it “the aunts’ house” – Grace and Marietta [Hicks] were quite dominant in the business and in the family.

Great preservers of old records which I am  not trying to get to the right places!
A last enclosure – a copy of a letter written by a young mother whose husband felt duty called him to accompany elderly Elias Hicks on his preaching missions.
He wrote a little later, “I feel clear to build us a new house next year.” (c. 1825)
That is the one on the site of the Phipps mansion.
That John D. [Hicks, of Isaac Hicks I] died in 1829, leaving Isaac II, Lydia, Robert, Samuel, Stephen and (posthumous) John D [she named most of his children] Sarah [R. Rushmore, his wife] brought up six children alone and lived to 103!

If you want further explanation and stories that may be rattling around in my heard, better ask me soon! How long will I live? Doctors have been interested when I relate that I had to go back to 1730 before I could find a maternal ancestor who had not lived to between 90 and 100—and that doesn’t count Sarah at 103 on the Hicks side. (Many of those mothers were over forty –as was I.)
I have rambled on too long with this poor pen and poor writing. How I wish I had taken a business course somewhere along the line. Even so, I could never master modern computers as you are doing—all hail to you!

Where'd I get all this?

1 Copy of the Hicks Home (Isaac--> John D--> Isaac -who built it ) from MB Tilton Walmer Collection. Mine is digital & colorized.

2 Advertising card of "Hicks Nursery" - Many of them. This was mine. AC Johnson, collection

3 Letters between Esther Hicks Emory and Margaret B Tilton Walmer; MBW Collection Mine are digitized copies

4 Book: Isaac Hicks by Davison. My own copy.

Posted by PastRemains at 17 December