#87 - Genealogical Blooper: I Made Rachel Griest A Sister, not a Cousin!

OOPS!
My Ooops! moment comes about once a week--or more if I'm in touch with relatives who give me feedback.  Recently I even re-wrote my grandfather's career when my uncle gave me a detailed account.
Another OOPS! moment was pointed out to me by relatives: I mentioned that a gr-gr grandfather married a Maria Griest and his brother Isaac married her sister Rachel. Not True!
I was partly right: Isaac did marry a woman named Rachel. And the woman was related, but more distantly than I  had thought. But in genealogy, partly right isn't good enough.
Looking back I realized I made assumptions based on the identical last name. I know, what could go wrong?
Let me back up.
There were two brothers: Charles J Tyson (my gr-gr grandfather) and Isaac G Tyson. They moved from Phila to Gettysburg and went into business together.
Their sisters:
1 Rachel Griffith Tyson (1836–1874)
2 Ruth Anna Tyson (1840–1913)
3 Rebecca Webster Tyson (1842–1923)

All three of the daughters married. Rachel and Rebecca lived in Philadelphia. Ruth Anna did too but there is evidence she spent time in Adams County: she died there in Biglerville, PA. She was buried in Philadelphia.

A WIFE FOR CHARLES

BROTHERS WRITE TO A SISTER ABOUT THE GRIEST GIRLS:

After his first visit with the Griest family, Charles wrote a letter home to his sister Ruth.
He left a little space for his elder brother.
Here is a small portion of it from the copy (too long). You will see Isaac's short contribution after Charles signs off at the end.

As Brother [Isaac Tyson] wrote to thee last, I will claim the privilege this time.

I have so much to tell thee I scarcely know where to commence, however, Brother intends to write also so that what I miss he may think of.(several pages later):

I expect thee has said before this “Well I declare I believe my little Brother is in Love.”

No, no Sis, not yet but to speak candidly I think few more visits up there would teach me how it feels to be in that predicament, as these is supposed to have some experience in that line of business.  Probably thee could give me some idea of the first symptoms, but if thee thinks I am wrong in regard to thy superior knowledge of such matters, thee must apply to Sis Rachie.

I think she could enlighten us both upon the subject without a doubt.

Well Ruthie I must soon come to a stop—this is the fifteenth page and it finds me “about played out” to use an inferior phrase.

I was pleased to learn thee had a prospect of soon teaching again. How are you getting along in the knitting business?

I cannot tell when I will get to Philadelphia though I would like to in a few weeks. However, we must wait patiently till the time comes.

Hoping to hear from you thee, I remain thy affectionate

My love to all the family.

I have had the pleasure of hearing the content of the above voluminous letter and take the opportunity of giving my full sanction to all expression of pleasure wherein given. Charlie seems to think me old enough to take care of myself.  I came to this same conclusion and pitched in with all hands generally and Lizzie in particular, occasionally with Maria but found there was no show there when Charlie was about.

-
Maria and Charles wed in 1863, right before the battle of Gettysburg (which is where their new home and their business was).
ANOTHER GRIEST GAL MARRIES A TYSON:
So Isaac had moved to Gettysburg to help his brother put into operation a photography business called "Tyson Bros Photographic Studio." But would he, too, find love?
I'm happy to say that he did.
Isaac's wife was a local woman, a first cousin and neighbor of Charles' wife, Maria. Their father's were brothers, so her last name was also Griest.
Isaac married Rachel Ann Griest  in 1863 as well. Rachel's mother was Margaret Garretson and her father was Amos Griest (brother of Maria's father).
Rachel Ann Griest was born on 7 Oct 1836 Menallen Twnp, Adams, PA and died 22 Jun 1907.
The couple married in 1863 (according to the US Fed Census).
By 1869, the couple, Isaac and Rachel (Griest) Tyson had moved to Philadelphia.  Meanwhile his brother was in and out of the photography business with Tipton (that's another story).  Both Charles and Isaac found out there was more money to be made in photography than just taking people's portraits: they had been trained on the battlefield at Gettysburg.

I know this through the certificate of removal that Isaac and Rachel moved their membership in the Warrington-Menallen Meeting to Byberry Friends' Meeting (rocf-see below:)

2 rocf - received on certificate from- A certificate of membership was received from another monthly meeting. Byberry MM - Religious Society of Friends (Quakers) (abingtonquarter.org)

Why did he move? Perhaps because his parents and sisters lived in Philadelphia.

But mostly, the city was a good deal larger than Gettysburg. Isaac continued his photography business in Philadelphia.

He even persuaded his brother Charles (who had originally been his teacher) to sit for him.
Isaac made photographs of nearly everything. 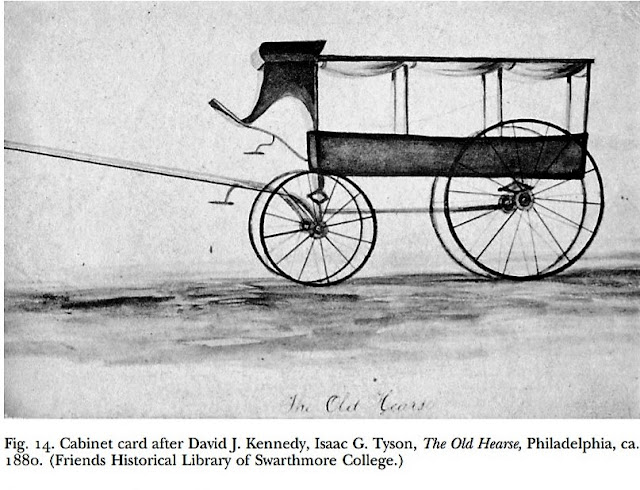 Children of Charles Barclay Tyson and Marion Baker (and grandchildren of Isaac and Rachel Ann):
`Eleanor R Tyson
`Clarence Burtis Tyson
`Anna Gertrude Tyson
`Charles M Tyson
*thanks to a reader for noting an error in this post and helping me right it!*
Sources:

4 Photo of Cabinet Card from book.

5 Photo of Charles J Tyson; my own collection ACHiggins-Johnson

6 Other information is a combination of 1)  MB Walmer's Collection (original copies, digitized) and 2) records from Ancestry.com

Posted by PastRemains at 03 December