Who Are These Comlys Anyway?
My family has written plenty about the Tysons Quakers and the first two posts here were devoted to Charles J Tyson.
This post will answer two three questions: who are the Comlys,  how do they relate to the Tysons, and who was the first Comly ancestor in North America? Enter Old Broadbrim, Quaker Detective (I just need a sidekick). 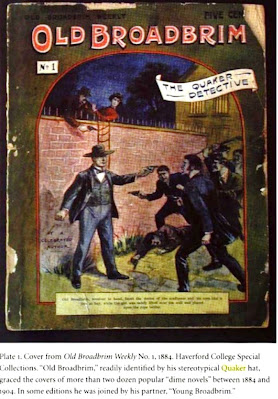 The Comlys were English Friends [Quakers] before arriving in the colonies, and were some of the earliest English Quaker settlers of Philadelphia.
My ancestor, my 8th great grandfather, Henry Comly arrived in Philadelphia with his wife and son-also Henry-in November of 1683, only a few weeks after the first Tyson from Germany arrived in October (though the date is debatable).
While the Tyson family resided in Germantown, Henry Comly had large tract of land in Byberry, Philadelphia. As you will read later, he had 500 acres but sold part of it soon after arriving.
"Henry Comly purchased a tract of 500 acres in the west corner of Warminster township, a portion of it still remains in the family.
We have no evidence that he ever lived there, but his son Robert did, and had a large family. Robert Comly's son Robert, married and had a large family.
All that bear the name of Comly in and around Horsham are his descendants."
Source: Friends' intelligencer, 1884

Fan Chart of the Comly Line
Have you seen those fan charts?
Here is part of one filled out several years ago by a relative.
I’m only using (here) portions of it which are relevant to the Comlys. To make it easier to follow, I placed a red box over the Comly line.
You can see that the fan chart has been corrected and is often difficult to read.
The first piece here would begin with my great grandfather’s father: 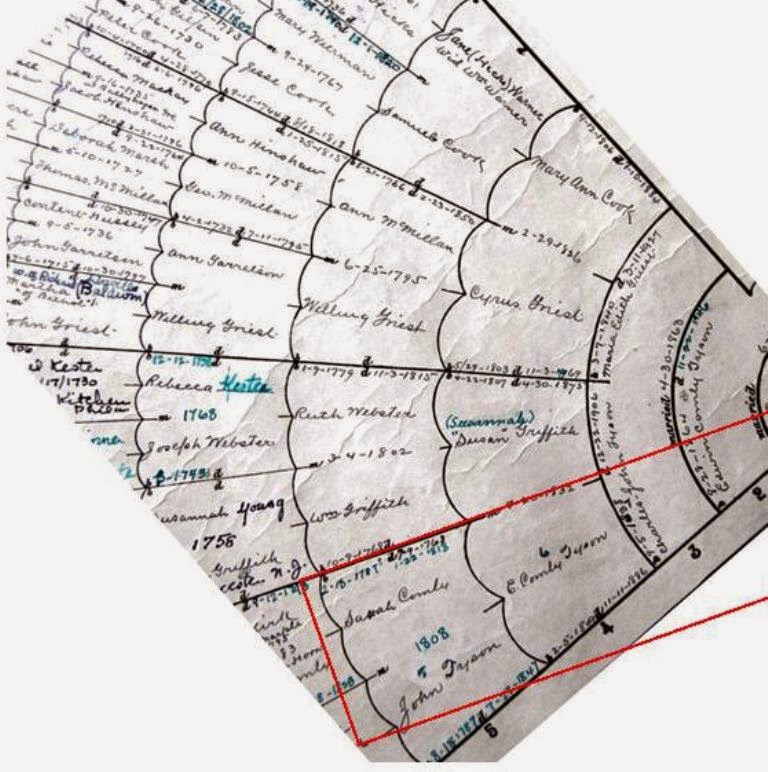 The second piece contains some overlap and goes back a couple generations. 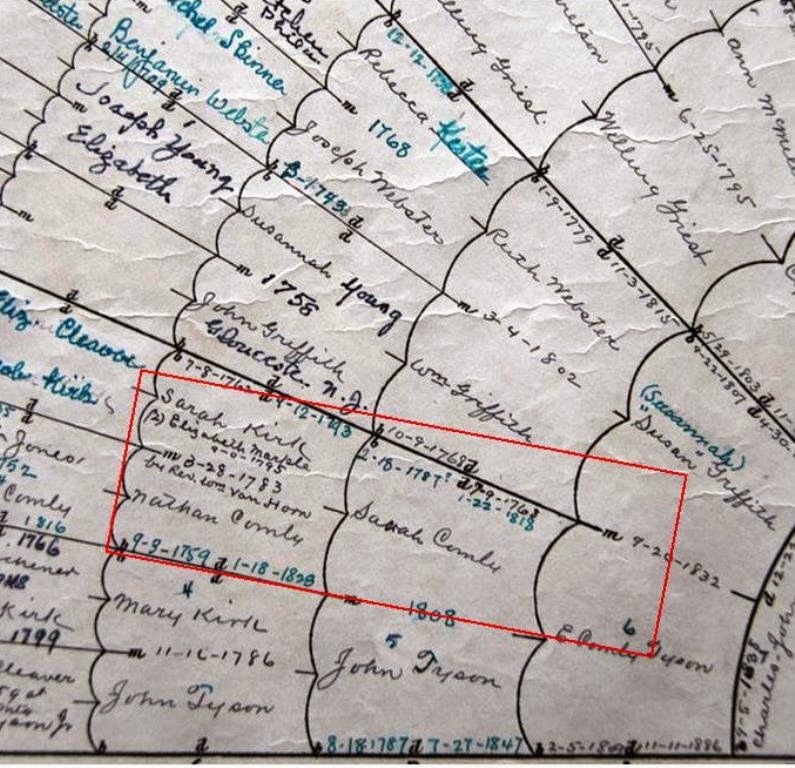 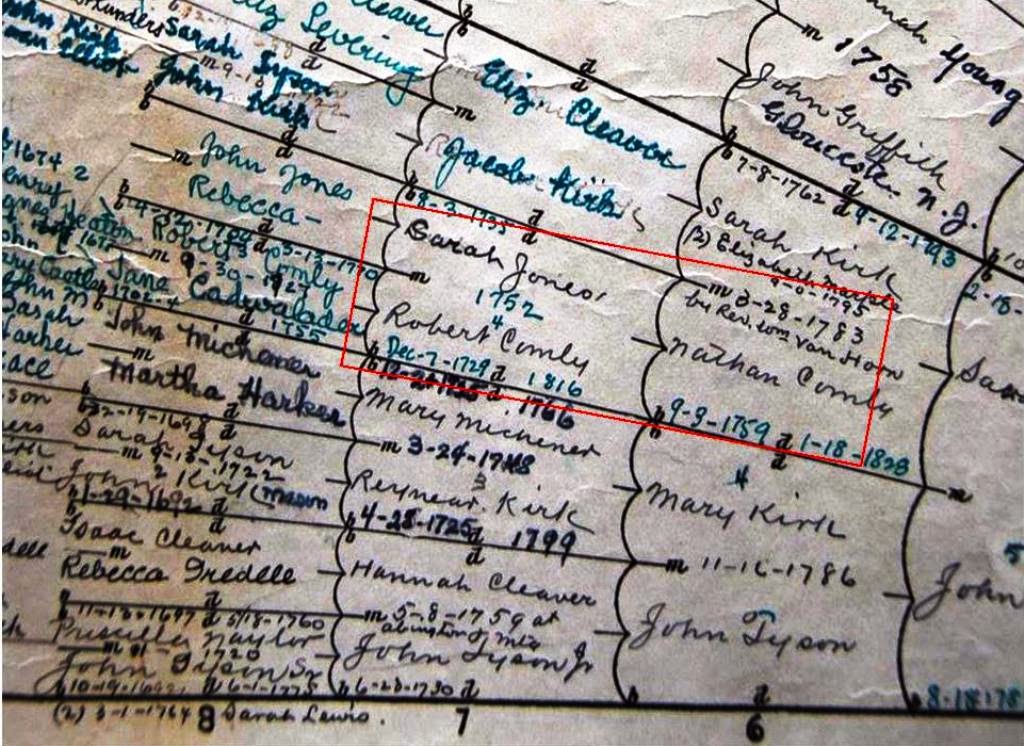 The fourth and final piece is really difficult to make out:. 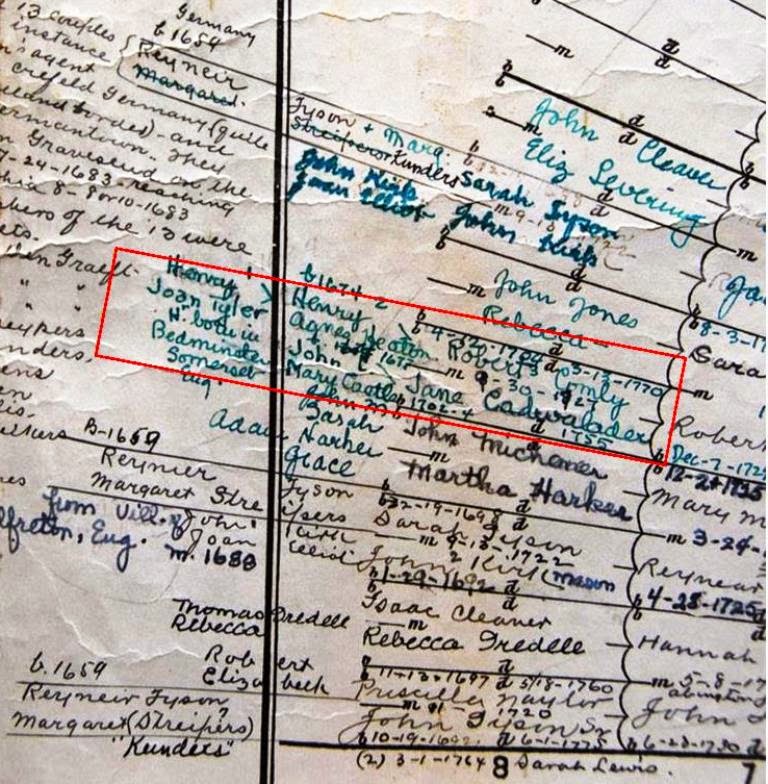 Difficult to read? You bet! Comprehensive, yes.
An Easy-to-read Comly Lineage
For the purposes of this post only, I made my own simple chart showing the Comly family and how they are connected to my maternal grandmother (whose maiden name was Tyson). I also color-coded it:
yellow = Comly and green= Tyson To keep it compact I have only a couple Tysons. 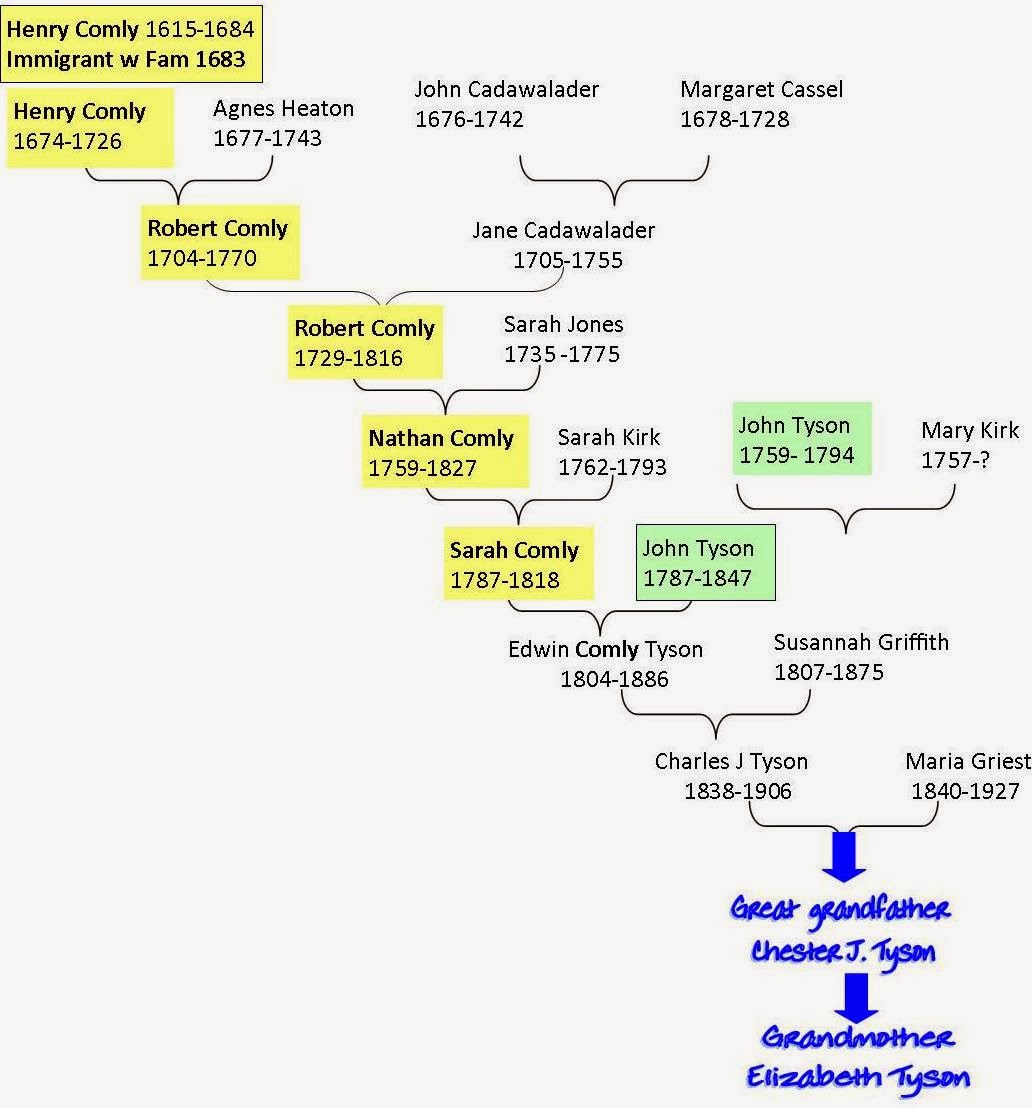 Who was Henry Comly?
Vitals: Henry was born not far from Bristol in Somersetshire, England.
I've not yet got a certain birth date for him (if it is 1615, he was old when he took passage). Henry Comly (Sr) died in 1684, a year after he arrived in Pennsylvania.
Many of the records I've found for Henry Comly confuse the father with the son (perhaps they don't realize there was a father of the same name).

Occupation:
Henry was a weaver in the town of Bedminster, Somersetshire, near Bristol, England.
Marriage: "Henry of Bedminster to Joan Tylor of Bristol." It was quite possibly Henry's second marriage.

Across the pond:
Henry was a Friend [Quaker] prior to crossing the Atlantic with his family. At some point early on, he bought a tract of land from William Penn.
I note this as there were many early Quakers who were converts in the colonies. At that time Quakers had preachers who traveled around the country (and the world).
In Pennsylvania, and in parts of the Northeast, many dissenters (nonconformists) converted to Quakerism.

Henry Comly settled on a tract of of land (about 300 acres) in Warminster Township, Buck Co. PA., about seven miles south of the present town of Doylestown.
This was part of a grant of a total of 500 acres purchased of William Penn before Henry left England.

Reed's map of Philadelphia, and the "Liberties" (printed with a quarto pamphlet in 1774) both mention "Henry Comly, of the city of Bristol, weaver," in the list of original purchaser of land of William Penn, date of purchase being July 19, 1681.

Many of those who purchased in England land grants of William Penn came over with no definite idea where their tract of land would be.  Henry Comly was one of the latter [purchased before his arrival] as early records show.

Part of the land he owned was 200 acres in Philadelphia County,  which he sold soon after arriving.
I am guessing he wished to 1) consolidate his land and 2) he likely needed many goods and cash after having just moved to the new world.

In his will Henry left to his son, Henry [my 7th great grandfather] "two hundred acres of land bought by me of the Governour besides the House and Hundred which I now live in."
Here is an old photo from a book of Byberry Meeting House (which was not there when he lived there).


﻿Henry Comly’s Will:
Know all men by these presents that I, Henry Comeley, being weake of Bodey but of prefect memorey doe make This my last Will and Testament.
First I give and Bequeath unto my wife Joane Comly the Third part of all my Personall Estate both Goods and Chatels.
Item. I Bequeath unto my dauter Marey the Quantity of one haundred Acers of uncultivated land or the value thereof.
Item. I bequeath unto my sone Henery ye Remaining two thirds of my Goods and Chatels and perticulerly one fither bed and Appurtinances thereunto belonging, together with Two hundred Acres of Land bought by me of the Governer besides the house and house and hundred Acers which I now live in. Lastly I nominate and appoint my friends Edmond Benet, David Davis and William Paxstone to be my sole Executors, to supervise this my last will and to overse my sd Son unto whose care I Commit him and the most fit time for him to reseve his sd portion (with the advice of friends of the Monthly Meeting) but if my Son dye before he be of Discresion to reseve his portion that it dissend to my sd dauter Marey exepting the house and lands I now live in to my wife during the terme of her naturall life.
In Wittness whereof I have hereunto set my hand
and Seale this the 26 day of 2d Mo. 1684.
Sealed and Delivered in ye Presence
of Henry Comly his mark