Abraham Brinker of Butler Co, “Pioneer”
My grandfather (Charles Tilton) said once he'd gone to college "far from Butler" intentionally.  He made some reference to being too much a part of Butler. I looked closely at his ancestors who were born or had settled in Butler County, had to agree that his roots were very deep in Butler County.
The yellow boxes in the tree below indicate Butler people. 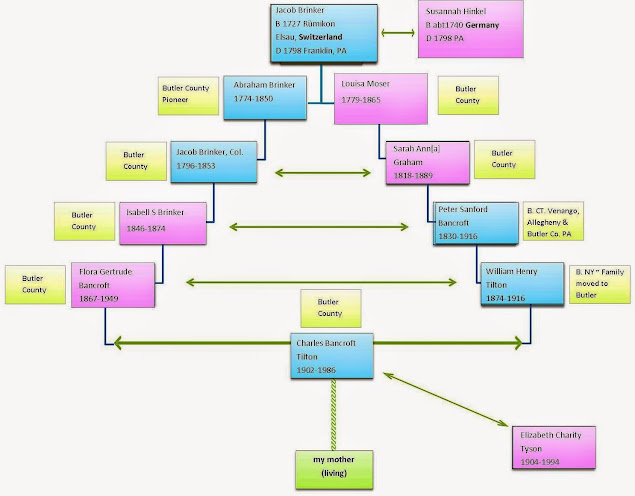 My grandfather's great-great grandfather, Abraham Brinker was born in 1774 in Easton, Northampton County (Bethlehem, Nazareth (partly in Lehigh County) PA and was the son Jacob Brinker and Susannah Hinkel (of another post) .
The Brinker family had moved to western PA to Franklin Twp, Westmoreland County (Denmark Manor,  SE of Pittsburgh).  In 1800 Abraham was 26 years old.
Researching this early "pioneer of Butler," I found probably too much (can it be?) on Abraham Butler. My earliest search rendered an old history of Butler from 1883 (but the 1895 history of Butler is more thorough).

The (better) 1895 History of Butler County contains this  biographical sketch of Abraham Brinker:

CAPT. ABRAHAM BRINKER was one of the pioneer tavern keepers of Butler, where he erected a log building on the site of the Citizen office in 1804. He was a native of Northampton county, Pennsylvania, whence he removed to Westmoreland county, and later to Butler. He carried on the Mansion House until 1809, and then sold out to Jacob Mechling, who conducted this well remembered hostelry for many years.

1804
At the age of 30 in 1804, he'd moved to the newly formed town of Butler, and he built a log house south of the site of the court house, in which he kept tavern called The Mansion House for a number of years.

Abraham and others also paid $20.00 each for Lots #150 & 151 to be use for a cemetery.
(However Abraham and others are in the Brinker Cemetery on Bonnie Brook Rd. off Hwy 422
in Butler Co., PA.).
Abraham build the fourth cabin in the new town of Butler.

The Mansion House  - Public House
“The Mansion House, which was erected by Abraham BRINKER soon after the town was laid out.
It was a log building, stood on the side of the Citizen and Record offices, and was a noted landmark for many years. He was granted his first license in 1805.

Mr. BRINKER kept the Mansion House until 1809, then sold it to Jacob Mechling, and removed to a farm on Bonny Brook, where he erected a grist-mill and carding-mill. “

As mentioned above, Abraham sold The Mansion House in 1809 to Jacob Mechling.  Abraham was  35 years old when he did this, he moved out of town a bit.

Mills and Farm
Abraham was "an extremely industrial man and within a year built a built a carding mill, saw mill and distillery, and in 1814 erected a stone grist mill. He kept a large farm."
He was described as “one of the most prominent and enterprising men of his time.”

Brinker's Mills = Bonny Brook
A few years after Brinker moved from Butler into Summit Township a post office was established and at some point Bonny Brook post office became known as Brinker's Mills. "The name of this small community went back and forth an untold number of times."

Erects a School
The children of the pioneers of Summit township attended, in 1813, at a log school-house near Brinker’s mill. Then eventually the school had a frame building which Brinker, the Gilliands and Martins erected, about 1818.


War of 1812
(from The History of Butler County:)
"At the City of Erie, a peninsula, over six miles in length, arches out into the water of Lake Erie forming an expansive natural harbor.

French explorers recognized the intrinsic value of the harbor and in 1753 constructed Fort Presque Isle on the mainland near the harbor entrance. The name Presque Isle means “almost an island” in French and referred to the nearby peninsula.

Fort Presque Isle and its portage was became a vital link between the French fur trade network in the Great Lakes and its colony on the Gulf Coast.

Control of the Presque Isle region was wrested from the French in 1760 during the French and Indian War, and following the Revolution, the area was incorporated into the State of Pennsylvania in 1792.

During the War of 1812, the harbor at Presque Isle was used to construct six warships, including the Brig Niagara, which played a role in Admiral Perry’s convincing victory over the British in the historic Battle of Lake Erie.

The first lighthouse at Erie, and indeed the first American lighthouse on the Great Lakes, was constructed on a mainland bluff in 1818, not far from the site of Fort Presque Isle.

On July 19, 1818, the appearance of the British fleet off Presque Isle, evinced a determination on the part of the enemy to not only compass the destruction of the half-finished American fleet, but to invade the State itself.
Commodore Perry, appreciating the gravity of the situation and the necessity for prompt resistance, sent a courier to General Mead, of Meadville, asking for reinforcements.
The next day, General Mead sent the following circular into every settlement within the Sixteenth Militia district:
CITIZENS TO ARMS
Your State is invaded. The enemy has arrived at Erie, threatening to destroy our navy and the town. His course, hitherto marked with rapine and fire wherever he touched our shore, must be arrested. The cries of infants and women, of the aged and infirm, the devoted victims of the enemy and his savage allies, call on you for defense and protection.
Your home, your property, your all, require you to march immediately to the course of action. Arms and ammunition will be furnished to those who have none, at the place of rendezvous near to Erie, and every exertion will be made for your subsistence and accommodations. Your service to be useful must be rendered immediately. The delay of an hour may be fatal to your country, in securing the enemy in his plunder and favoring his escape.

Sir:- I beg leave to express to you the great obligation I consider myself under for the ready, prompt, and efficient service rendered by the militia under your command, in assisting us in getting the squadron over the bar at the mouth of the harbor, and request you will accept, Sir, the assurances that I shall always recollect with pleasure the alacrity with which you repaired, with your division, to the defense of public property at this place, on the prospect of an invasion. With great respect, I am, Sir,
Your obedient servant,
O.H. PERRY.
Maj. Gen. David MEAD,     Pennsylvania Militia, Erie

The 38 year old Abraham Brinker served as a Captain, commanding a company under Col. John Purviance at Erie in the War of 1812.

“Captain Brinker ...was noted for his polite manners and accommodating disposition.”

“THE TOWN INCORPORATED
Almost a decade and a half elapsed before inhabitants began to think of taking a step forward by aspiring to a corporate government….Butler was incorporated as a borough by an act entitled "An act to erect the town of Milton, in the county of Northumberland, and the town of Butler, in the county of Butler, into boroughs,"… passed February 26 [1817] of the same month.

The charter was issued May 2, 1817, by Governor Snyder….
Thus was the borough brought into corporate existence…. The first vote recorded by the borough of Butler for State and county officers was that of October14, 1817.
LISTS OFFICES, CANDIDATES AND RESULTS, including:
Francis Fryer twelve, Abraham BRINKER fourteen, David Dougal eight, and Moses Hanlen three, for county commissioners;”

Abraham Brinker had already served once before as County Commissioner in 1806.
As a Justice of the Peace, Abraham settled differences, per this example:

Amicable action and on hearing the parties Judgment in favor of Plff's for seventeen dollars and eighteen cents--
Credit as per Clark MCPHERRINS Recd for $6--Feb 12--1830.
Feb 12th 1830 Sci Fa issued to James GLENN, 28th Aug 1830 to appear 3d Sept 1830--Then continued to the 27th inst--Def't met as summoned. James MCCURDY sworn on part of Plff, and after hearing the proofs I continued this case to the 11th day of Dec next under my own Judgment.
Dec 11th 1830 Judgt in favor of Deft James MARTIN for forty-two cents.
Dec 3d 1830 the Pl'ff appeals to the Court of Common Pleas of Butler County.
I certify the foregoing to be a true transcript of a Judgment rendered by me from which the plaintiffs have appealed.
Witness my hand and seal this 29th Dec 1830.
ABM BRINKER [Seal].
It is deemed of sufficient interest to let it be seen how important (?) much of the litigation is upon which professional men are required to spend the knowledge they have acquired at a cost of time, money and mental exertion. Here was a case originating in a small indebtedness of $11. The defendant alleged he had paid it in the lifetime of the original creditor. The executors refused to believe this, and had a Sci Fa issued to revive this judgment. After a lengthy deliberation, the Squire gives judgment for defendant for 42 cents. From this the plaintiffs appeal; it is finally referred to arbitrators, and they, after giving it their best attention, render an award for defendant for 77 cents.

One history wrote of him:
"He was public-­spirited and generous, encouraged and supported schools and his influence was exerted for the good of the community and individual people.
He had sound judgment. Very often when any dispute arose among his neighbors they would say, "Let us leave the matter to Squire Brinker."
Many problems were settled quietly and to the satisfaction of all interested parties without the law in this manner.

There being no public houses near, his house and Squire McCurdy's, often gave entertainment to travelers on the pike.
Squire McCurdy was a religious man and his home was often visited by ministers, who came to preach at the schoolhouse.
As his house stood on one side of the creek and Mr. Brinker's on the other, it became a common saying among the settlers that Bonny Brook had the law on one side and the Gospel on the other."
Death and Burial:
Abraham predeceased his wife, dying at his home in Summit Township in 1850 and was buried in Bonny Brook cemetery.

The Mosers were one of the first settlers of the area. I believe the confusion with Lousia/Eliza Brinkers stemmed from the 1883 History, and was correct in the 1895 History. However, that there were so many Brinkers, and that Louisa Brinker and Abraham had a daughter Eliza, and a daughter Louisa does add to the confusion.
I am 99.9% certain Abraham's wife was Lousia Moser, not Eliza.

There has been a small amount of confusion over whether there was an Abraham Brinker Jr. I think there was:
A portion of Summit Township later became Clearfield Township.

Posted by PastRemains at 18 October