My children don't recall my grandfather (he died in 1986). However, they might recall my grandmother Elizabeth Tyson from her visits to her daughter's house late in life. Babies and old people nap a lot. So, my children probably recall her napping:
By then she'd raised her children-and grandchildren, I'd say deserved a good rest!

A few years ago, my mother (& her daughter) shared a few memories from her youth in the Tilton family. Ann's memories form this post. Read below for the Guest Blogger's memories:

My mother, Elizabeth Charity Tyson, was born in August 23, 1904, and her husband Charles Bancroft Tilton was born October 12, 1902.

When I was young, my mother worked for a while at the Kraeger Furniture Company in Jenkintown, PA. My father Charles worked for a small landscaping firm where he was the designer/salesman. This was a similar job to the one he had prior in Tarrytown, NY, after they were first wed.  For a time both Pat Moore and Flora (Bancroft Tilton), Charles' mother and stepfather, lived with my family (Pat died in the early 1930s, Flora in 1949).

[My father's field of study at State College (Pennsylvania) was in dairy (animal husbandry). He liked landscape design, but chose dairy as a major. He wanted to go to college out of his home area of Butler/Pittsburgh, and State College offered him a scholarship if he chose this as a major. He didn’t mind it, as he said it offered him the most latitude with regards to choice of courses: he could select more "academic" courses (such as literature) while finishing his major field.]

After Pat Moore died,  my grandmother,"Nana," continued living with us until she died in the late 1940s. I think they had lived with my parents most of their married life. Pat Moore had lost his business in the 1920s before the Crash of 1929.

The living room set of furniture that my mother took to Naples, Italy (during Charles' time with Air Force/NATO in the post-war reconstruction of Europe) was the same furniture she eventually  gave to my sister Margaret (“Mardy” Tilton Walmer). The living room set was from Kraegers where she had worked.
It was rumored to have cost $10,000 and that was in the 1930s, but it may not be true.
Our family moved from the double house at 102 Walnut Street, Philadelphia (where we rarely talked to the people in the other side, is it possible they thought the two Tilton girls were too noisy?) to a Dutch Colonial style house on 427 Hillside Rd in Philadelphia, on the other side of town.  I loved that house. It was on a nice corner lot. 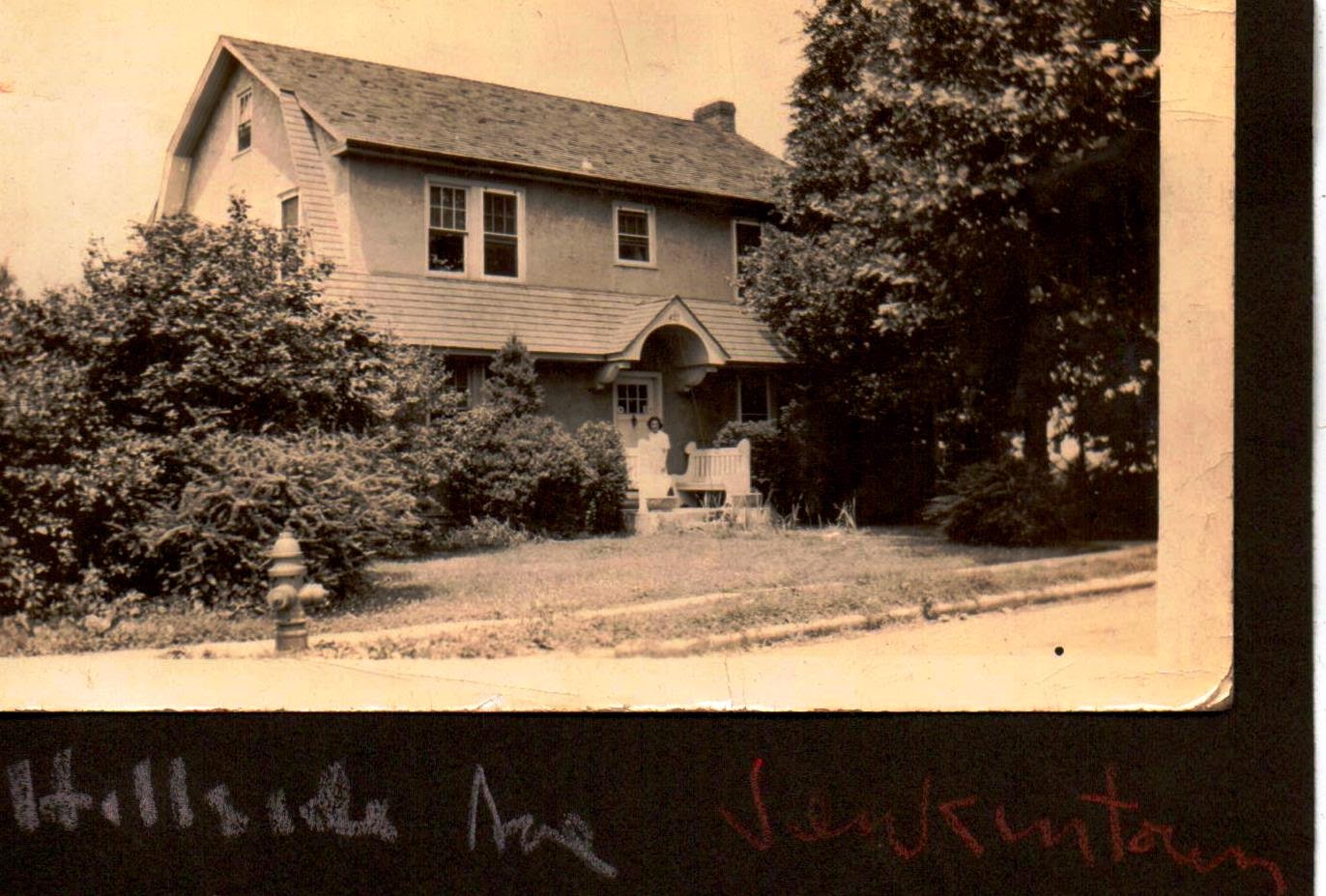 During  World War 2 one of my mother's brothers, Alan Tyson, planted a Victory Garden in back, (but without beets which he hated).

Alan and (another brother) Norman lived with Tiltons at different  times. I recall that Alan  lived in the basement, rather roughing it. He was pretty messy but we didn't mind.
We also took in roomers or boarders, but one at a time since there was only one spare room.

Mardy was friends with a girl named English, who was a wild daughter of divorced and wealthy parents. She did very exacting micro-work in a defense plant.

The Tilton girls had adventures with her. She got Mardy to go with her to a bar and go in (or look in) in order to see if this girl’s boyfriend was there.  And, she took me to her family's estate where we swam in the in-ground pool on the spacious grounds.
Our brother Bill was born when we were older -- about 9 years old.

With World War 2, there were no young men who could do the landscape work and the clients, wealthy families on the Main Line of Philadelphia, weren't putting money into landscaping.

The firm could no longer employ my father. And, the other work was in sales, which wasn’t his forte. He realized he needed a different job--and more money.

He went to a going away party for a friend in Gettysburg, and later saw an ad for the Air Corps. Later the name was changed to the US Air Force.

He enlisted and after batteries of tests, and because of his past profession (in landscaping), he was given a job in intelligence.

He had been ROTC at Penn State (State College) and so was automatically a 2nd Lt. His specialty was photo intelligence as it required the ability to look at and interpret arial photos. He first went to Florida for training and lived in the Roney Plaza. He was also in Idaho and other places for training.  He was sent to England during the war and worked on intelligence there, mostly on bombing.


During that time, our family stuck around the Jenkintown/Philadelphia area and carried on for awhile, but it was getting tough and so my mother picked up stakes and moved back to her home area in Adams County, PA. Whenever my father came through Pennsylvania (if he was in transit), we'd try to meet up with him if he couldn't get home-leave.

The family (mother, me, Mardy, Nana and Bill) first lived above Ditzler's Restaurant in Biglerville, on the top floor.  Nana--Flora Bancroft--(Charles' twice-widowed mother) lived with the Tiltons and would flush dead rats and mice down the toilet.


Eventually, the Hill House (ancestral Tyson home) in Flora Dale, PA (across from Menallen Meeting House) became home till Mardy and I left for college.

Posted by PastRemains at 01 July