This will be a different kind of post: I'm going to tell a story through photos.
Some of my grandmother's (Catherine Barnwell) children and her husband Jack (Victor) Higgins are covered in other posts on this blog.

I visited my grandmother Catherine (Kitty) every week, so I felt like doing something a bit different. This will be a picture story about everyday objects that evoke memories of her.
Of her family, the Barnwells, I have only a bit of reliable information on her parents and siblings.
Her vitals and family information are in the chart below. BUT SCROLL DOWN to the vintage photos :)  Catherine was known as Kitty or Kate.

Before Jack and Kitty moved up to Sullivan County in the 1930s Jack was first sent to work in the Dannemora prison there and Kitty followed.
Kitty found the long winter in this northern county too much for her (Clinton County is the furthest north and easterly state in NY, bordering Canada).

She would tell a story of her getting a new Easter outfit in Dannemora, probably a dress with matching hat, likely new shoes or at least new stockings.
Easter Sunday morning came and she arose eager to dress in her new outfit only to find they’d become snowbound by a blizzard overnight (normal weather for Easter in northern NY).

As she told it, she decided then to pack and to return to NYC: which she announced to Jack.
That they moved to Sullivan County and not Clinton was all we need to know about the conclusion of the story.

However, having a big family meant she was always either working, working at home, or taking a break from working.  Vacations were trips to see her sisters in New York now and then. I don’t recall her being in clubs or outside activities.

I don’t have any photos from her youth.  Here she is in a family photo taken in Neversink about 1942. She had very white skin, dark brown eyes, and dark brown, nearly black hair.

I think Kitty liked glamor, or at least, “the glamor of glamor.” Here are a few objects which I always associate with her.

I A wall plaque on her kitchen wall
I don't know who gave this to her or when, but it is certainly "vintage" by now. It's a simple varnished wood plaque, on which is painted  a woman in a mink stole, a man in a top hat, and what seems to be the NYC skyline in the background with this saying:

II Ponds Cold Cream
Kitty was one of the millions of people who used this. She'd remove makeup with it, so she often smelled of Ponds. She comes to mind whenever I catch a whiff of this still used this product.
I found a Ponds Poster on line from the 1920s which she might have seen: 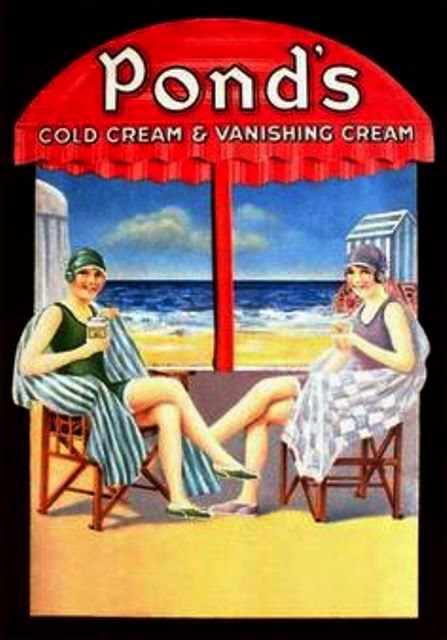 Here is an older version of the Pond's Cold Cream--I think the ones I recall were a different color label, same jar, same contents. 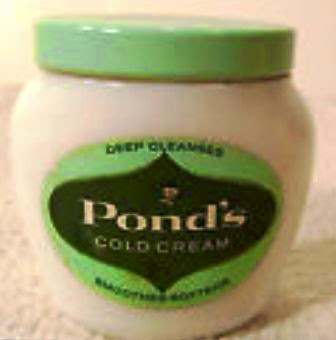 III Dresses
I think Kate knew how to dress with style, though never had much money to spend on it.
She seemed to select which suited her figure and height (she might not have been barely 5’2’’).
These styles were probably reflect how she dressed-or wanted to-in each period. (I’m pretty sure she shied away from browns in the 50s--she wasn’t a “brown” personality at all.)
Notice the "peplum" feature has gained a foothold in the 1930s.
The peplum feature remains--and the "sweetheart" necklace has been added by the 40s.
Peplum feature remains but dress lengthens.
Notice Kitty's dress is 2-piece, with a hat to match and a white purse (after all, it was spring).

IV Shoes
Kitty's feet were very small and she had a high instep and a high arch to her feet. She would often wear strap shoes with open toes, a bit of a wedge heel (but usually in canvas). 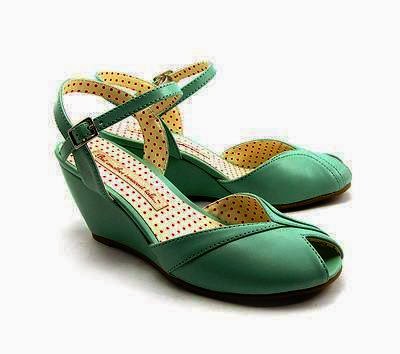 or a selection for summer: 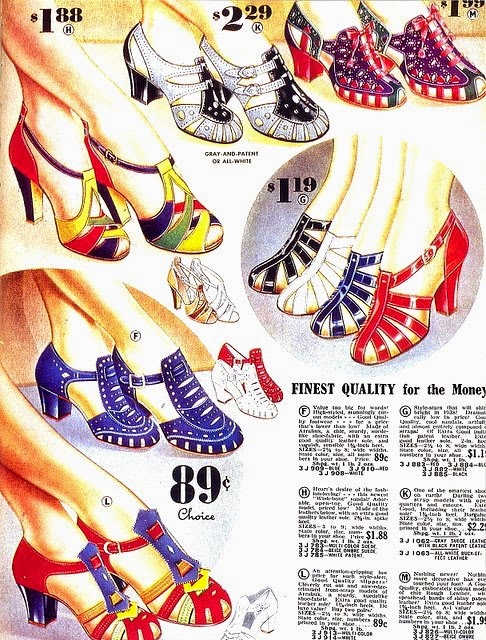 V Lipstick
Kitty liked red lipstick - at least that's what I recall. She looked good in it, too. Remember those "golden" tubes?
Did every manufacturer buy them from the same vendor?


VI Costume jewelry
Costume jewelry is my friend-and Kitty was in agreement with this. When I was old enough probably 9 and up, she would occasionally give me a handful of old costume jewelry. It was always stuff she was done with--and usually nothing I really wanted to keep but it was “new to me” and entertained me for an afternoon.

The brooches I recall were large  and loud.  I could never figure out when and why women would wear them.  Since they usually were in good repair, I guess Grandma couldn’t make them work for her, either. I’d pin them on at home but they pulled on the clothes and just looked odd on a cotton jumper, so they ended up lost to the ages.


VII Lucky Strike cigarettes
It was her brand, it's an old brand. Kitty may have tried Virginia Slims when they came out, but Luckys were her brand. (No, I don't smoke--and she advised against it. "I'm stupid! That's why I smoke!) She did quit late in life, however.
VIII Perfume (cologne)
Evening In Paris (which you can still buy). I think of this  as her trademark fragrance. But trademark fragrances can be overdone:
One year several of her grown children gave it to her for Christmas. Her tiny dressing table was afloat with Evening in Paris. That was probably the year she swore off of it too.

Posted by PastRemains at 23 June