#24 - Isaac Hicks of Hicks Nurseries And His Hobbies

Isaac Hicks of Hicks Nurseries
Isaac Hicks, the grandson of the more famous Isaac Hicks from a previous post. For the Hicks lineage leading to him, see another post. Isaac was my maternal great grandmother’s grandfather, or, my 3rd great grandfather.

If he had any notoriety, he began the "Hicks Nurseries" of Westbury, NY, the oldest family-owned business on Long Island.
The Swarthmore College Friends Collection on the Hicks’ has this to say:
“Isaac, son of John D Hicks and Mary/Sarah Rushmore Hicks (grandson of Isaac and Sarah Hicks), founded the Hicks Nursery in 1853. Active in the Westbury (Friends) Monthly Meeting and other Quaker organizations.”

Earning a Livelihood - Hicks Nurseries
Isaac began as a farmer but founded what became "Hicks Nurseries."  It's been said that he was entered fruit trees in the Queens County Fair and won a $10 prize and certificate for having the best twenty varieties of apples. I'm not sure if that's what led him to the business, but he obviously had a passion for trees.

The business was on Jericho Turnpike, west of Post Avenue.

"Hicks and Son" grew quickly: the Hicks family worked hard, and it helped that the surrounding population of Westbury swelled greatly. That there were many wealthy estates on Long Island gave them the opportunity to capitalize on their market.

Their son Edward enhanced the business when he struck on a method of moving and replanting large trees by the end of the 1800s.  Since then the family continued in the nursery business.  Some of the estates serviced by Hicks Nurseries include: the Morgan, the Vanderbilit, the Whitney and the Phipps (now Old Westbury Gardens) as well as planting trees on John D Rockefellers estate in Pocantico Hills. And, it is the oldest family-owned business on Long Island, but it is also one of the oldest family-owned businesses in the US, but it is the oldest one on Long Island.

When my aunt Margaret was researching Long Island family, she took her mother --my grandmother--Elizabeth Tilton (Bertha Hawxhurst's daughter) to Hicks Nurseries. On her maternal side, all of Elizabeth's  genealogical roots go back to Long Island to the 1600s.
Well, Elizabeth was tickled pink because she was treated her like a queen. As the founder's great granddaughter, the "family" part of "family-owned" business was still important.
More than a Livelihood--a Passion

It wasn't merely a business, I think Isaac Hicks was a devotee of trees. He wrote:


How does memory carry me back to those houses of Friends (Quakers), nestled near a piece of woods, showing a love of the beautiful and useful combined; and those noble trees that were of the primeval forest, when the country was settled…
There is something venerable and so conservative in these old trees around the meeting house that no lofty spire and no adornment of architecture can give. But all are not such.
Too many meeting houses stand out in bold relief, with no sheltering tree to beautify the lawn…But these trees, young men... will you not plant trees around your house of worship, and confer a lasting benefit to yourselves, meeting and the country?
....the time may come when you may enjoy their beauty and comfort of shade, and future generations bless the hands that planted the shade trees around your meeting house.

In Isaac’s poetic phrase the woods were “the beautiful and useful combined’ tells me he was  a businessman who did it for love of the product!

And Later, a "Weekend" Artist
I'm led to believe Isaac loved the outdoors. Collectors in my family had saved a few colored paintings of birds he made. Then someone scanned them-- and I have digital copies , The scanner scanned on the backs-"Red and White Warbler" is dated & initialed by Isaac, and the oriole painting is dated.

Isaac dabbled with painting when he was elderly and unoccupied with work. (Could this be where the artistic streak in my mother comes from?)
The color has faded in the warblers--but less so in the oriole below:  *note the date from the back* 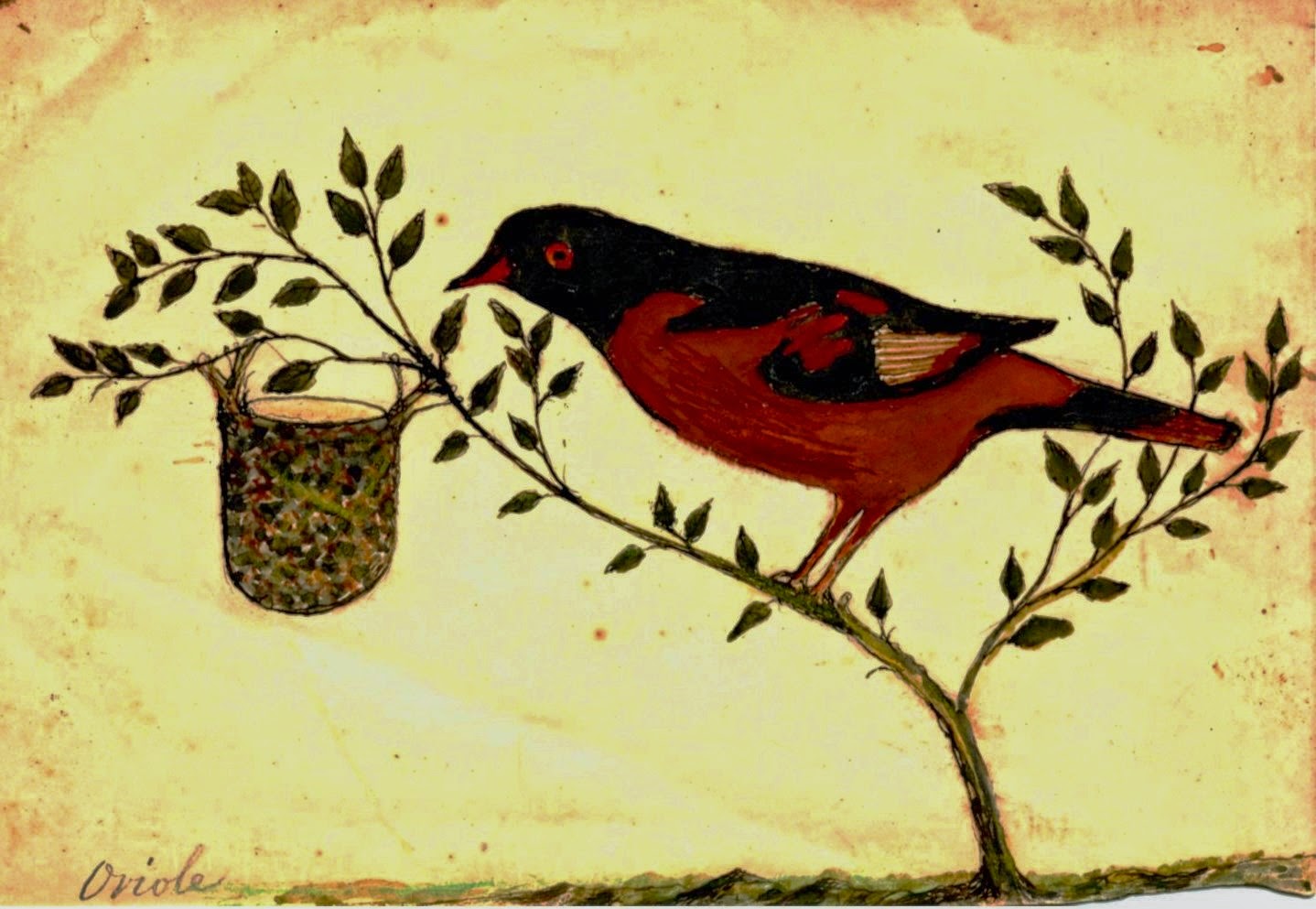 Now and then, I find a write-up on the Westbury area, such as this one-Click "Read More" to see it:


The Orchard Hill Designer Showhouse at Old Westbury Gardens is a showcase for America’s premiere design talent.  Approximately 20 top interior designers and decorative artists will transform Orchard Hill into a decorating masterpiece in the gracious traditional manner of the house itself.


Listed on the National Register of Historic Places, Old Westbury Gardens is the former country estate of John S. (Jay) Phipps. Westbury House, a magnificent, Charles II-style mansion, is surrounded by 200 acres of tree-lined walks, lakes, statuary, grand allées, and indescribably beautiful gardens. Jay’s daughter, Peggie Phipps Boegner, who grew up in Westbury House and was the founder of Old Westbury Gardens, lived in the Orchard Hill home from 1930 until her passing in 2006. (ETC..)


About Orchard Hill
The name Hicks is very much entwined with the history of Nassau County. Valentine Hicks, the man for whom Hicksville, NY was named, was the second president of the Long Island Railroad. From 1812 to 1850 he lived in a house that is now home to the Maine Maid Inn. Another family member, Isaac Hicks, founded Hicks Nursery in 1853.


Built in 1859 by John D. Hicks and his wife Caroline Haviland, Orchard Hill is the former home of John S. Phipps’ daughter, Peggie Phipps Boegner, who grew up in Westbury House.  Originally constructed in the Italianate style, the house featured an arcaded porch, round-headed windows, and a bay window on its front façade. In 1900, a wing was added to the house that now includes the living room and master bedroom suite. In the early 20th century, Mr. John S. Phipps purchased the Hicks’ house, moving it to its present location and re-named it Orchard Hill.  Upon her marriage, Peggie Phipps Boegner moved into the house which became her home until her death in 2006.   Mrs. Peggie Phipps Boegner was the founder of Old Westbury Gardens.  Orchard Hill, now part of Old Westbury Gardens, will be used to promote environmental activities for its visitors.

Posted by PastRemains at 26 July