A Few Children of the Higgins' - Long Past
These are siblings of my father. They died before their 30th birthday, so they barely got a chance to live. Only one left children.

"Kitty" seemed to have an ethereal beauty to her. I only saw her on a few occasions I had seen her, she seemed  quieter than the other girls of the house (or should I say, they were “rowdy”?) 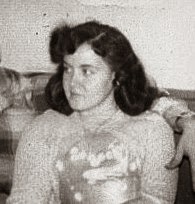 I'm not sure if at the time my grandmother was still working at the time as operator for “Ma” Bell (the telephone company). When she could get away from her daily duties of cooking, laundry, keeping all household moving along, she would get away as often as possible to see Kitty over in the Neversink area. (Grace, the youngest, was a senior in high school and some adult children still lived at home).

The day before she died, her mother had swung by Kitty and Eddie’s house. She spent the day helping Kitty clean out. It sounded like a spring cleaning type of job where they were getting rid of old things, and some deep cleaning.  My grandmother told us later that Kitty was thirsty Kitty that day. Grandma thought it must be because it was warm and they were working hard. She likely felt she should have noticed something was wrong with her daughter.

I was ten at the time--I was especially sorry for my cousins who were suddenly without their mother. I wished I were a grown-up who could drive there and play with them or do something. It dawned on me that the youngest wouldn’t even remember his mother.  I recall the funeral and the drive on Route 52 from Woodbourne to Liberty as she was buried in the Liberty Cemetery. We were all a mess at the cemetery. Nonetheless, I recall thinking what a nice thing it was that she had a grave perched atop a hill, despite being in a "city."

My grandparents felt the same way, apparently. I remember they took over making sure that the grandsons weren’t left out. They visited them, they dropped off Christmas and birthday gifts, and they talked about what else they could do for the boys.  One of the adult children in the family, Richie, did many kindnesses for the Ackerley boys. It wasn’t till I was older that it dawned on me that Kitty was his twin sister, so he felt an affinity for her boys as if they were his boys. I recall he often would buy gifts for them and transport them to their house for Christmas.

Thomas Higgins
Thomas Higgins (Tommy) was younger than my father, born in 1931 in New York. He had the same experience: moving from Harlem to the beautiful farmland of Sullivan County.
But Tom died in January 1943 in Woodbourne, NY. My father writes:

"He died at home, in my parent's bed before their eyes and mine. [The autopsy revealed] he died of liver failure…I suspect he caught the infection in our polluted swimming hole. The house sets right beside and was owned by a bungalow colony. The Neversink River makes a bend right there and formed a little bay.

Tommy until the year before had been a robust kid, built like my brother Joe. Our lack of prompt medical care partially influenced my father to organize our Blue Cross chapter as soon as it became possible.

He would have done anyway, but Tom's death gave him an extra push. He organized the chapter, kept the books collected the money, sent it to the central chapter. This wasn't a State program, the chapter was strictly local.

My father had a good mathematical mind. Both he and my mother graduated from Catholic grammar schools (8th grade), which was unusual for their time and class, Most people did not go to high school until around the time of WW II." (John Higgins Sr)

At any rate, he was my father’s closest sibling and it must have struck him hard. None of my 3 brothers were named after him. I suppose you don’t “replace” a person, nor improve on a memory.

In the family photo, he is a good deal smaller than my father. The next boy in the family, Joe-Joe (Joseph), was a good deal younger than Tom. Joe did name his eldest son after him.

As far as I know there were two infant deaths. In New York State a stillborn baby must be named (for the death certificate) and buried or cremated.

1928- Alice Higgins was the first child, and stillborn in New York. (My father was born the following year-had she lived, my father would not be the eldest).

After Alice, came my father. After my father, Tom was born in 1930.

1932- A third boy, Edward Higgins, was born two years after Tom, in 1932, but the umbilical cord was around his neck and so he didn’t live.

Posted by PastRemains at 26 May