#69 Flora Gertrude Bancroft's Timeline and Will

Flora G Bancroft Timeline and Will
I just found a will that my great grandmother wrote the year she died.

The will is short and reflects how much (or how little she possessed). Floras' life was circumscribed by difficulties and some personal tragedies. She lived through World War 1, the Great Depression and World War 2. Her own father had served in the Civil War. Her mother died when she was young. I am not sure where she was schooled still I'm sure her father was sure she had it. Like many people of the era she lived nearly her entire life with extended family. This post is a time line of her life events-connecting them to those people I believe she was closest to. After all, what affects our loved ones, affects us,

I believe it relevant information when writing a personal history. 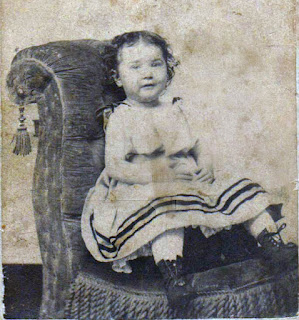 to the small city of Butler. Living in town meant she and her brothers were now close to her mother's family and their children (her cousins on the Brinker side).

I imagine she would have spent much time with the girls in the Brinker family.

With her Butler cousins

Flora filed for her marriage license giv­ing her first name as "Flo."

William Tilton was born in Brooklyn, NY. His family moved to Butler for a job. His parents moved from Butler to Detroit, then to California.

Her husband’s brother Clarence A Tilton had married and was divorced, living in Michigan. He subsequently married a divorcee writer Bertha Francis Parker (no children).

She was 32 when she had her first child Henry Addison Tilton, Butler, PA in 1900. The same year her brother's infant son, Sanford Bancroft died ( son of Earl Bancroft & Clara Ryan) died.

In 1902 her 2nd son (and only child who grew to adulthood, my grandfather) Charles Bancroft Tilton was born at 130 E Cunningham St, Butler, PA. She was 35 that year.

Less than a month later and a week before 48th birthday, her husband William H Tilton died on June 15, 1916. His obituary ran on Jun 16, 1916. The death certificate states the cause of death as throat cancer (with other cancers).

My grandfather was 14 years old the year she was made a widow.

She remarried a "Pat" (Alexander) Moore who promised to care for her financially. That didn't work out; as soon as her son Charles was out of college in 1926, he found the couple a small hut on the farm he was managing, they were in desperate straits.

Pat Moore died in 1935, by which time the couple was living with Charles, his wife and their children in Philadelphia. Flora continued to live with the family till the end of her life.

The Great Depression had forced my grandfather to take up jobs which were wholly unsuitable for him. He never made much money-enough to keep body and soul together. His wife did what she could to contribute. At the start of World War 2 began, her son found out he could become a commissioned officer, so he signed up. In the war he was with Air Force intelligence. When the war was over, he returned unscathed.

During the war, the family had moved out of Philadelphia to Elizabeth's family's hometown in northern Adams County, PA The eldest grandchildren went off to college and the 'baby' was still at home. When Charles returned from the war, he and Elizabeth set up a nursery business that was limping along.

In February of 1949, Flora was not yet 82. She made out her will in her own hand. I don't know why but since she died later that year, perhaps the doctor gave her some bad news? She turned 82 that June. The month following on July 6, 1949, she died in Gettysburg, PA. My grandfather was 47 years old. (The following year my mother got married to my father). She is buried at the Menallen Friends Meeting.

Her Will (son & wife & grandchildren, l don't know who Helen is)

My will or wish is that the little I have of worldly goods viz- the silver in chest & china Since they came from Charles grand­parents on his father's side. I wish Charles & his wife Elizabeth to have them so long as they both or one of them live. Charles may leave them as he wishes--only that Elizabeth has use of them for life. Then Billy--should have it(?) Flora Bancroft Tilton Moore

Posted by PastRemains at 25 May