As I write this, during the 2020 COVID-19 pandemic, people are thinking more seriously of going back to gardening--if only to have food handy and available. Eggs are scarce. We don't think about food much when the supply chain is robust and when we have jobs. But our ancestors always thought about it.
When I think of home I think of a garden. One of my earliest memories is walking with a neighbor house to 'get the cows home.' My parents had a large vegetable garden (which got bigger with time).

Each spring we'd make the trip to nearby town. First stop: the hardware store, an old fashioned style one--all wood and windows and narrow. Second stop: a wide-mouthed barn set back from the road, and whose wide front lot was overflowing with temporary tables of plants, flowers, seedlings and seeds and all sorts of stuff for my parents (and us). The fragrance was wondrous. The final stop was wonderful too: Banta's Mill, with its odor of fresh sawed lumber. 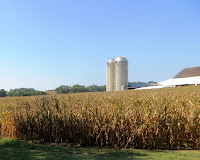 If you don't have a farm you could have a garden, a small plot, or a patio garden.  I was reminded of that when I heard of the newly established National Society Descendants of American Farmers. https://www.nsdoaf.com .

Nearly all my on my maternal side ancestors were farmers into the 20th century.
Though most of them remained near populated areas (cities) on the East Coast US, most were farmers or grew up on a farm.

I'll tell two "city boy" stories who had a lifelong love of gardens (but only as hobbyists).

Case One:
My father, John Victor Higgins (1929-2015). He was born and raised in Washington Heights (Harlem). He lived in a tiny apartment and his neighborhood was the typical assortment of poor immigrant Irish, Italian, Puerto Rican and the (non-immigrant) black families or individuals. My dad didn't speak much about his childhood (or I forgot).  But I remember this: his absolute astonishment  at encountering agricultural life.
He was born in 1929, year of the Great Stock Market Crash & the beginning of the Great Depression. An era when the middle class lost jobs, housing and were hungry. His parents were children of recent immigrants from Ireland. I do believe he spent his New York City years dreaming of food, I believe.

Then, when he was a youth, his family moved 100 miles away to Sullivan County, NY as his father had a job at a state prison. He recollected finishing a good & filling meal that first day they were there. I believe they were at a boarding house of someone who was to be a neighbor.
For dessert she served either berries or a cobbler with berries. Possibly seeing this boy scarf down food, the woman suggested he go outside and if he'd like more, he could find them on a bush. The light bulb went off in his head: I don't need to be hungry if it grows freely.

The impact of City vs Country made a huge impression. Later he'd tell of how he tailed  a local man and neighbor who was a subsistence farmer, Mr. Kortright.
And it made such an impression on him that we always had a garden.
~ He had career opportunities that had to be done in the city and he got his PhD, but something kept him close to the country. It was the land.
~When my parents sold their house after a flood & they moved 7 miles away, they cut down the hemlocks, and he tilled the (poor) soil and gardened even though he was in poor health.
~ January was a good month for mail for my father. He eagerly awaited the delivery of catalogs whose pictures promised him gigantic tomatoes, delicious corn and beans.  He had those catalogs well into the summer--just to look at the photos, I think. :)
Farming was a matter of life and death, of health and illness, of good economic management and poor management. He was a farm convert.

Case Two:
My mother's father was born and raised in Butler PA. Charles Tilton's father was a clerk, his mother raised him. He was good in studies but he had no money. He called his family, the "genteel poor." For reasons I don't know he decided his love was in horticulture/horticultural design before college. He liked being outside (his father William Henry Tilton was an avid hunter and fisher) but liked working with plants.
He attended State College but majored in management of dairy farms. Why not horticulture? Because they offered him a full scholarship in dairy management.

After college for a short time he managed a dairy farm in Pennsylvania. Then he got a job in Tarrytown, NY at a nursery. This was more his style. He was there for less than two years and moved to another nursery outside of Philadelphia, in Jenkintown. Things were going well, as they tended the 'main line' in Philadelphia.

Then, again, the Great Depression hit.  And he, and millions of others were out of work. He spent most of the Depression--my mother's youth-working as a salesman (not his love) but not making money. Desperate after the beginning of World War 2, he finally joined as an officer. He needed money.

At this point his wife, Elizabeth (Tyson) moved with the three children and his widowed mother back home in Adams County PA (n of Gettysbury). The Tyson family had a large apple orchard business. Elizabeth as well as my mother and her sister helped out with the orchards from time to time. And they always had a garden. My mother tells me of the delicious tomatoes they grew.

Once Charles was shipped back to the US,  he and Elizabeth worked hard at establishing their own nursery business.
But it was too early--the country was still suffering in a post-war recession. And they were located in Adams County where there were too few clients to make it work.
Then the Air Force invited him to participate in NATO and the rebuilding of Europe (after WW2), so he left his failing business and rejoined.
He was shipped off to Germany and then Italy in the 1950s, ending his career at the Pentagon in the 1960s.
While he hated the work and the pace of life in DC, he thoroughly enjoyed his own garden in Virginia.

--
I briefly refer to Elizabeth's family in Pennsylvania. Her maternal ancestors on Long Island were also farmers. Her maternal grandmother, Marianna Hicks, was the descendant of Isaac Hicks. Who started a nursery on Long Island which today (2020) is still owned by a descendant of one of her brothers.
More about the Hicks Nursery here (Stephen Hicks the  Hicks Nursery President is a direct descendant, my distant relative)


Posted by PastRemains at 11 April