#63: Always nearly Forgotten: the women. Copes connects us to Virginia

A Surprising Connection
Who do you always forget when you do genealogy? the women, generally.
Partly because I spend my time in the productive and record-heavy areas. For that reason, we often forget about the women’s lineage. Bad-bad-bad. Sometimes I research it because if someone else has done the heavy lifting, I can move on to the record-heavy lines (her father, or father’s father).

I dug deeper into my MOTHER’s father’s grandfather’s line. The family name I was looking at was Louisa A Copes. Copes, not Cope.  In my research, stayed to the Copes line and found precious few (though there were many a Cope!)
Louisa Copes’ father, John Henry Copes died 18 January 1860. His wife was Isabella Sarah Catherine Egbert (B. Staten Island, 14 Mar 1822 Died, 1862). 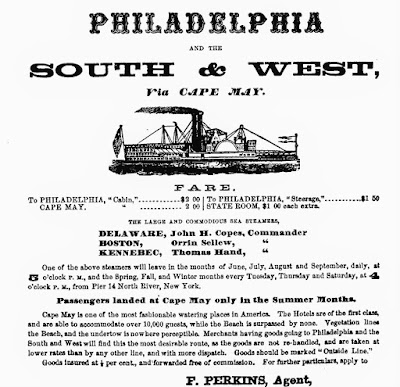 JH Copes’ Copes’ birthplace was a mystery for years. Then I found his obituary and some old advertisements which helped. I began to suspect that “Captain” John Henry Copes was not local to New York, and that he was a “captain” and a “mariner”  At the time of his death he was captain of a dayliner (daytime excursions around the NYC area). Could it be he grew up somewhere else, along the coast?
Surprise:
I found a John Henry Copes in Virginia. Not where I expected him to be from! There was a Copes family  on the Eastern Shore of Accomack County of Virginia, and were seaman.
~John Custis Copes had a son John Henry Copes, both mariners, small enterprises on the Eastern shore (of the Chesapeake Bay).
(If you don’t already know, the Chesapeake Bay is huge. The Chemung and Delaware Rivers in New York are the upper reaches of the bay, and they both contribute to it. The bay is so big, the “Eastern Shore” of the bay was carved up by 3 states (Delaware, Maryland, Viriginia or “DelMarVA”). The bay starts up in PA, but doesn’t open into the ocean till you are in the southernmost part of VA, near Newport News & Williamsburg.
I believe John Henry Copes made his way (I’m guessing by ship naturally) northward and then remained on Staten Island. Note in the ad pictured, it was a Philadelphia area ship.
There is evidence that his father’s land (John Custis Copes) was on a tiny island in the middle of the bay which is almost all covered over by water now.
Custis?
I was piqued by his father (John Custis Copes’) lineage, as genealogists know middle names such as “Bancroft” were likely once surnames. Any “Custis” coming out of Virginia reminded me of Martha Washington’s first husband: he was a Custis.
Indeed, John Curtis Copes was the son of Hancock Copes and Elizabeth Custis. So, I followed Elizabeth Custis’ line. Yes it seems that my lineage, and that of Daniel Parke Custis (Martha Dandridge Washington’s 1st husband) had a common ancestor named Custis. I'll leave it at that, it's  close enough to answer the question.

John Custis Copes' father, Hancock Copes (b 1765), was the son of Thomas Copes (3rd) b. 1735 born in Accomack County, VA and Susanna.
Thomas was the son of Thomas Copes (2nd) (B. bef 1706-1742) and Comfort Dix.
And Thomas (2nd) was the son of Thomas Copes (1st) of Northampton County, VA (b 1661 d 1721) and Mary Parker (1680-1713).
Thomas (1st) was the son of Giles Copes (the first, as there was more than one) B abt 1630 and Margaret. Giles married Ruth after Margaret, but it looks like Margaret was the mother to his children.
At this point here is a thumbnail summary of  my connection to:
Old Virginia Families (mostly Accomack and Northampton County)
Giles Copes & Margaret →Thomas Copes (1st) & Mary Parker→Thomas Copes (2nd) & Comfort Dix →Thomas Copes (3rd) & Susanna→ Hancock Copes & Elizabeth Curtis→ John Curtis Copes & Ann Outten → John Henry Copes
↯
* Captain John Henry Copes moves to Staten Island, New York.
* John Henry Copes M Isabella Sarah Catherine Egbert (of Staten Island, NY) →Louisa Copes.
* Louisa Copes M. Henry A Tilton →William H Tilton (of Brooklyn) M Flora Bancroft (of PA)
Wm Tilton & Flora Bancroft are maternal great grandparents.↲
____________
Before I forget:
Never forget the volunteers who diligently work on your records! I am thankful. This post was greatly helped by the Eastern Shore Public Library.
Without their helpful online information, I could not have done nearly as much research on the family in that part of the country. And, especially now that libraries are closed until the virus is weakened.
I thank tireless efforts of volunteers and librarians. One of whom, Mary Frances Carey, was paid tribute on their website. We owe a debt of gratitude for this important work. Volunteers who record this information, are people who should never be forgotten. An example of what is available here:
http://espl-genealogy.org/MilesFiles/site/p326.htm#i32522
Posted by PastRemains at 27 March