Bertha Charity Hawxhurst From 1899 to 1940s
Bertha was the youngest of six children. Her eldest sibling, Mary Willis, was nearly 19 years older than she.  Sister Mary married Edwin (Ned) Comly Tyson in 1887, uniting the Hawxhurst family of Long Island, NY and Tyson family of Pennsylvania.
Then, in 1899 some twelve years after Mary & Ned's wedding, Ned's brother Chester his parents a letter apparently saying that he and Mary's sister Bertha were planning to get married. (I’m not sure where he was when he sent the letter).
Here is Chester's father, Charles John Tyson's loving response:
I can only guess that father Charles, knowing her upbringing (in an established family on Long Island), hoped Bertha was prepared to be content living in the country as the wife of a farmer.
Chester had received his parents' blessing and not long afterwards (Feb 16, 1901). Bertha and Chester were wed before a Justice of the Peace in Jersey City, N.J.

Indeed, Bertha did live the life of a busy farm wife. Not the least because she and Chester had many children: twelve of them over the course of 20 years (1901-1921). Two of the twelve were females, my grandmother was the eldest daughter. Her sister never had children.

Though they lived in the country, several miles north of Gettysburg, life was busy.
But there are too many stories to cover in one blog post.
There were so many family events, farm events and business events, it seems that Bertha and Chester were always in motion. To simplify things, I've broken up the years between 1899-1940 into mini-eras:
1902-1906
~Children born 1902-1906: Don, Bob, Elizabeth, & Margaret
~Bertha's father-in-law Charles John Tyson dies 1906.
1908
~Child born: Frederick
~Bertha's father William Ephraim Hawxhurst dies 1908 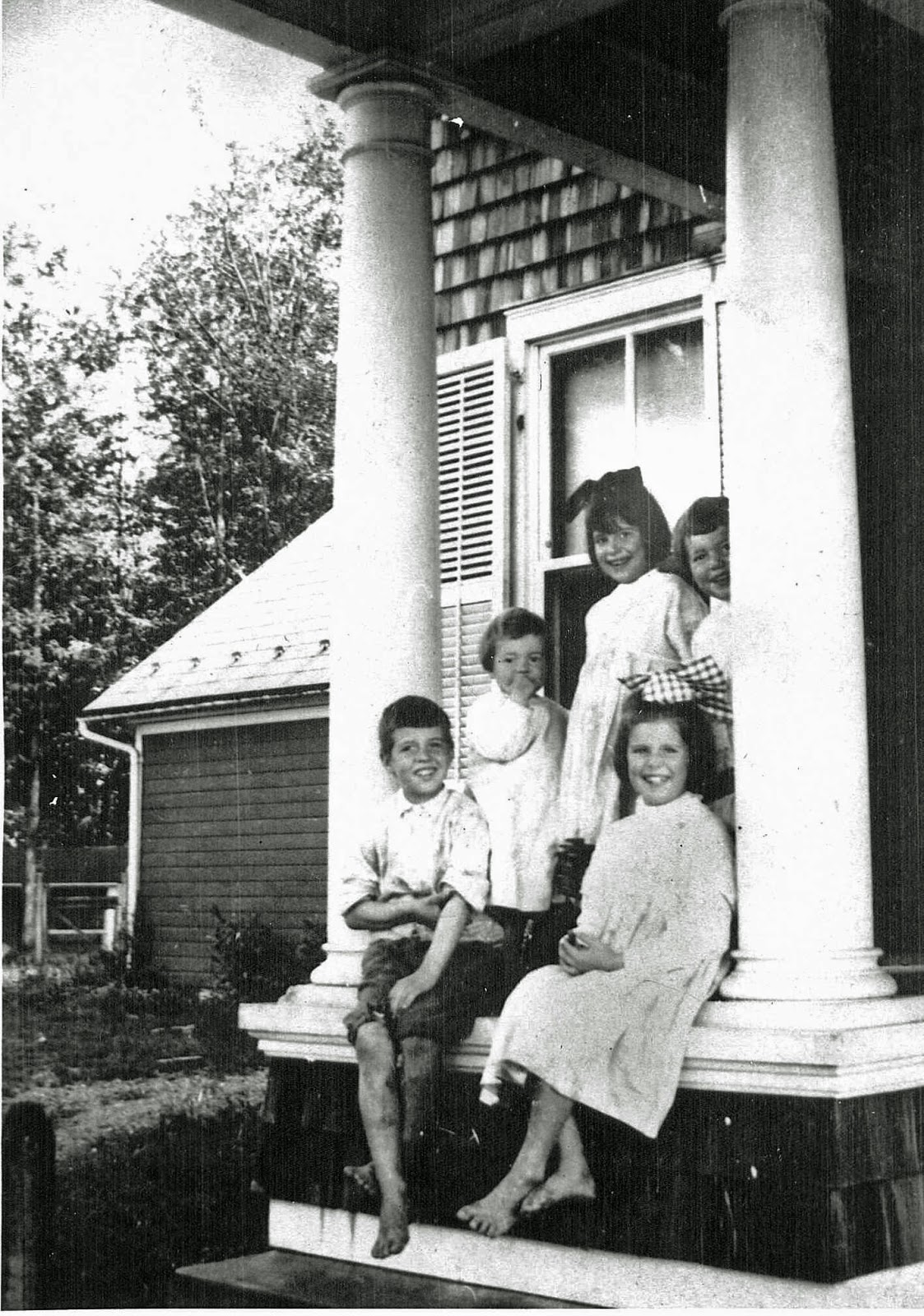 Schooling & College
Many (not all) of their children at one time or another attended George School and/or Penn State.
﻿

1925-1928 -Financial Woes
Chester (and others, notably Ned) worked very hard at resolving the business's financial problems. In  1925 Bertha first mentions Chester has “involved” her. From reading the diaries it seems the burden took quite a toll on him.
Here are a few of the mentions from Bertha’s diary of 1925:
...Feb frequent mentions Chester's fatigue and worry
..on Feb 7-“Chester quite worried over finances”
..on Feb 10-“Chester much worried over finances – involving me!”
..on Mar 28 mentions Chester seeing "lawyer regarding payment"
..on May  1 – Chester… “finances again”
..The rest of May she frequently refers to Chester as,“very fatigued” “v. tired”
..on May 21 – “Can’t sleep-finances again!”
..on Dec 21 – “Chester worried about finances!”

1928 Bankruptcy
~After the bankruptcy (see article below) in 1928 Chester,Bertha & family moved to Crestmont at the Adams/Cumberland county line.
This after all the holdings around Flora Dale were sold at Sheriff's Sale.
Crestmont had been bought at the sale by E. I. Nicodemus of Waynesboro.
He gave Chester, Bertha’s husband, a good deal in return for running the farm for him: he had to just cover interest on the mortgage and pay taxes.

Skip ahead, or if you are interested in reading the details, below is an article about the sale of the farm from The Gettysburg Times.
The Gettysburg Times, Thursday, April 5, 1928
Six Tyson Farms Sell High; 'Crestmont' Brings $30,400; Orchardists are Gratified G. W. Koser, Trustee In Bankruptcy, Disposes Of Chester J. Tyson Real Estate, And Declares Results "Speak Well For Faith Of Prominent Orchardists In Industry Of Adams County"; All Purchasers Announced.
The Chester J. Tyson orchard farms in upper Adams county, at public sales held Wednesday by G. W. Koser, of Biglerville trustee in bankruptcy, on the various farms, sold for a total of $106,800. This is the largest sale of orchard property held in Adams county in years and expressions on every hand today by prominent orchardists are to the effect that the prices "are highly gratifying and hold out high hope for the future of the apple industry in the county." Practically all the farms brought prices considerably above the official appraisal value placed upon them, in the bankruptcy proceedings. Six farms were sold throughout the day, as advertised in The Gettysburg Times the last four weeks. The"Crestmont Farm" of 170 acres, situated partly in Dickinson township, Cumberland county and largely in Huntington township, Adams county, along the state road leading from Biglerville to Mount Holly Springs, brought the highest price of all the farms sold. It was purchased, by E. A. Nicodemus, of Waynesboro, prominent Franklin county, Pennsylvania, and Washington county, Maryland, fruit grower, for $30,400. That was the first farm sold during the day and the sale took place at 10 o'clock in the morning. The "Morrison Farm" of 58 acres, situated partly in the borough, of Bendersville and part in Menallen township, was purchased by Howard C. Hartley, of Gettysburg, for $6,500. "Edgemont Farm" Brings $25,500 The "Edgemont Farm," sold at 3 o'clock Wednesday afternoon on the premises, and the last farm sold during the day, brought the second high price of $25,500. It was purchased by E. V. Bulleit, Gettysburg attorney at-law, for M. E. Knouse, large owner in the Peach Glen cannery and prominently identified with the fruit growing industry of Adams county. This farm comprises 252 acres and is situated in Menallen township along the road leading from Bendersville to Arendtsville. The "Sheely Farm" of 149 acres, situated in Menallen township, also on the public road leading from Bendersville to Arendtsville, was purchased by the Loco Realty company, of New York City, for Heller Brothers, Inc., for $18,200, and the "House Farm" of 168 acres on the same road was bought by the same interests at a price of $16,400. The "Bream Farm" in Menallen township, comprising 128 acres and situated west of Bendersville along the road leading from Bendersville to Arendtsville, was purchased by C. H. Musselman, Biglerville canner, for $9,800. Mr. Koser expressed his satisfaction over the results of the sale, which "speak well for the faith, of prominent orchardists in the future of the business."
1930s
~Crestmont Orchards:
Within a year or two, Chester Tyson opened a fruit stand by the house.
Legend has it that E.I. Nicodemus allowed him to keep all profits from the stand.
Instead of paying off the principal, Chester used those proceeds to pay for his children's schooling, including at Penn State and George School.
In her diaries that Bertha often injects a monetary amount. This might be the day's take from the stand.

Celebration
Though the Depression was upon them, in June of 1937 they celebrated the 50th Wedding Anniversary of sister Mary Willis Hauxhurst and brother Edwin (Ned) Tyson.

﻿Transcription from the Gettysburg Times:
“Original Wedding Suit, Dress Worn At E. C. Tysons' 50th Anniversary.
About 75 friends and relatives assembled at the home of Edwin C. and Mary W. Tyson, Flora Dale, on Wednesday to commemorate the couple's fiftieth wedding anniversary. All of the bride's brothers and sisters, who also participated in the original ceremony, were present on this occasion, including Wallace W. and Harold E. Hawxhurst, Mrs. Frederick Sharpless and Mrs. Richard Carpenter, Westbury, Long Island, and Mrs. Chester Tyson, of Gardners..

Mr. Tyson's brother. Chester J. Tyson, read the original marriage certificate and records of the twenty-fifth and fortieth anniversaries and all present affixed their signatures to the original document. Mr. Tyson wore his original wedding suit and Mrs. Tyson's bridal dress of 50 years ago was worn by her granddaughter, Judith Trowbndge Lambert.
The house was decorated with flowers, yellow and white predominating and arranged under the direction of Mrs. Frederic Griest. Refreshments were served and relatives and out-of-the-neighborhood guests were entertained later at the Flora Dale team room as the guests of Mr. and Mrs. William C. Tyson.”
– from The Gettysburg Times, Thursday, June 10, 1937

Widowhood
~ In 1938 Chester died quite suddenly.
~The following year, Bertha’s sister Caroline died (1939).
Subsequently, Bertha moved in with one of her children--first with Don & Irene.
From.... The Gettysburg Times, Tuesday, March 14, 1939
"C. J. Tyson Farm Sold for $16,000  E. A. Nicodemus, Waynesboro, purchased the C. J. Tyson  farm on the Gettysburg-Carlisle road, near Gardners, at public sale Monday morning for $16,000.  Forty acres of the farm planted in peaches and apples were sold to *Ralph Tyson for $1,025. A large crowd attended the sale which lasted all day. Prices for farm and orchard implements were fair." -The Gettysburg Times, Tuesday, March 14, 1939

*Note: son Ralph Tyson eventually bought back the remainder of the deposed property.
1940s
The US entered World War II in 1942.
~Several of her sons signed up for service of some kind as the entire country mobilized for the war.
~Although several of Bertha's adult children moved from the area, daughter Elizabeth, her three children and Elizabeth's mother-in-law moved back to Adams County from Philadelphia when her husband joined the Air Force.
~Bertha’s sister Mary Tyson died in 1941. Leaving Ned, Chester’s brother, a widower.
~“Ned” (Edwin Tyson) died four years after Mary in 1945, before the end of World War 2.
~Bertha’s brother Harold Ephraim Hauxhurst died in 1947.

Posted by PastRemains at 12 September