Towns of Denning & Neversink and What Was Once There
Cities tend to be the center of political power, so cities have a powerfull effect on the life and livelihood of those who live in small towns/the country. This is as true for New York, as it is anywhere. My area was impacted by the death of farming and the preservation efforts of the area by NY State for recreation and for NYC's water. (This is just a fact, not a judgment). The little hamlet of Sundown (it's not a town) is where I grew up. This is about places that are close to home, and here I’m including places that have disappeared. [This was my home more than a decade before my parents moved there. As it was in 1943]: 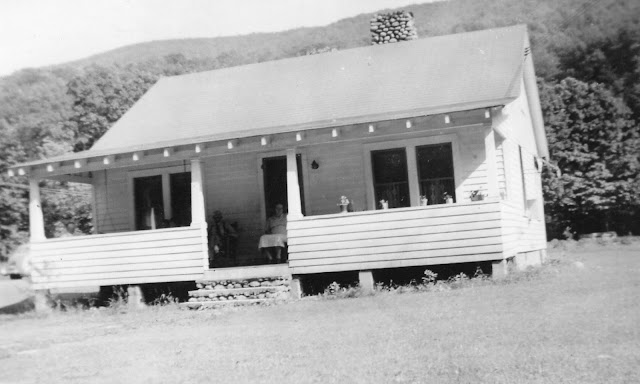 Sundown is, with Claryville, part of the Town of Denning. While the neighboring towns in this post are (for the most part) part of the Town of Neversink.
Note: New York uses the word “Town” as a political designation, not a geographic one. (Contrast this with townships of PA which are largely geographic).

CLOSE TO HOME 1 - Claryville & Environs: Looking at areas in the Town of Denning
Claryville – Claryville was, in the 1800s and into the 1900s, busy tanning hides. After that halted, the town barely survived.
It got a bit of a rejuvenation when the YMCA built a camp nearby, and then added to it throughout the years.
It's only recently become a beacon for people looking for a 2nd home in the Mountains, a respite from Big City Life. A recent visit to the old farms on the plateaus surrounding Claryville, I noted many empty farms have renovated houses on the property. Claryville has gorgeous views, and clean air and water. (But some roads are not plowed in winter!) Claryville once had a one-room school. A post office and two churches were built: one Methodist, one Dutch Reformed. Now it's got fancy art place/reception hall, and a thriving artist colony.
Hall’s Mills – Close by is Hall’s Mills is named for a mill. Now Hall’s Mill is a blink of an eye, but noticeable because it retains has a covered bridge. Possibly, as you whiz by from Grahamsville to Claryville, you may notice the bridge.
Willowemoc – Willowemoc is great in its unspoiled beauty. It’s west past Hall’s Mills and Claryville. There is little else around it—and it’s 100 miles from New York City. From Sundown, I would go here only in summer as there was no reason to go here. It was likely a good place for logging in the distant past, as the forest is dense. Nearby Claryville was a beehive of tanning activity, so Willowemoc was likely quite populated by workers at the time.
Other Hamlets near Claryville are Branch, Denning, Frost Valley, Ladleton.

CLOSE TO HOME 2: Grahamsville, Unionville and Curry.
Unionville- Right past the official edge of Grahamsville starts Unionville. Today they are no longer separate, but according to an 1875 map of the area, the Quaker Meeting house begins at the line separating the two towns. Unionville also had a church which was called the “tabernacle.”
The map shows a number of families named Curry, which is logical because barely though Unionville we are already in Curry (see next).
Curry – There was a post office from 1894-1963. But now you wouldn’t see it if you drove through it. Since my youth it had a small store and a gas station, a Post Office. Right now, it’s the intersection of the road from Claryville where it meets Rte 55. To be fair, across the Chestnut River, are several small settlements of homes nestled at the base of the hills.
Grahamsville – Named after General Graham who battled Indians in this area. Is the NYS historical marker announcing the reason for its name still there?
It had post office, stores, boarding places, banks, mills, library, churches, liveries and so on. Also, a two-room school house was here. (Closed before my brothers arrived). I read somewhere that the first school in the area was taught by Revolutionary War soldier, Christopher Darrow. Each hamlet located in the area provided a schoolhouse until….
SCHOOL in Grahamsville: Since my 'hamlet' of Sundown was tiny, my youth revolved around school in Grahamsville.
LIBRARY in Grahamsville: Grahamsville's Daniel Pierce library was, in addition to the school library, the center of all my reading enjoyment. It was a fierce and drafty brick building with a cannon in front of it and a list of names of men who’d served the country in the war.

PLACES OF WORSHIP in Grahamsville:
Though Grahamsville was largely a Protestant town it did have a Catholic presence:
Ok, it was in Unionville, but it is now part of Grahamsville. So it wasn’t in the heart of town. It began as Plains Meeting, then formed "Greenfield and Neversink Monthly Meeting." (Its partner, the Greenfield Friends Meeting, near Kingston was laid down, but its remains are next to a school on Rte 52 W, if you're curious).
This Meeting House with its bare benches, its wood stove and it paned windows was simple and neat. Apart from a new sign and fresh paint it looks the same today as it did in 1960, and probably earlier. I know it well, for my mother was a Quaker and worshiped here.
CLOSE TO HOME 3: Neversink, Bittersweet and Leroys Corners-and the Neversink Reservoir
“Neversink Sunk”
All the reservoirs in the Catskill system provide drinking water for New York City.
In the 20th century massive construction took place to send water to New York, centered in the Catskills for its  abundant fresh water.
On June 4th, 1953, Neversink (or Neversink Flats), Bittersweet and Leroy's Corners were flooded by the Neversink River to make the Neversink Reservoir. Note: the neighboring villages of Aden, Hasbrouck and Bradley were affected by the formation of the reservoir.
1.    Neversink – An early settlement (1800) at a location which is now a reservoir with that name. The residents had to move to higher ground with the flooding of the reservoir. The current location of Neversink is on Route 55, heading towards Grahamsville.
2.    Bittersweet –Presumed that name came because of an abundance of the climbing plant by the name of Bittersweet. There was a one-room school there. Residents were relocated.
3.    Leroy’s Corners- less well-known, this tiny place abutted the Neversink Flats and is barely remembered.
CLOSE TO HOME 4: Montela, Lackawack, and Eureka – and the Rondout Reservoir
Rondout Reservoir Wipes Out Three Villages
Neversink wasn't the only reservoir close to my home. The closest one, and I think less well known, is the Rondout Reservoir. The Rondout's construction began in 1937.  Construction was suspended for World War 2 and for the Korean War. It was finished July 18, 1955.
But before that, three villages had to be evacuated: Eureka, Lackawack, and Montela. These tiny villages housed over 1000 people, and we’re not counting chickens (or other things).

Did you ever wonder what happened to the interred? Those buried in eight cemeteries had to be moved. (I don't know where).
1.    Lackawack itself was moved and remains (but in a different spot).

2.    Montela was the site of the Battle of Chestnut Woods (1778). It was only established in the late 1800s and it straddled Sullivan and Ulster County. Montela got a post office after the Civil war, and it was inside a store (as most were).
3.    Eureka was founded in the 1700s. It had a Post Office and a one-room school. and closed in 1942. The reservoir can be seen on Route 55A, from Grahamsville to Lowe’s Corners. If you turn off before Sugar Loaf Rd, you can circle the entire reservoir.

Close to Home 5: Home and Beyond it, Just Spots on the Map
Lowe's Corners, Sundown, Greenville, Bull Run (Peekamoose).
1.    Lowe’s Corner – Lowe’s Corners must have been a corner at one time. I know there was a post office there for a brief period before the Civil War. A Methodist Church is there—and has been there for decades.
Sundown (Town of Denning and Ulster County).
2.    Sundown: This was home, a “hamlet near the Denning line on route 46.” It had a school house, more than one church. When I was young a Methodist church and church hall, a post office (in our house), a general store with gas pumps (till it was outlawed for water health).
This 1925 paper is a bit chilling to read. I know most of the names--and knew some of the people. WOW!  (I guess I'm old).

And Dots on the Map Beyond:
1. Bull Run -AKA Peekamoose – Go left at the Methodist Church in Sundown.  Its name was changed to "Bullrun" using one word. And later it was re-named "Peekamoose" in 1904 when Paul Sheeley was postmaster.
2. Greenville: Go right at the Methodist Church in Sundown. Greenville is near the east Denning line, on route 46.
Now I’d better stop because once we're in Yeagerville, we will loop back to Lackawack.


References and more reading from this area of the state:

A great place to visit for genealogy and history of this area. It has some records, photos of families. It also devotes a portion of the museum to the area before,during and after the building of the two large reservioirs:
1. Time And Valleys Museum (Grahamsville, Sullivan Co, NY)
https://www.timeandthevalleysmuseum.org/

2 NYC Board of Water Supply:
https://www1.nyc.gov/site/dep/water/history-of-new-york-citys-drinking-water.page

Any and all mistakes about the accuracy of this post can be sent to Dave Higgins. :)