Traditional trees make it a bit distracting to follow her line, so I've simplified it with my own chart so I could easily show how I’m descended from Francis and Lucretia (Pinney) Barnard.
Read the left side of the chart below to follow the descendancy by offspring. 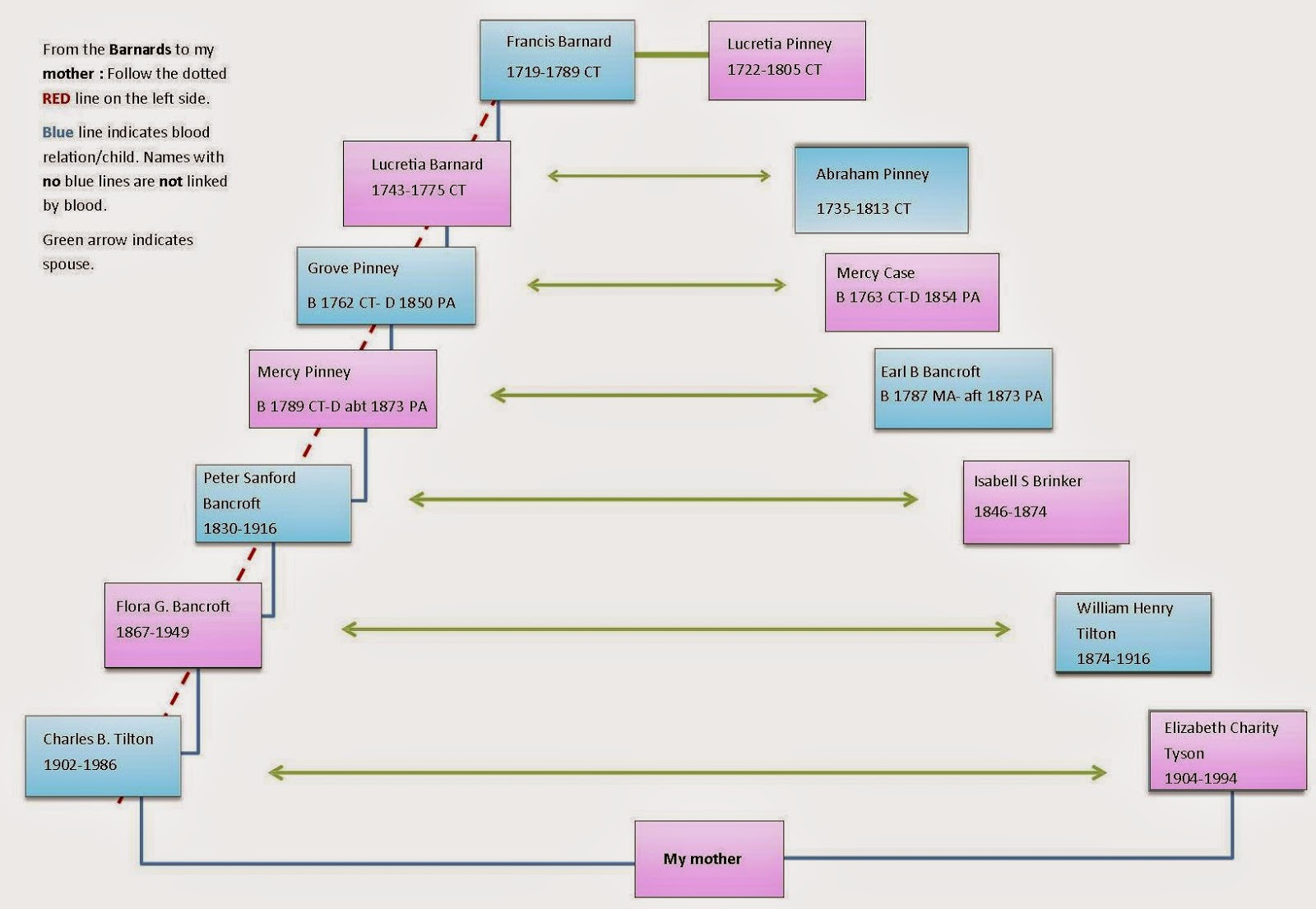 Lucretia Barnard's Marriage
She married Abraham Pinney (they had at least 8 children). A son, Grove Pinney, (1762-1850) was my 4th gr-grandfather.
Lucretia (Barnard) Pinney's Death
Lucretia Barnard died before the Revolutionary War had begun on October 26, 1775 in Bloomfield, Connecticut.
She had twin boys, Elijah and Elisha, the same day she died. That leads me to believe the cause of her death was tied to the childbirth.
Lucretia's widower Abraham Pinney’s further marriages:
[As an aside: Abraham remarried several times. His 2nd wife was a Sarah Clark (d.10 Jun 1811), his 3rd  wife was Hester Case (Higley, widow of Brewster Higley) and his 4th wife was Ruth Cossett (Perkin) (d. 1836), widow of a Mr. Perkin or Perkins]

War for Independence in America
The Revolutionary War changed everything for everyone.
As mentioned Lucretia, Abraham’s 1st wife, had already died when it began.
However, Abraham Pinney (my 5th gr grandfather) volunteered and was a Lieutenant in the 9th Company from Simsbury, Conn.
He was also with the 18th Regiment in Boston during Lexington Alarm. He served in New York State throughout the war.
The Barnard Family in the Revolutionary War
Abraham's service in the War for Independence was a bit overshadowed by his in-law's family.
Why?
Francis Barnard & his wife Lucretia (my 6th gr grandparents, Lucretia’s parents) who were still alive at the time, saw all seven of their sons fight in the American War for Independence.

The Barnard House
Apparently that all 7 sons went to war made an impression on the locals.
Someone eventually paid tribute to the sacrifice of the Barnard family: the Francis Barnard house was memorialized by a plaque. 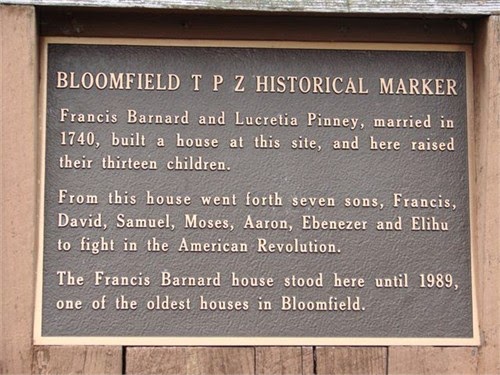 
Francis Barnard and Lucretia Pinney, married in 1740, built a house at this site, and here raised their thirteen children.
From this house went forth seven sons, Francis, David, Samuel, Moses, Aaron, Ebenezer and Elihu to fight in the American Revolution.
The Francis Barnard house stood here until 1989, one of the oldest houses in Bloomfield.

This plaque had replaced an older one: 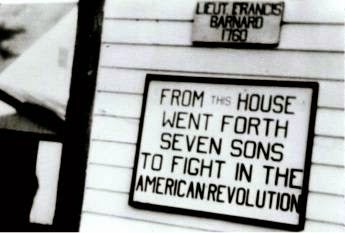 Who were these Seven Sons?
Here is a list of the seven Barnard sons / Lucretia’s brothers who served in the American Revolution. 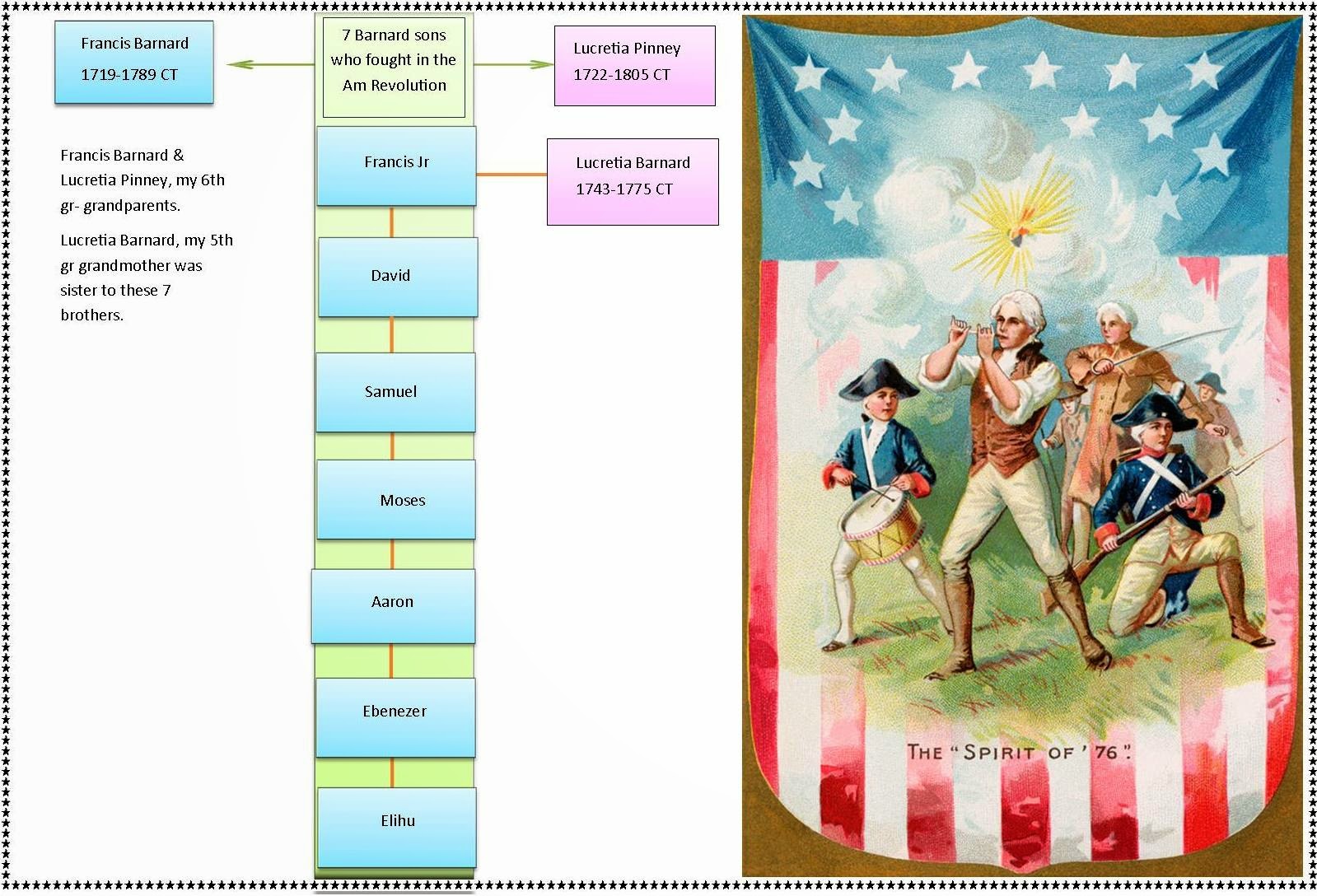 Posted by PastRemains at 18 December