Genealogy is just the old story of humanity--set in the past. The ups and downs and heartaches of life all happened before. My grandfather's uncle isn't the focus of my genealogy-but I like to add his spouse to his name for any descendents.

While completing this task, I was reminded that there are twists in all stories: I was stumbling across oddities with regard to William H Tilton's brother Clarence over and over. These oddities kept calling my attention--till I finally answered the call to unlock the mystery.
Oddity 1 - An obituary of William & Clarence's father (Henry A Tilton) contained a sentence about one of two his sons:
“A son, Clarence Tilton, was coroner's clerk under Dr. Morgan Parker, but now resides in the south.” [from the Paint, Oil and Drug Review Vol LII-No. 15, Chicago, Wednesday, October 11, 1911.] Then the next paragraph repeats the surviving members of the family--and Clarence is included in this as well. Why does the father’s obituary mention Clarence twice and why include this Dr. Parker? Who was he?

Then I found Clarence and his parents listed in a Detroit social club "The Wallace." 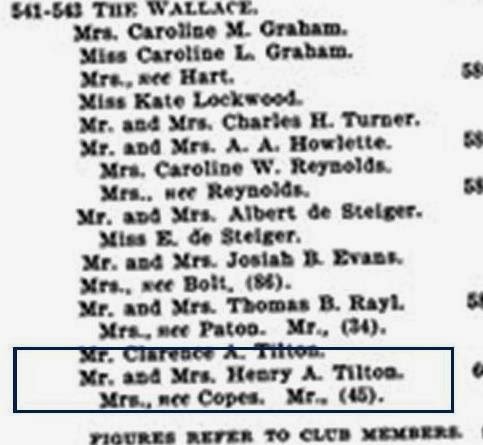 While that is not surprising, it did tell me something about this eligible bachelor (not a problem, just additional information).
Oddity 2 - Clarence moved many times after Detroit--to sparsely settled areas of
the country. My spouse suggested a scandal. Maybe, or maybe an itchy foot.
Oddity 3 - Clarence had a son according to the census records. However, the son was born in  Montana in the years Clarence was in Detroit. How'd he -or why did he do that?

Finding the answer: I wasn’t very clever, I just backed over the answer -
I looked for the wife to find out more about the husband. This isn't the most efficient route, normally. But in this instance it was a gold mine. Once I found out her complete name (Bertha Francis Parker), I found that she gives her name (variously) as Bertha Parker, Francis Parker, and Frances Parker. I did a simple internet search for Frances Parker and
found this about her:
“She was now a sought after author—McClure’s Magazine had asked her to write short
stories. It was most likely at this time that she found that which had been missing from
her life—true love.
The object of her affections was Clarence Tilton, a handsome accountant two years younger  than Frances. Tilton had moved to Detroit from Brooklyn, New York, in 1893 and now served as Clerk for Frances’s brother, Dr. Morgan Parker, the Wayne County coroner.”

I backtracked with that name and was able to piece together this: she (Bertha Francis Parker) was born January 17, 1875 in Detroit, Michigan to (Dr.) Dayton and Ida Cogswell Parker.  Her father became a professor at the Michigan College of  Medicine & Surgery.
So they were well-off. But she lost her mother on August 15, 1889. Only four months later in December 1889, her father got remarried to a widow, and Frances had a stepmother who was 15 years younger than her father.

Less than 2 year later when Bertha Francis Parker (or Frances Parker, as she called herself)
was 16, she graduated from school. Life at home was no longer to her liking so she looked for an escape. As it turns out, her cousin going to Montana to join her brother there, so Frances decided to go along.

While in Montana she met Carson Minor (C.M.) Jacobs, the manager of the N Bar N Ranch. She had fallen in love. When her father came out late in the year, the 34 year-old CM Jacobs asked for permission to wed his 16 year-old daughter.

Frances and CM were wed in Detroit in December 1891. And they eventually returned to the ranch in Montana to live.
Yet despite the distance, Frances enjoyed annual visits from family, and sometimes gained household help through their generosity. In addition, she often returned to visit her family in Detroit. In her free time in Montana, she spent a good deal of it writing her "romance" stories based on in Montana. Her husband left the N Bar  N to do his own ranching, which moved house for them--putting her in a more isolated location.

Their son Parker was born on August 1, 1897. By November Frances with baby Parker, and her sister Beatrice, were back in Detroit for the winter.

Frances looked for publishers--and finally in 1903 C. M. Clark Publishing Company (Boston) published her western romances, Marjie of the Lower Ranch. Her next book was Hope Hathaway, A Story of  Western Ranch Life, which contained watercolor illustrations by Charlie Russell.

By 1904 it was clear that the family changes, lifestyle changes and her long absences, had taken its toll on the marriage: it was is falling apart.  In 1905, Frances ignored a court summons of desertion and abandonment, and instead collected her belongings and her son. She then returned to Michigan--never to return Montana. Officially the marriage was  over in October 1905. Son Parker did eventually return to Montana where he lived there till after high school (1915).

Frances moved to her father’s farm south of Detroit to Rockwood, Michigan. But she was now a published author. The famous women's magazine, McClure’s, has asked her to write short stories. Then, according to the biographer quoted in the start, Frances met and married Clarence Tilton in 1906.
It turns out that the Coroner named Dr. Parker mentioned in Henry Tilton's obituary is his wife's brother, not her father. It’s possible that  Clarence and Frances met at a family event--a party or a dinner to which he was invited.
The couple lived in Detroit for four years before moving to Bradenton, FL. Possibly once out of the Detroit social circles - where divorced women were still a scandal-it's possible Bradenton was more to their liking.

But by 1911, Clarence’s father (Henry Addison Tilton) was at his daughter’s in Chicago dying. Son Clarence travels from Florida, and son William from Butler, PA, to go to their father’s bedside.
I wonder if the their wives went, too: if so, how Flora G Bancroft Tilton (wife of William Tilton) and Bertha Frances Parker got along? Likely the two women knew how to behave. I wonder if  Frances was bold? Did she give Gertrude an autographed book? I wonder if my grandfather (who would have been a young boy) go with them?
Next Clarence became the County Auditor in Florida.
But as World War 1 drew near, he moved on to New Mexico. Sometimes the facts aren't enough: If I had known nothing of his wife’s first marriage, I would have thought he might have dragged her there. Now I am not sure this is the case at all. She might have been planning to incorporate Southwest Indian traditions in her next novel.
In New Mexico Clarence worked as an Auditor for the US government. Apparently the Southwest agreed with them: after New Mexico, Clarence takes a job in Arizona at  a mine. Frances' son Parker came to stay with them. Parker Jacobs (his father's name) tends to pop up in the census bearing with the Tilton last name.
One biographer wrote this about their final days:
“By 1920, Clarence and Frances had moved to Jerome, Arizona, where William A. Clark’s United Verde Copper Company operations were booming, and Clarence found work as an accountant.
Frances’s sister Beatrice and her family moved to Jerome, and, surprisingly, Parker Jacobs [Tilton--in the census], who had graduated from Chinook High School, also lived with them, working as a machinist at the mine.
Not long after this, Clarence became ill with bronchial asthma, and his declining health meant Frances needed to earn an income.
She began writing in earnest … but C. M. Clark had gone out of business, and she had no connection with another publisher. Neither her personal life nor her professional life improved.
Clarence Tilton died of heart and bronchial ailments at age forty-eight in October 1925. Thereafter, Frances buckled down to finish “A Woman of the Border” and submitted it to Curtis Brown, International Publishing, in April 1926. It was rejected.” -- **from "Romancing Montana - Frances Parker, Western Writer" by Mary L. Helland, 2010. ***
I am indebted to Ms Helland's research on Frances Parker for filling in the gaps-and used large portions of her article. Full Article by Ms. Helland is here:
Montana Womens History - Mary L Helland


Posted by PastRemains at 14 March