The Amazing Gilpin Story
How am I related to the Gilpins?  Here is a quick look: Gilpin --> Cook--> Griest -->Tyson-->my mother
Here’s a more detailed version: 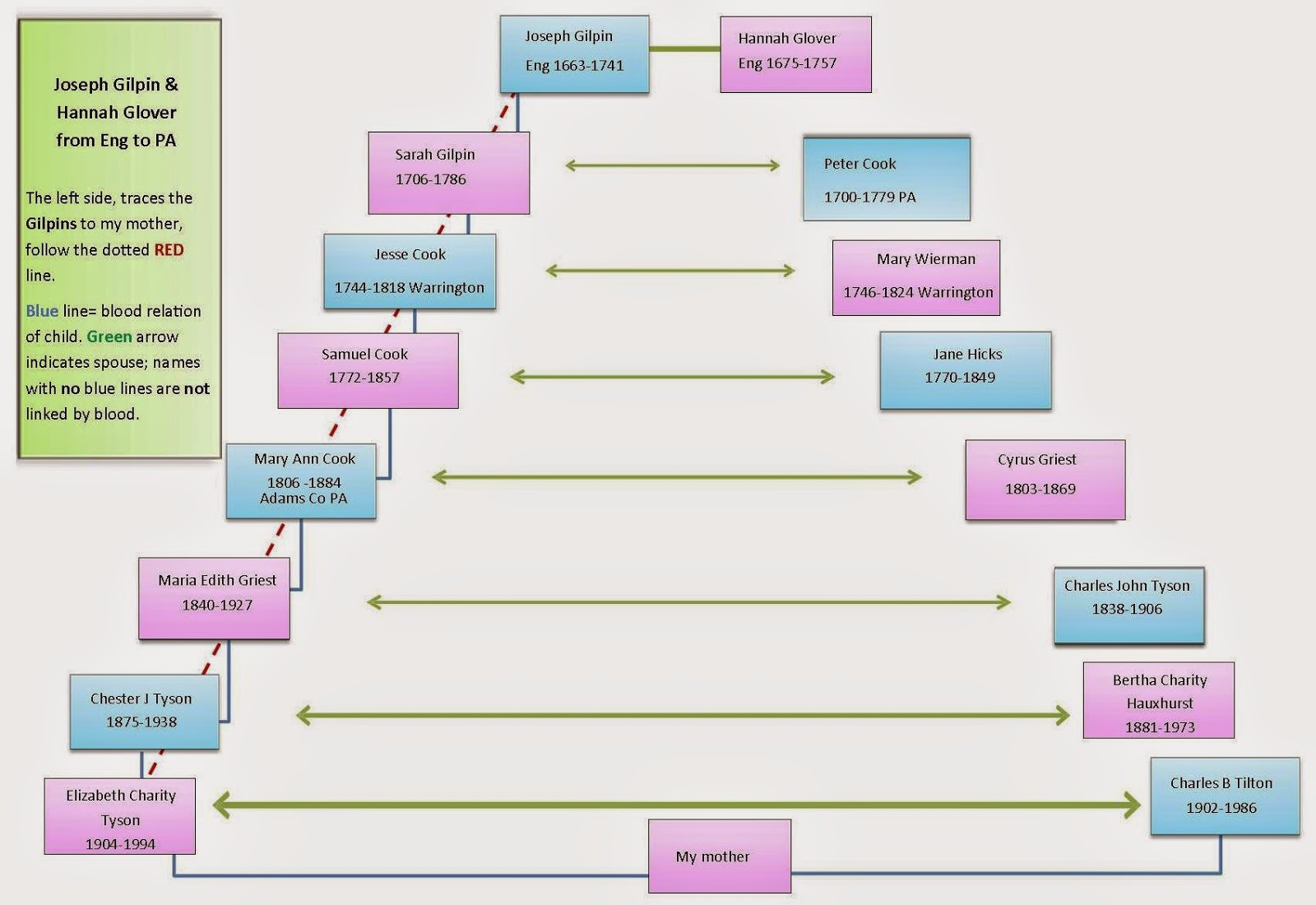 Found tucked inside the book, “History of Chester County, Pennsylvania, with Genealogical and Biographical Sketches Volume 2,by J. Smith Futhey and Gilbert Cope, is this sketch of the Gilpin family history:


"The ancestry of this family can be traced in a direct line to Richard De Guylpin, who in the year 1206, during the reign of King John, became  the owner of the manor of Kentmere, which was bestowed upon him by the baron of Kendal for deeds of prowess, and as the name indicates, are of Norman extraction.”

also found there is this about Joseph Gilpin:

"Joseph Gilpin of Dorchester in the County of Oxfordship, son of Thomas Gilpin of Warborough in the same count, tallow-chandler and Joan his wife was married 1691 to Hannah daughter of ? and Alice Glover of county of Southhampton.


They came to Penn in 1695 and settled on a tract of land in Birmingham township in Chester (now Delaware) County which had been given to Hannah his wife by an uncle as a marriage present.


Their first dwelling was a cave on the side of a hill, such as was frequently used by the early settlers until better structures could be provided.


Some years thereafter he erected a frame dwelling house. He resided there the remainder of his life. He died in 1739 at the age of 75 years, leaving 15 children, and 45 grandchildren."

Hold on! Did I just read that?
Wait, what?

The Lord of the Manor, the Gilipin Family, go from living in a MANOR HOUSE to living in a CAVE?
Did I just read that?
Yup, from hero to zero; from Kentmere hall to a mere hole in the earth.

How Did That Happen?
From manor to America

Thomas (senior) was an officer in the army (Cromwell’s).  It was after the battle of Worcester in 1651 joined the Society of Friends.

Thomas, though he had been on the winning side, presumably became sickened by fighting against his own countrymen, joined the Society of Friends (and signaled himself a pacifist in so doing).

The Amazing Gilpin Story
The Gilpin family who left England to live in Pennsylvania: Joseph Gilpin, Hannah (Glover) and their two small children.

Thomas's Son, Joseph Gilpin
Mentioned above, in1664 Thomas’ wife Joan had a son, my ancestor, Joseph.
His father Thomas had suffered persecution as a Friend and had been jailed.

Possibly worse, his parents, Thomas and Joan Gilpin lost almost everything, even the crops from the fields on his farm. He and his family were
................""left with not a pot in which to boil their food.”

Their son Joseph was born in the middle of persecution and would possibly wished to live far away from persecution Quakers experienced in England.

Son Joseph Gets a Break

Joseph's wife was Hannah Glover and Hannah's uncle, William Lambel/Lambol of Reading, had purchased 625 acres of land in the Delaware Valley near Newcastle on Delaware in the American colonies.

Joseph & Hannah's break came when Uncle Lambol gave 100 acres of this land to them (allegedly as a wedding present?).

Emigration
Having land in the colonies made immigration to Pennsylvania attractive to Joseph and Hannah.

But by the time they were ready to migrate, they were already a family.

The first two children were born in England before their emigration: Daughter Hannah Gilpin was born in December 1692 and son Samuel was born in April 1694.

The Gilpin family emigrated to the colonies in 1695: Joseph, Hannah (Glover) Gilpin and their 3 year old and a 1 year old infant.

Welcome to the New World?
The Gilpin’s grandson Isaac Glover Glipin wrote of his own account of his father’s and grandparents’ life in the new world:

In 1695 Joseph Gilpin, weaver, and his wife, Hannah Glover Gilpin, arrived from Dorchester, Oxfordshire with their two children.

They left the ship at Newcastle and were guided inland [on foot] by the Indians to the land where they were to settle  near Birmingham township, Chester County (now Philadelphia).

This was their introduction to the new world.

Hannah's uncle, William Lamboll of Reading had given them 100 acres which of the total 625 acres he had bought from Penn.

The Indians told them they must build near a spring.


However, they spent the winter in a cave  [In the cave] Hannah had their third child.  Rachel was born.

Cave Sweet Cave
How long did they live in the cave?

The Gilpin family lived in the cave for 5 years and while they were still living in the cave, their family grew by two: Rachel (as mentioned), and Ruth in 1697.

"Joseph was busy clearing his land (of trees) and at the same time a small house and barn were constructed. The house was later destroyed in a fire."

"Joseph then built a frame house a few hundred yards to the westward, it was built two stories high, 16 feet by 18 feet, a superb edifice for the time.”

Washington did Not Sleep Here
Of their house:

Of the house the Gilpins eventually built (yes, they left the cave), Bob Cooke writes:

“Architects and historians now believe that the frame part of this house, first section built, was Joseph's original dwelling.
They consider it ‘probably the oldest frame house in the Delaware Valley - one of the few remaining examples of an English type frame house covered with clapboards, typical of the seventeenth century. - Most of the present clapboards are hand-split and shaved red oak.’
It may have been enlarged by Joseph - (let us hope so, since he had fifteen children!) - and later by his son Joseph, Jr. and his grandson Gideon.

Gideon owned the place during the Battle of the Brandywine, when Lafayette was his overnight guest. The situation was probably arranged by Gideon's first cousin, Colonel George Gilpin, aide to Washington, who was disowned by Concord Meeting. Lafayette stopped again in 1824 and paid his respects to old Gideon.

And it is in Lafayette’s honor, rather than the Gilpin family, that this house has been restored, suitably furnished.”

He adds:
“Historians now agree that this was Joseph's original home, right on the Baltimore Pike, originally called the Chester-to-Nottingham Road.”

Their Children
Joseph and Hannah had 15 children:

Life at the Gilpin's Home

Here is more from grandson Isaac Glover Gilpin account of his father’s and grandparents’ life:

There were a number of Indian wigwams on the farm of Joseph Gilpin, and the account we have is-that they all lived together in perfect harmony.


Joseph Gilpin's house was seldom clear of the Indians who frequently slept there, perhaps a dozen or more at a time - men, women and children, all peaceably and much friendship.


The children of Joseph Gilpin give very pleasant and interesting accounts of their sports and games with Indian boys, of their shooting with them for days at a time with bows and arrows, there was no quarrelling or fighting.


The Gilpins as friends--and as Friends

Joseph Gilpin's hospitality was likewise extended in equal measure to all newly arrived emigrants, quite in contrast to his own reception the night after landing.

As he was so well known there great numbers of families on coming over, came to his house, where they were kindly received and entertained week after week.

As an evidence of this writer, who was an inmate of Joseph's family-knew that he killed

upwards of 30 hogs and 7 or 8 [?] in the fall season and the meat was all duly   and frugally consumed by the next harvest.

was the best of housewives, and superior to most in intellect and friendly conduct.


Thomas Chalkey (1675-1741), the celebrated Quaker preacher who traveled extensively in the colonies for the Friends makes the following note in his journal
[in 1740]

Lodged at the widow Gilpin’s, who’s husband, Joseph Gilpin, was lately deceased; there was true Christian Love and friendship between us for above fifty years.
When first I saw Joseph in Pennsylvania, he lived in a cave in the earth, where we enjoyed each others company in the love and fear of God.
This friend had fifteen children, who he lived to see brought up to the states of men and women, and all but two married well and to his mind.

As stated in Chalkley's journal, of the fifteen Gilpin children all but two had, prior to the father's death, in 1739, "married well and to his mind."
The youngest son [Joseph] and the youngest daughter, [Esther] married shortly afterwards.

Longevity
Despite the deprivations, the family was healthy

The Gilipin family has been called a “remarkable case of longevity,” in that only one of the 15 children died under the age of 60 years.

Common for the period, families lost one or more children to childhood illnesses and/or accidents, yet remarkably all the Gilpins grew to adulthood.

At the time of mother Hannah Gilipin’s death in 1757, there were 12 children, 62 grandchildren and nearly as many great grandchildren, 133 living descendants in all. (Frank William Leach, 1908)

LAST WILL and TESTAMENT of Joseph Gilpin

And I do hereby name and Constitute my Loving Wife and my Son George Gilpin and my Son in law Joseph Mendenhall Executors of this my last Will and Testament (Given them full power or the Survivor of them full power and Authority to sell my aforementioned tract of land and make Conveiance of (said) land with the appiontenances for ever as firmly as if I was present) Revoking all other Wills and Testaments by me made.

In Witnefs whereof I have hereunto set my hand and Seal this Twentyninth day of the Eighth month Anno Dom One Thousand seven hundred and thirty nine. Joseph Gilpin (Seal)
Signed Sealed Published and Delivered by the within named Joseph Gilpin as and for his last Will & Testament in the presence of us
who in his presence inscribed our Names as Witnefses
Samuel Painter, Jeremiah Dean, Nathaniel Ring.

KNOW all men by these presents that Hereafter I George Gilpin was Constituted and Appointed by my Father Joseph Gilpin to be one of the Executors of his last Will and Testament and not thinking fit to take upon me the Execution thereof Therefore for several good Causes and Conciderations me thereunto moving I have refused to act as one of the Executors of the Will Giving myself sent and Consent that letters of Administration thereof may by any [unin] be granted to His other two Executors. Therein named and faith I do hereby make that I have no ways [unin] any of the Testors Effects As Witnefs my Hand and Seal this fifth day of December Anno Dom 1739 George Gilpin (Seal)
Sealed and Delivered in the presence of Nathaniel Ring, Joseph Parker Chester Decemb. 5, 1739. Then Personally appeared Samuel Painter and Nathaniel Ring two of the Witnefses to the above and within written Will who on their solemn Affirmations do declare that they were present and saw the Testator abovenamed Sign Seal Publish Pronounce and declare the above writing to be his last Will and Testament and that as the doing thereof he was of Sound mind and memory to the best of their understanding. ------
Affirmned before Jo. Parker [unin]


Posted by PastRemains at 06 March