53 Ancestors #44 -Chester Tyson, Advisor to Hoover in the Great War (WW1) and the Aftermath to Feed the Starving

This certificate grabbed me. My great-grandfather, Chester J Tyson, was the recipient of it. So what is the story? It is about more than him, his family and community. (Chester's life is touched on in Post 1#. His timeline is in Post #36.)
More Leads
A saved clipping shed light on the certificate: "National Advisory Committee" and dinner with Hoover once Hoover was President. 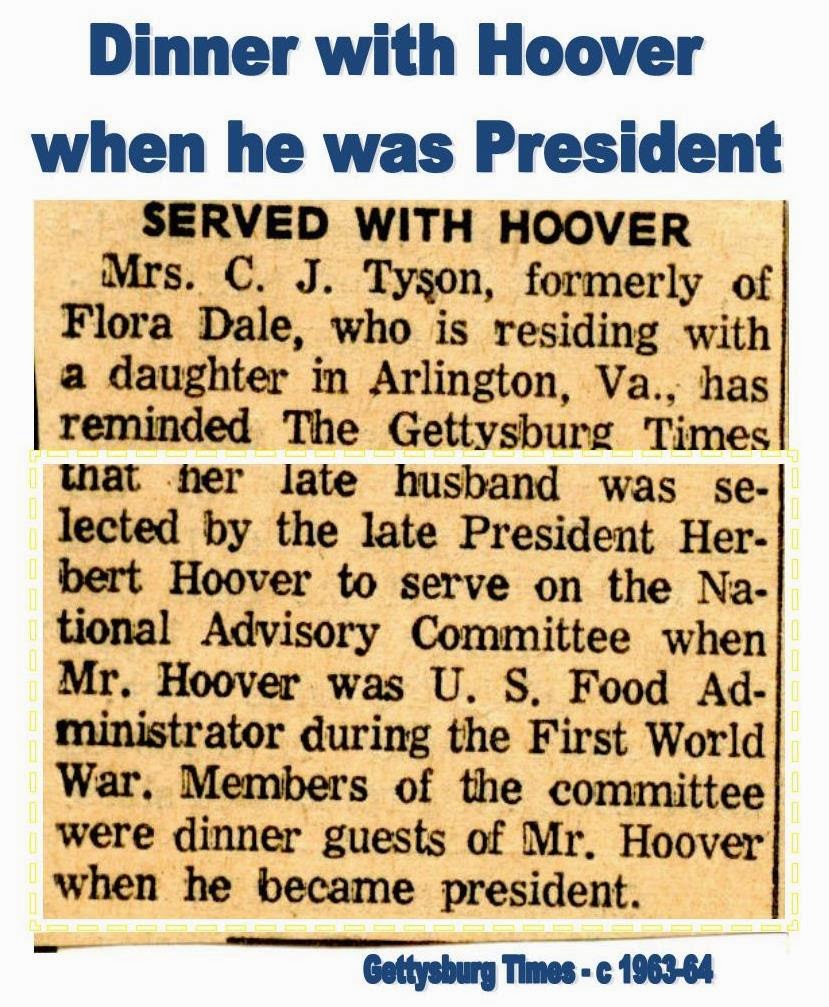 Now I'm interested
Chester has a photograph of himself in that group, who had dinner at the White House,
with four Presidents: Taft, Coolidge, Wilson, and Hoover.
What did he do that he should be invited to a White House?
It turns out that for many years, Chester J Tyson served as an advisor to Hoover (before he was president).

For many years, from WW1 to into the 1920's, the US sent food to European nations, and Hoover oversaw this.

This is called "aid"--something I know a bit about as my husband's been involved in aid to foreign countries for decades.
Yes, Chester Tyson (though a Quaker) registered for the draft:


Food Relief and the US - World War I
The U.S. Food Administration (USFA) was headed by Herbert Hoover (future President).
Hoover was to get food to war-torn countries in Europe (he also headed food conservation efforts in the US).

Prior to entering the war, the US was officially neutral, and shortly began sending food to Germans.

From there it rapidly expanded, broadening the relief effort to many countries in Europe.

Chester J Tyson's Role
Hoover asked Chester to serve as an expert during WWI on the US Food Administration's Agriculture Advisory Board.


Why it was called The Great War
~WWI was fought in more countries than you probably knew existed.  WWI changed nations' boundaries and their economic & political structures for decades to come.

~ In Russia the Bolshevik Revolution was going on/just occurred.

~I looked at Wikipedia and was amazed at the list of battles in countries that I had not have known were engaged in World War 1.

The Expanded War & Need for Food
The reach and distribution of food relief was greatly expanded beyond France & Belgium and Germany, adding countries suffering conflict and distress.

As an example, Romania was fighting for its life. And yes, the USFA sent food to Romania.
Here is a poster rallying Romanians to join the Romanian forces:
End of War Nov 11, 1918
The end of war didn't bring an end to hunger and the need for food.
People in all parts of Europe were suffering.
The relief effort continued and its name was
changed to:

American Relief Administration or ARA
After World War I the ARA gave food relief to Europe with  Hoover serving as program director.

In 1919 the US Congress provided ARA a budget of $100 million. Private donations made up another $100 million.

23 Countries Served
In the immediate aftermath of the war, the ARA delivered more than four million tons of relief supplies to 23 war-torn European countries. Including Romania.

ARA ended its operations outside Russia in 1922; in Russia it operated till 1923. 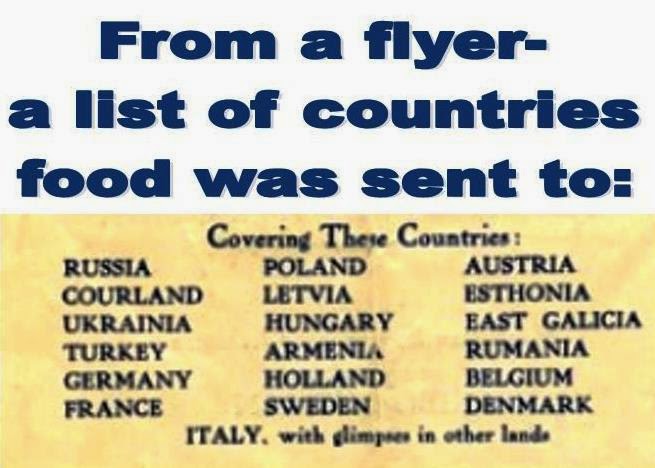 USFA and ARA work
Chester also worked hard as an expert advisor to Hoover's relief efforts
Below is a sampling of a few saved telegrams from Chester to Hoover and from Hoover to Chester. 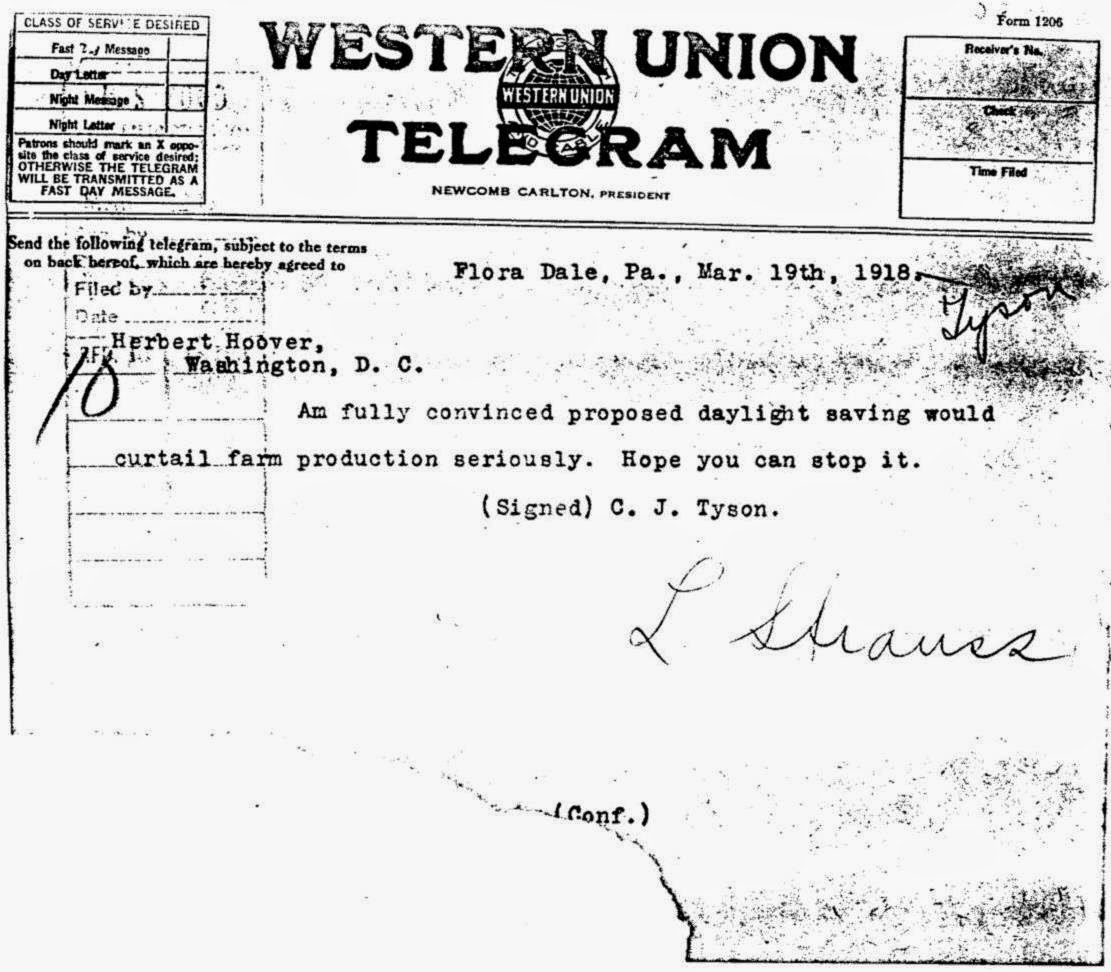 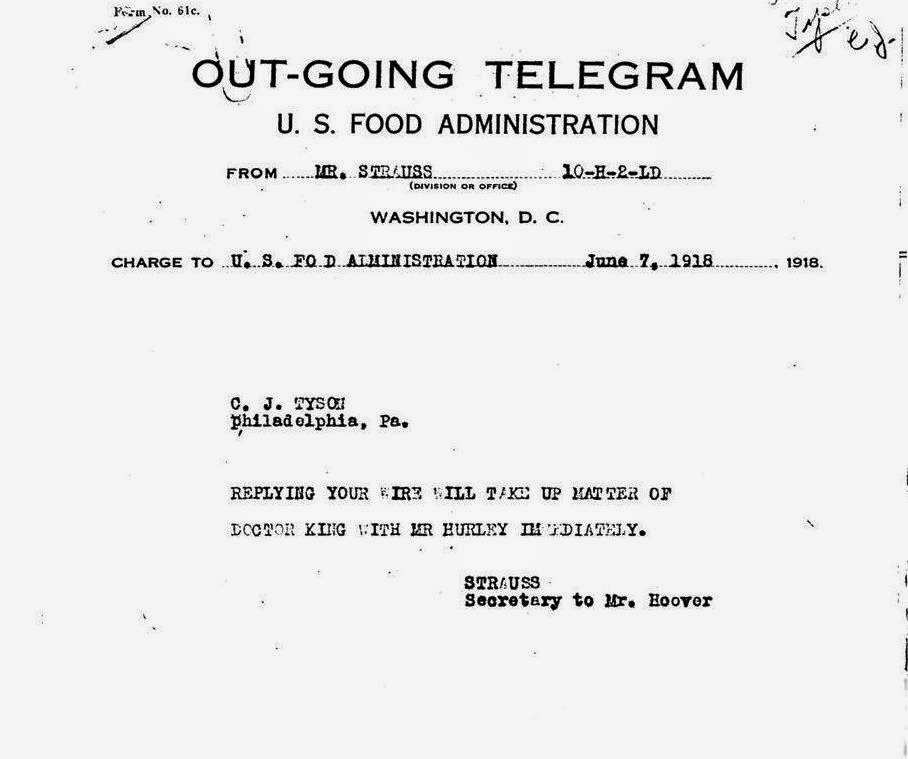 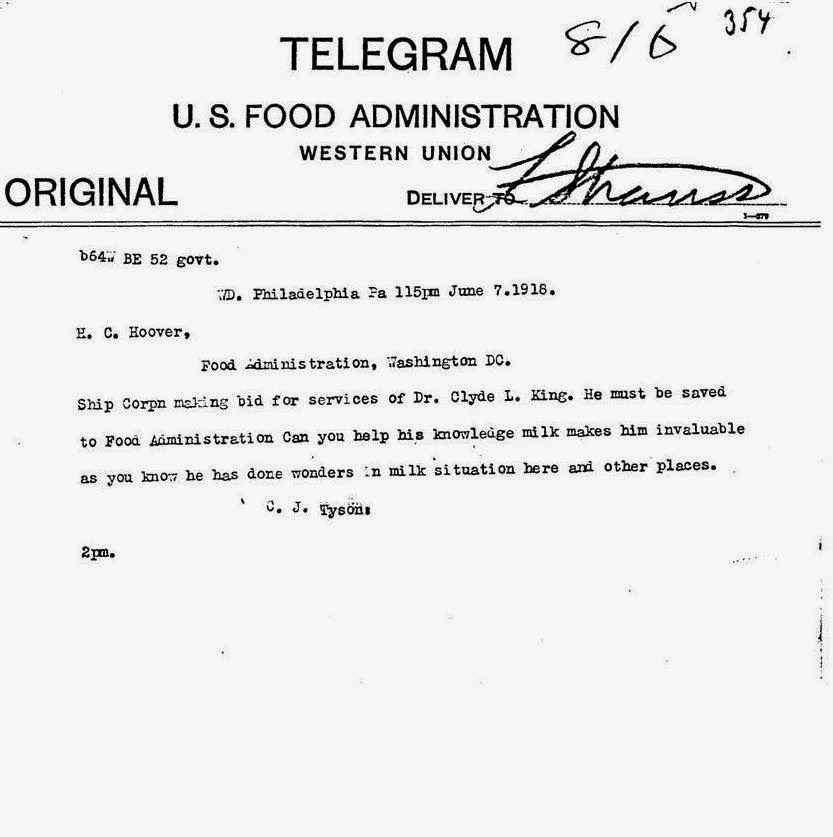 ARA's efforts at home and abroad:
At home, the ARA worked to rally support to conserve food so supplies could be shipped to Europe: 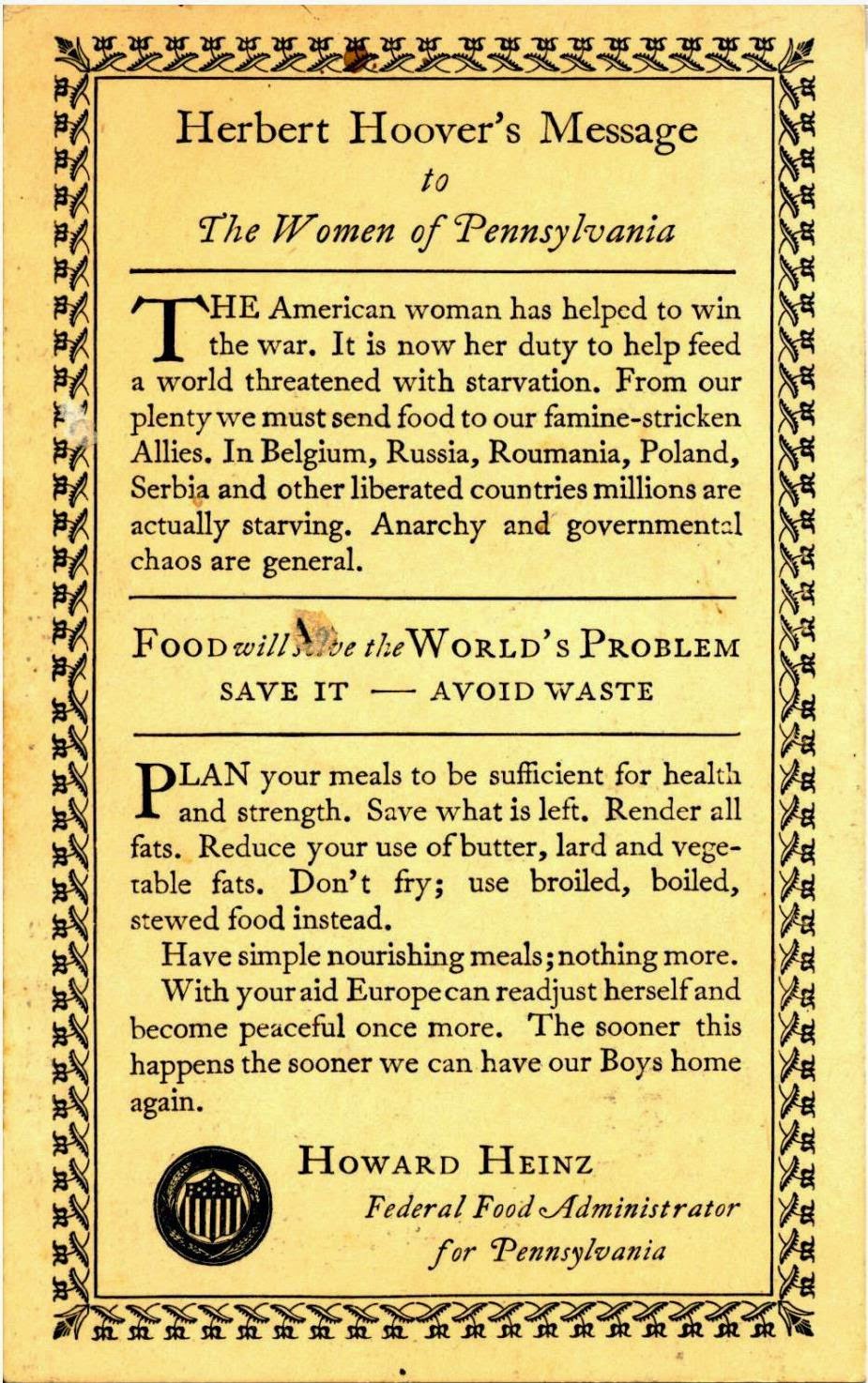 What good is Aid to foreign countries?
Aid is cheaper than war (less that 1% of the US budget even now).
It's good diplomacy and it builds a baseline of trust before diplomats negotiate.
What was Hoover's motivation?
A book portion here has it in Hoover's words:
200 Million People a Day 1914-1921
Between the years of 1914-1921 Hoover was behind the feeding for more than 200 million people daily.

My grandmother's father, Chester Julian Tyson, was a great worker and a friend to many in his sphere of influence.

This post can is just a snapshot of one of the many tasks he undertook willingly.

Further reading on the Great Relief Effort, a 2005 BBC story below:


The huge American undertakings that fed millions of people during and after the World War I rescued not sections of populations but whole peoples. Today they have been largely forgotten.


Yet 10 million people relied on food shipped in during the German occupation of Belgium and Northern France between 1914 and 1918. Tens of millions more were kept alive right across continental Europe after the war.


These operations saw nearly 11m metric tons of supplies delivered at a cost of nearly $3bn -- and that is the dollar amount from the time. The US government ended up paying for most of it, though Britain and others did contribute.


In 1921 there was another massive operation to help a further 10 million starving in the Soviet Union. Even so, an estimated one million people died in that famine.


The common factor in all these operations was a man who later became an American president reviled for not doing enough during the great depression - Herbert Hoover.


Between 1914 and 1922, he certainly did something. He got money from governments and charity, sailed his own fleet which flew his flags, took over railways, set up a telegraph network, issued his own passports, made treaties with governments, negotiated safe passages through war zones on land and sea and saved countless lives.


It was not a charity he ran. It was an industry. It was almost a state.


Herbert Hoover was a successful mining engineer and businessman in London when war broke out in August 1914.  [He] lead a relief effort when it became apparent that Germany, under a naval blockade by Britain, was not able or willing to feed the people under its occupation in Belgium and North East France.


Hoover set up the Commission for Relief in Belgium, and, as a neutral American, negotiated with the British and the Germans. The British were suspicious and Hoover was even accused by the Admiralty of being a spy. He used the same argument with both sides - the United States would look more favourably on them if they helped civilians. They did so.


….The operation continued even when the United States entered the war in 1917.  It all cost money of course - more than $800m, much of which came from the United States. Belgium and France took out loans to pay for some of it but these loans were abandoned in the Depression of the 1930s.


A history of the operation concluded: "It may be pointed out that a large portion of the 10m people in the occupied regions might have perished."


With America in the war, Hoover was sent to organise food production and distribution at home. So successful was he in getting people to economise that the word "Hooverise" took its place for a time. His efforts meant that there was enough food to spare to send to Britain and France.


Then came peace. He now had to feed millions in the defeated countries as well, including Germany. Through the American Relief Administration (Ara), he organised the distribution of nearly 6m tons to almost every country in Europe.

Posted by PastRemains at 08 November