Elisha Pratt was born 10 Aug 1707 in Colchester, New London, CT and he died 19 Sep 1791 in Spencertown, (controversially at the time, Albany County, but is now Columbia County), NY.

Elisha Pratt, was the son of Joseph Pratt 4 (Sr) [B 1671, Hartford, CT D 1740 in Colchester, CT] and Sarah Collier (Collyer), his grandparents on his mother’s side were Joseph Collier and Elizabeth Sanford of Hartford CT.

MOVEMENT OUT OF HARTFORD

Three of his brothers Daniel, Azariah and Joseph Pratt Jr to Kent, CT. Whereas Elisha, David, Joshua, and Joel moved to, or are connected to the Spencertown, NY area. Elisha settled in Spencertown and as a deacon in the church there in Spencertown. He and his wife are buried in Spencertown graveyard behind the church.

Elisha Pratt Served in the French and Indian War in the Connecticut Regiment under Phineas Lyman. He was a major (1762).

The Revolutionary War was a great divider. Naturally, there were colonists who had no strong opinion either way on the matter, but there were evidently plenty of colonists who felt one way or the other. Elisha and Ann Pratt’s daughter Ann had married to John Savage. Savage was an outspoken supporter of England, called a “Loyalist. (See this post
Ann Pratt & John Savage)

Elisha and the other Pratts though were not Loyalists. In fact, Elisha is the first ancestor I have found evidence that he served on one of the Committees of Correspondence.

The Albany Committee of Correspondence was set up right after the first shot was fired in Massachusetts. A David Pratt (who I take to be Elisha’s brother) was very active in it. The Albany Committee was divided up into geographical sections most of which are roughly comparable to the way the area is currently divided now: Albany, Schenectady, Rensselaer, and Columbia County. (Albany was at the advantage, as the Dutch had established it as a trading post and when the English took it over, they retained the port advantage on the Hudson River.) Albany’s port was the northernmost point where large ships could travel up the Hudson River from New York City, so it was a major city.

There was no America yet, and the area that Spencertown is in was still disputed territory between Western Mass or New York. At the time, that question or quarrel was still going on between the two colonies and not yet settled.

However, Spencertown used Albany as its closest major port, so it was attached to the Albany NY Committee of Correspondence. At the time we were under the King of England the area Spencertown was in was called, the “King’s District” (which is logical, but many places had kept Dutch names, or adopted Indian names). [Later, Spencertown became part of NYS and the county it was in was dubbed “Columbia County.”]

But, you say, how did Elisha participate in the Revolutionary war? He was a member and served on the Albany (NY) Committee of Correspondence for the “Kings District.” 3 as Spencertown was called at the time.

I cannot imagine how difficult it must have been to have his daughter Ann married to a died-in-the-wool Loyalist as John Savage was. She was wed sometime before 1770.

I think the couple, Ann and John Savage, had a rough time as they remained loyal to the King of England.

While Elisha and his wife Anne, as well as their other children all were supporters of the "rebel" (American) side.

Eventually, his daughter and husband John Savage moved (twice) to Canada after the war, and were pioneers in the settlement of the town of Bromont in Quebec.

While the family was divided for a long time, evidence suggests that the family remained connected. The daughter who married John Savage and moved to Canada also had a nephew (a Pratt) live with them for a time in Canada. 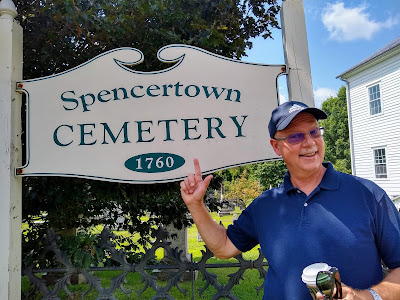 2 Massachusetts Historical Society Coming of the American Revolution: The Committees of Correspondence (masshist.org)

5 For more on Spencertown and the Pratts, see: The Peculiar Story of Spencertown; published by The Society for the Preservation of Hudson Valley Vernacular Architecture, Vol. 18, No. 4-6 April-June 2015   http://hmvarch.org/news/2015-04-05-06-news.pdf

Posted by PastRemains at 17 December