Samantha was the schoolteacher to the Kendall children (and others) in a rural one-room schoolhouse. Little did she know at the start of her teaching job, that she’d end up married to a father of some of her students.

I don’t know how much they earned, but based on my understanding of the area and the era, she may have been paid in produce and the like. It was a small country school, much like many others that dotted the Eastern Townships of Quebec at that time. It probably resembled schools in this website: Eastern Townships Schools
I am guessing it was small then (Lawrenceville has a population of 662, Stukely and West Ely are tiny crossroads). 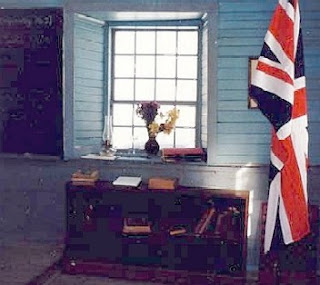 When she was 20 she married the widower, Joseph Ward Kendall, on 30 May 1860 in Lawrenceville, Shefford Methodist Church in Quebec, Canada. (Was it love, or maybe there were no better prospects?)
As mentioned in an earlier blogpost about her son Luke, her husband Joseph Ward Kendall was 20 years older than his new wife.
Joseph Kendall, born in 1820, was the son of Henry Kendall and Dorothy Thankful Parker.

Their Family:
Their first surviving child together was Isaiah Johnston Kendall born on 4 Sep 1863 in Lawrenceville, Shefford County, Quebec, Canada.
Their second son was my husband’s great grandfather
Luke Hale Kendall, was born 27 Dec 1866 in Lawrenceville, Shefford County, Quebec, Canada (died 1948).
The couple went on to have:
3 Gardner Ward Kendall (1871-1935)
4 Dorothy Vermilia Kendall (1874–1941)
5 A son Alpheus Gordon Kendall (1876-1956)
6 Florence Marion Amanda Kendall (1878-1935)
7 Jennie Grace Kendall (1886-1908)
Prior to the birth of her last child, in 1881, her father, Stephen Allard died.
By the time little Jennie Grace was 4 or 5, by 1891, the family had moved and were living in Waterloo, Quebec, a city of some size.
Within 7 years her husband died, on August 5 1898 in Waterloo, Joseph was 78 years old.
Ten years later, her daughter Jennie also died at the age of 22 in Massachusetts.
Samantha lived on for a while in Waterloo.
Death:
She died in 1913.
I found her death recorded in Folio 3 of the registers for Masonville Methodist Church, Quebec says “Samantha Elizabeth Allard, age 73 years, 6 days, relict [widow] of Joseph Kendall died on this date” it was April 16, 1913.
The Waterloo Advertiser Apr 25 reported she died "after many years of suffering from rheumatism."

Family Photo:
Seated, middle: Joseph Ward Kendall with  Samantha Elizabeth (Allard) and their 7 children.
In the back: Luke Hale, Isaiah Johnston, and Dorothy Vermilia.
Seated in the front : Gardner Ward, Alpheus Gordon, Florence, and on Samantha's lap is Jenny Grace.


Burial:
Joseph and Samantha Allard Kendall, as well as many other Kendalls and relations are buried in the Waterloo Graveyard (Protestant).

Photo Credit:
Copy of the original photo of the family in possession of  Linda Kendall Sawyer of New Hampshire.
Photos of Eastern Townships from online sources.
Photo of cemetery, by myself (AC Johnson)
Posted by PastRemains at 14 September