Newsworthy Obituaries
Obituaries fall into three categories: good, bad and indifferent. Every family historian loves an obituary (not a recent one, of course). But we are picky. We want the obituary to be full, complete and, most of all, accurate. An obituary I held on to for years helped verify my husband's 3rd great-grandparents: Henry J Kendall & Dorothy Parker, and their location.
Searching for this Henry James Kendall
I combed through Ancestry's records first. Then I went to Family Search to  search their collections. Unfortunately Family Search's data on Henry James Kendall was inconclusive. Most of my records were from Ancestry.
Facts: Henry James Kendall was born in the US, but he died in Canada (where he owned property).
Records said he died in Quebec, Canada. And also that his son (Joseph Ward Kendall) was born in Quebec, Canada.
I didn't know where Dorothy was born.
Fact: Henry Kendall's wife's first name was Dorothy. I had reason to believe her last name was Parker.
Obstacle: I could not find records of their marriage in Canada.

I looked for border crossing records but they, or he, or she had immigrated there in the early 1800s.
This was before border crossing records were kept. Not till the 20th century was the US-Canadian border continuously manned.
In earlier days, New Englanders shuttled back and forth between their homes in Quebec and Vermont, New Hampshire or Massachusetts (this, I know from my husband's other family members' records).
So, I wondered if perhaps they wed in New England then moved to Quebec.

Obstacle: Getting the Right Man/Woman
I need to find Henry James Kendall married to Dorothy (Parker?) either in New England or in Quebec, Canada.
Church records have that information, but volumes of information doesn't mean I have the right man.
And yes, I found a lot of Kendalls and Parkers in New England at the time.  And I found a lot of family histories on the Kendalls. But I didn't find my Henry Kendall--or I did but I wasn't sure it was the right man.

I learned that the Kendalls went in for large families. This meant I found plenty of Henry Kendalls, Dorothy Kendalls, James Kendalls....you get the idea.
So I was stuck with Henry and Dorothy Kendalls in New England. I wondered if I should dig through the Quebec records again. It had been done but there was nothing certain. I was stumped.

Stumbling Over the Information
I found an obituary, but it wasn't "out there" on the internet, or in an institution. I found it here at home, offline.
I needed concrete evidence of my Henry Kendall. But by now I was frustrated by information overload. And, in a fit of frustrated anger, I searched (that means I dug through) my resident computer files with one word: "Kendall"
There it was-the skeleton key. Buried in my computer, I stumbled on two obituaries I had downloaded and saved. One was more recent and then there was one the other one which "opened up the door."
I had forgotten that I had saved this obituary to my computer 6 ½ years ago. (Tip: keep your computer indexed!)
No, it wasn't Henry James Kendall's obituary, nor his wife's, but someone else's.  But that was all I needed. So yah, it was a good obituary (even though it wasn't his). Below is the gleaned information:

Whose was it and what happened next?
Obituary Data
The obituary was for Mariah (also spelled Maria) Kendall, their daughter, who was sister to my husband’s ancestor Henry James Kendall.
Daughter of Henry J Kendall & Dorothy Thankful Parker
>>Mariah was the daughter of Henry James Kendall and Dorothy Thankful Parker. On March 17, 1841 in Lawrenceville, Canada she married Lyman Knowlton Phillips, son of Oliver and Hannah W. Phillips, and widower of Florina (Lawrence) Phillips. They had 11 children. At some point she and her son Lafayette moved to the US (he was born in 1862).<<
I knew Joseph Kendall (son of Henry and Dorothy) had a sister Maria(h).
This obituary made me guess Mariah was born ca 1820 and likely in Quebec, Canada.
If Mariah was in Canada in 1820, likely her mother was, and perhaps her brother Henry James Kendall.
Next mission:
to find out where Henry J Kendall and Dorothy Parker were wed.
Since I had some traction I decided to circumvent the US databases and dig in to the Canadian database.
I "Traveled" To Canada (via Ancestry.CA)
My husband has deep Canadian roots, so I usually get a Global Ancestry subscription for my birthday gift. This way I can search N. American (Canada) records.
I logged into Ancestry.ca -- the Canadian Ancestry site. Doing this I have found makes searches in Canada more targeted. I get quicker results.
HUZZAH!
It brought me immediately to a:
“Henry Rindall” who married a Dorothy Parker in Canada in 1818.
I looked at the image (one always should).
I was right: it’s my husband's “Henry Kendall!” Hooray!
>>Henry Kendall and Dorothy Parker were wed 30 Mar 1818 in  Quebec, Canada.<<
Their respective residences are in the Eastern Townships of Quebec.
Here’s the image: 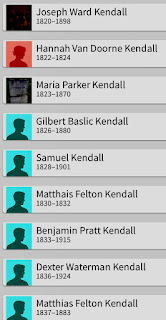 Posted by PastRemains at 19 July