Birth
Barnabas McGee was born about 1742, believed to have been born in Northern Ireland (likely Ulster).

New World and Marriage
Barnabas immigrated to Pennsylvania where he married Ann (Nancy) Carroll of London, England.
I'm fairly certain they departed for Canada from the port of Philadelphia.
Prior to departing they lived in PA, New Jersey or nearby.

Move to Canada, to Pictou
Originally Pictou, Nova Scotia was awarded by the King of England to a handful of subjects who agreed to settle it for England.
The King's permission contained a complex mandate about clearing the land and planting crops, and establishing a town all within certain time parameters.
It tells you something about the scramble for territory.
The very best land was already held by the earliest settlers (all British subjects) before Barnabas and Nancy even left for Canada.
The map above of Eastern Canada will give you an idea where Nova Scotia is relative to other provinces of E. Canada.
The settlement they left for had been nicknamed Pictou "New Scotland" for the many settlers of Scottish descent.

It was 1767 or 1768 that Barnabas and Nancy packed up and moved to Nova Scotia from PA. (The year tells me he wasn't a Loyalist).
Once there, Barnabas was awarded a large grant of land at Roger's Hill in Pictou.  However, Rogers Hill is a good way from the coast.

Where is Pictou?
Today Pictou is a town in Pictou County, Nova Scotia.

Now you're wondering: "Where is Pictou?"
You may have heard of Halifax, Nova Scotia, the capital of the Province of Nova Scotia.

The map below shows Pictou's location relative to Halifax.
The McGees had a daughter they called Polly in Pictou and the family remained there about nine years.

First White Settlers of Merigomish, Nova Scotia, Canada
But Barnabas was not content with his location on Rogers Hill. Though he had a good amount of land, I would guess he -or they-wanted to be nearer the shore.
So, in the fall of 1776 or the spring of 1777 he moved to Merigomish, NS, and settled not far from the shore, but on the eastern side of a river. Oh happy day!

So, How far is Merigomish from Pictou?
If you travel overland, it’s 23 miles (38 KMS) by today’s roads from Pictou to Mergomish.
However, if you go by boat, (I don’t have the nautical miles), but it looks like it’s not more than 6 miles south from Pictou to what is Mergomish. 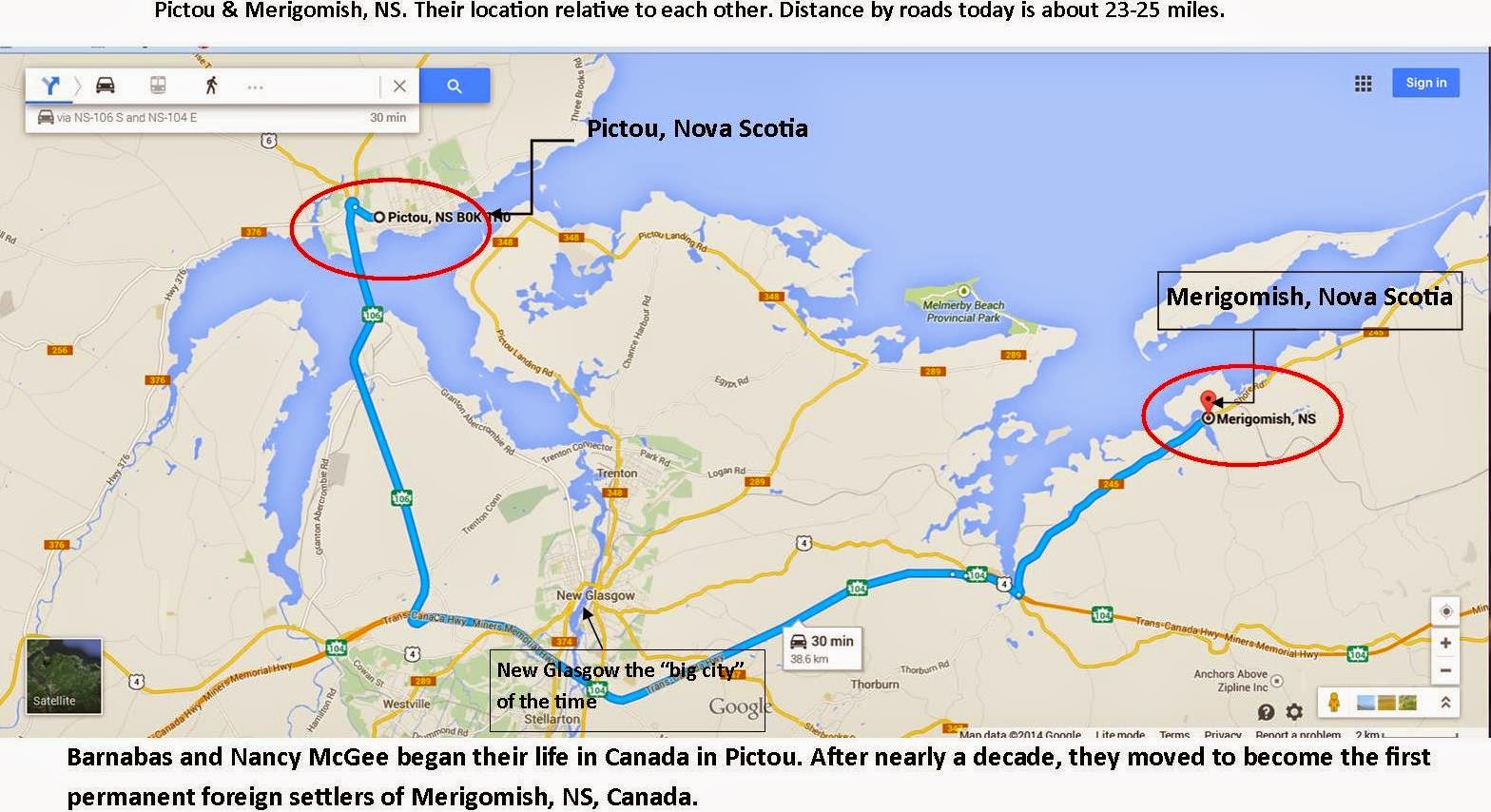 Yes, the McGees now had land near the shore.
And while  Barnabas McGee and Nancy Carroll were officially the first white settlers of Merigomish which comes with its own bit of wondefulness, but it could be a bit lonely.

Barnaby's River, Merigomish
The river they settled by was later called Barney's River after Barnabas, some time around or after his death.
Barnabas and Nancy had four* more children, and they were the first white settlers born in the area.

Work and Staying Fed
Barnabas (“Barney”) was said to be a cooper by trade (cooper makes barrels, casks and the like). He would likely have searched the northern forests for oak.
Eventually however, he (possibly for financial reasons?) turned to shipbuilding and fishing.

"A record from September 1788 says that he sold a good shallop [sloop] 'Nancy' about twenty-two tons, to Hugh Denoon of Merigomish, trader, for the sum of 45 pounds."


Also, there are many records of sales of land by Barnabas McGee. One record of him says that he:

"is still remembered for his hospitality to strangers and travellers."


Two Deaths & the Widow
Barney McGee and his son, Barnabas, set out one fall to sail to Newfoundland but never arrived.
They were shipwrecked and drowned. Their bodies weren't found until spring -- on the shore of nearby Cape Breton.
His widow Nancy was then on her own.
It was said that she made a name for herself.
She always ministered to the medical needs of her neighbors. For example, there is one record where she removed frozen fingers from the survivors of a ship wreck.

Nancy was often called upon to help out at the most inconvenient times.
When there was too much snow, she'd don snowshoes to facilitate her trek to help those in need.
Land Granted to the Widow McGee
Nancy was given a grant of 500 acres of land for her "public services" (I'm not sure what that means). She sold the land for 250 pounds.
Barnabas McGee Facts
* Born in County Ulster, N. Ireland
* Emigrated to PA
* Married Ann (AKA Nancy) Carroll of London, England
* Moved to Pictou, Nova Scotia, Canada 1767/1768
and received a land grant on Rogers Hill in Pictou.
* Remained there for almost a decade.
* Moved in 1776 to become the first white family settled in Merigomish, Nova Scotia
* Death by drowning (he and son Barnabas)