Vitals: John Levi Cook
Son of John Cook (b 1805) and Cynthia Metcalf
He was born abt 1841 Ashburnham, MA
And died 28 Nov 1910 in West Bath, Maine
John Levi Cook married Christiana L Petts (my husband's 2nd great grandmother)
She, Christian L Petts, was born in 1845 in Stoddard, NH or in Nelson, NH. She died 30 Sep 1871 in Concord and was buried in Keene, NH
She had given birth to their only child in late June of the same year.
Their son was Don Ferdinand Cook (great grandfather of husband) who was born 24 Jun 1871in  Keene, NH and died 16 Dec 1939 in Keene, NH

John L. Cook of the Union Army was assigned to the 21 Massachusetts Infantry (21st Regiment, Massachusetts Infantry), Company G.
His rank when he mustered in was as Musician, and his rank when he mustered out: Principal Musician (he was a drummer).
A family source, Bob Cook, wrote in the 1990's that, "His drum is still owned by the family.”
Maryland
John L Cook was involved in guard duty to protect railroads in Maryland, quite possibly in Baltimore secured by Union troops as it had a large number of Confederate sympathizers.
The General who led this was from Massachusetts as was his regiment.
North Carolina/VA border
He was then in North Carolina under General Burnside–likely in the opening phase of what came to be called the Burnside Expedition at the Battle of Roanoke Island, an amphibious operation of the American Civil War, on February 7–8, 1862.
This was fought in North Carolina Sounds, a short distance south of the Virginia border.
After this, John L Cook was with General Pope's fight at Sulphur Springs at what is called “The First Battle of Rappahannock Station” in August 1862, in Culpeper County and Fauquier County, Virginia. The two armies fought a series of minor actions along the Rappahannock River, including Waterloo Bridge, Lee Springs, Freeman's Ford, and Sulphur Springs.
He then went a bit further north/west to:
1st - The Second Battle of Bull Run or Second Manassas, Virginia, August 28–30, 1862 and
2nd - To the Battle of South Mountain, MD, September 14, 1862
3rd - He fought in Maryland at the Battle of Antietam in Maryland (a very bloody battle) on September 17, 1862.
Fredericksburg, Virginia
Then the army turned south again to Fredericksburg, Virginia.
By November 1862, his army was perched at the Rappahannock River opposite Fredericksburg, VA.
The Confederate army established a strong defensive position across the river in the town.
After waiting for weeks for the the arrival of pontoon bridges, the Union general finally began to look for places to cross the river to attack.
Not until December 11 did the Union cross the Rappahannock to attack the Fredericksburg.
On December 13, 1862  Lee defeated the Union army at the Battle of Fredericksburg (VA).
The Union retreated back across the Rappahannock River under cover of night.
Unfortunately John Levi Cook was shot in the knee at Fredericksburg and captured very likely during battle of December 13, 1862.
John L Cook is freed on the field. Probably not an escape but a parole. The armies usually didn't have the time or the resources to handle prisoners; they were “paroled.” Parole was a sort of solemn promise to not return to your Army until you were exchanged for another prisoner.
However, in practice it meant most men took their papers and went home permanently.
John Levi Cook mustered out of service in 1863, but since it was December 1862 when he was captured then loosed, he probably formally mustered out once he made his way out of Fredericksburg.

At some point he made his way north. His home was on the Mass/NH border and some how he met (or re-met) Christiana Petts from a town north of Keene, New Hampshire. I can only speculate. Perhaps they knew one another prior to the war?
They wed in New Bedford, Massachusetts on April 8, 1868. She had a child, Don Ferdinand Cook (my husband's great grandfather) in June of 1871, but died only a few months after childbirth.
John L Cook later married Abbie Everline Clifford.
He spent the rest of his life in Maine. Why he went to Maine, I don't know. He worked (or owned) in a store in Winnegance, Maine like this one pictured (owned by the Perrys in Winnegance, Maine). Later in life he was the postmaster in Phippsburg, Maine. 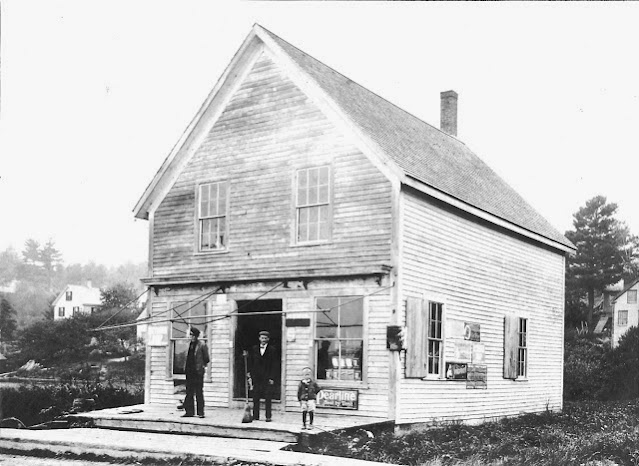